Iran to pick up oil exports?

Head of Commodities and Portfolio Manager

Recent weeks have been eventful on the oil supply side. The cyberattack on the Colonial Pipeline that supplies fuel to the southeast of the United States increased gasoline prices on the East Coast to beyond three U.S. dollars per gallon. At the same time, it is being rumored that sanctions on Iran – among them those affecting oil exports – might be lifted. Iran is already preparing to ramp up production and might be able to increase production to four million barrels per day.

The outcome from the April 27 OPEC meeting was, as we had expected, to skip the full ministerial meeting and recommend no change to policy. While ministers and representatives sounded concerned about a drop in Indian demand because of a very high number of Covid cases there, ultimately the decision was to await further developments. This is a deviation from their stated "proactive" approach, but it appears that OPEC feels relatively confident that global oil demand will remain unscathed. The next meeting will be held in early June.

We continue to be constructive on oil prices, with inventories being drawn down for eight consecutive months and OPEC managing supply with enough flexibility to pull barrels from the market if needed. OPEC compliance has also been good. While we expect that demand concerns globally are likely to continue to sway investor sentiment in the short term, near-term fundamentals remain robust. We have confidence in the market's ability to absorb additional supply this summer, but we expect to see volatility in the oil price due to the many uncertainties around demand.

A report by the International Energy Association has caught our attention because it underscores how demand for minerals is being driven up by new clean-energy technologies. The latest World Energy Outlook Special Report[1] outlines how solar photovoltaic (PV) plants, wind farms and electric vehicles (EVs) require more minerals to build than their fossil-fuel-based counterparts. The reports state that "A typical electric car requires six times the mineral inputs of a conventional car and an onshore wind plant requires nine times more mineral resources than a gas-fired plant." The IEA writes that since 2010 the average amount of minerals needed for a new unit of power generation capacity has increased by 50% as the share of renewables in new investment has risen.

Given that it takes over 16 years from exploration to production of mines, we feel that there are even more reasons to be upbeat about base-metal prices. Demand is increasing and it will take time for supply to catch up. It is true that the near-term headwind of a second wave of Covid-19 could dampen investor optimism, despite the positive developments on the vaccine and economic-stimulus front. We, however, continue to prefer industrial metals, such as copper and aluminum, over precious metals as we expect the reflation and reopening trade to remain in the driver's seat for metals prices.

Precious metal prices – in particular gold – remain trapped between a macro backdrop that remains generally supportive (negative real interest rates and lingering macroeconomic risks) and a market that continues to price in reflation and reopening risks. In the short term, we believe gold prices will likely require a new catalyst to break out of the recent range driven by real rates and U.S. dollar movements.

Finally, on the agricultural front, strong demand persists. However, some improvement in the weather outlook might lead to underperformance in wheat and cotton prices.

By contrast, corn and soybean prices have continued their surge higher as Brazil's corn crop is increasingly pressured by drought and China is continuing its buying spree. We continue to overweight corn and soybeans. 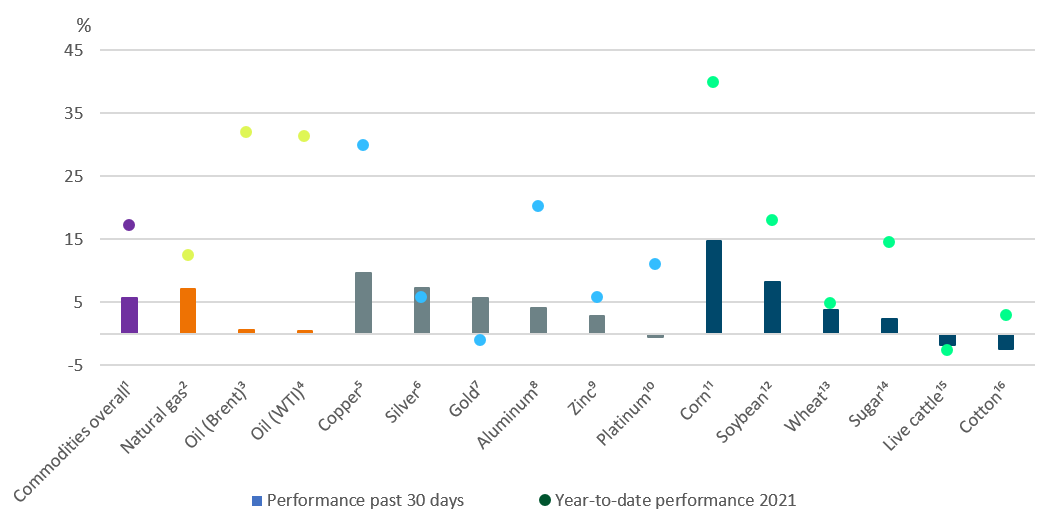 Past performance is not indicative of future returns.
Sources: Bloomberg Finance L.P. and DWS Investment Management Americas Inc. as of 5/19/21

The relationship between the spot price for oil and bond-market expectations for long-term inflation rates has become tighter than ever.
Oct 20, 2021 Europa