Where has all the cash gone to?

"Where have all the flowers gone?" American singer and social activist Pete Seeger asked back in 1955. Nowadays the question might be: "Where has all the money gone?"

Central banks are inflating their balance sheets worldwide at record speed, bringing beads of inflationary fear to the foreheads of many consumers. The U.S. Federal Reserve's (Fed's) balance sheet was equivalent to 18% of gross domestic product (GDP) a year ago and is now at 34%, having risen at remarkable speed. In Europe, the situation does not look very different: the European Central Bank's (ECB's) balance sheet has already reached 52.8% of GDP, from 40% at the beginning of the year and 20% at the beginning of 2015. Meanwhile, inflation continues to grow at a barely visible pace – by less than one percent currently in the Eurozone. And yet there is an empirically proven correlation between the money supply and (core) inflation. Part of the explanation is that, at nine percent year-on-year in May, the Eurozone's growth in broad money supply M3 is by no means exceptionally strong. What is going on?

The answer is that central-bank money creation and the broad money supply are not the same. The ECB provides commercial banks with liquidity (e.g. via TLTROs) or buys securities from them (e.g. within the framework of the Pandemic Emergency Purchase Program). The corresponding money base is growing very strongly (and leading to the rapid expansion of the ECB’s balance sheet mentioned above). But central-bank money is converted to broad money, M3, only when the commercial banks lend more money. At present, the banks are hardly doing that. Lending to the private sector in May has grown at a nominal rate of only about four percent year-on-year. Loans to the public sector have grown more strongly, by 11% in May, because of the government’s need to respond to the coronavirus pandemic, but even this figure is modest given what is happening with central-bank balance sheets.

So where is the money going? As our Chart of the Week shows, almost everything ends up in excess reserves: in other words, the liquidity held by commercial banks at the central bank in excess of the regulatory minimum reserve requirement. Martin Moryson, DWS chief economist for Europe, sums it up as follows: "On the positive side, Europe's banks are unlikely to suffer any liquidity shortages in the short term. On the negative side, they are hoarding money because they do not fully trust the economic recovery and because there is a lack of demand from creditworthy borrowers." So, unfortunately, the low inflation figures give us little to cheer about. 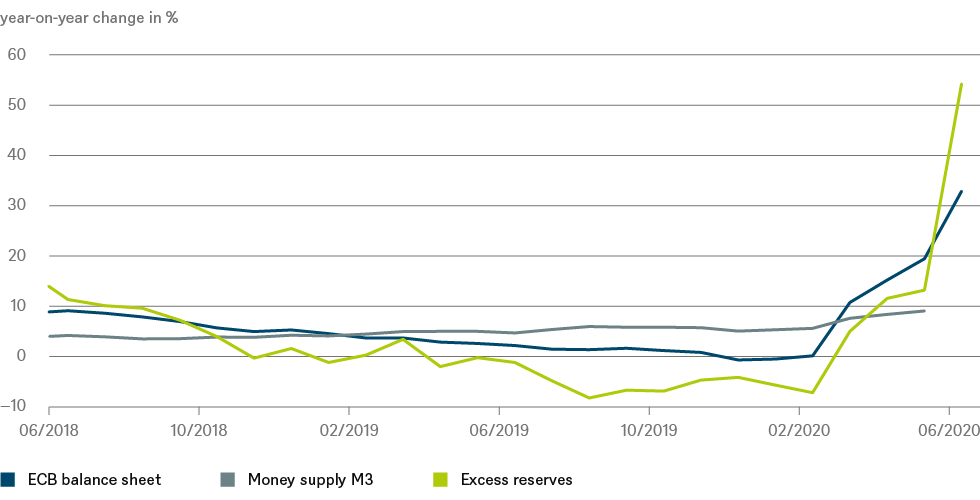 Higher inflation might persist for a while longer
Jun 11, 2021 Macro

Plans to revamp the international rules on corporate taxation are the latest sign of the political pendulum swinging in favor of labor.
Jun 04, 2021 Macro

Inflation made in China

China's producer price inflation could soon reach a new peak. This is not, however, a harbinger of consumer prices spiraling upward too, nor for new monetary tightening.
See all articles