How deep the crisis could be remains uncertain. The size of many aid packages, however, is rather concrete. Equities should be among the relative winners.

How would we have positioned ourselves if we had known ahead of time which topics markets would be confronted with this year?


Of course, some of these seemingly unusual developments and synchronized movements in different asset classes can be explained by the fact that when the market stress is greatest, cash is king – and some investors have to part with gold, U.S. dollars or U.S. government bonds in order to get the liquidity they need. The parallel recoveries in markets can also be explained in part by the U.S. Federal Reserve (Fed) rescue packages, since the newly created liquidity (the Fed balance sheet has expanded by almost $2 trillion since the end of February alone, to over $6 trillion by now) has to flow somewhere. The Fed pushed further into what had previously been a taboo zone on Thursday, April 9, when it announced that under specific circumstances it would now also buy U.S. high-yield bonds. This takes pricing in the capital markets a little further into the realm of absurdity, with negative impacts on efficient capital allocation in the longer term. In the short term, however, there is a simpler and familiar lesson from the past: Don't fight the Fed. The Fed is representative of many central banks that in recent weeks have put together monetary rescue packages more quickly and boldly than ever before.

But what we believe the above examples illustrate above all is the difficulty of "timing" the market. To catch the highs and lows for entry and exit would have been difficult in some cases even with a crystal ball that could look into the future. History has shown that in times of crisis you can do more harm than good with short-term trading. What this also argues against is major over- and underweights in portfolio allocation. What it argues for is broad diversification, which should help to withstand sudden market storms relatively well.

Nonetheless, a major exogenous shock like the virus gives rise to a number of long-term shifts that one can and should prepare for. The virus will affect economies for much longer than we could have imagined at the beginning of the year. And the aid packages from governments and central banks will also leave a lasting mark. Debt levels will reach new record levels in many nations (not only in absolute terms but also as a percentage of gross domestic product (GDP)). In addition, financing of the government by central banks, by now indirect in name only, is likely to create a familiar dilemma: many central banks won’t be able to tolerate substantial and sustainable interest-rate increases. Therefore, they will probably switch to some form of yield-curve control (YCC). However, this likely means that inflation can only be avoided in the short term. Long-dated government bonds have therefore lost much of their appeal, while equities have become even more attractive, especially from a longer-term perspective.

The ever-growing influence of central banks

Total balance sheet of central banks as percentage of GDP in the G4 economies (United States, UK, Japan and the Eurozone)

Given the high degree of uncertainty regarding the length and extent of the economic downturn, companies with strong balance sheets from defensive sectors such as healthcare and communication services remain our preference, complemented by technology stocks that also enjoy strong balance sheets and which should be among the relative beneficiaries of the crisis. Digitalization, and especially the use of artificial intelligence, is likely to be a positive factor. ESG (environmental, social and governance) is also a long-term trend that should be kept in mind when selecting stocks.

In our opinion, government bonds have lost some of their overall attractiveness in a multi-asset context as a result of the crisis. Ever lower yields for developed-country government bonds – provided the government’s finances are relatively sound – seem set to remain in place for at least a year or two. Corporate bonds are thus moving somewhat more into focus, especially investment-grade corporate bonds in Europe and the U.S. However, in certain sectors, we consider the more pronounced spread widening to be appropriate in view of the higher probability of default. This crisis has also highlighted two weaknesses in the corporate-bond segment: low liquidity on turbulent days and little scope for diversification compared to equities, as both fell in tandem. On the other hand, corporate bonds from the U.S. and Europe are now benefiting directly from central-bank purchases – unlike bonds from emerging markets. In addition, many emerging-market countries are struggling with the stronger dollar, lower commodity prices and the severe impact of the coronavirus lockdown on global trade and tourism. We are therefore selective with regards to countries and opt for hard-currency, not local-currency, bonds.

In view of the lingering uncertainty over how quickly the virus can be contained and how great and long-lasting the damage will be before the economic recovery begins, we expect volatility to remain high and cannot rule out further setbacks and corrections. To help stabilize portfolios, we continue to prefer gold as well as the yen and the Swiss franc as classic crisis currencies. While in the short term the dollar should continue to be in demand on troubled days, we take a somewhat more critical view of it in the medium term. The record-high level of new U.S. debt as well as the way the coronavirus pandemic is being handled in the United States might well have undermined trust in the greenback.

When markets get tough, even so-called safe havens can suffer from the rough seas. Immediate liquidity needs weighed on both the dollar and gold. 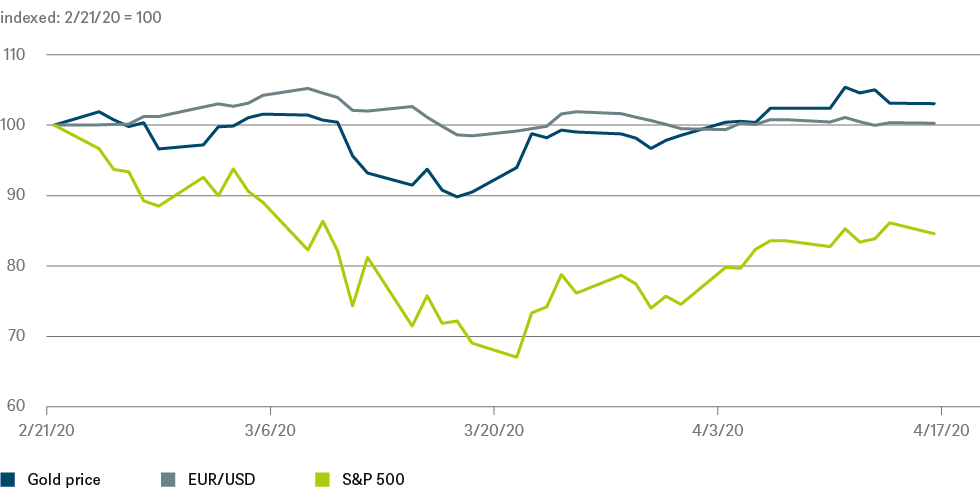 
Markets have moved fast in both directions, but we are staying the course.

In view of the medium-term prospects, our model portfolio retains its preference for equities and bonds with risk premiums, as well as commodities. We made minor adjustments to express a small preference for equities in the U.S. (reflecting quality and structural growth themes) and emerging markets, where China in particular should be the first to overcome the coronavirus. In the bond segment, we believe building up a small position in U.S. investment-grade corporate bonds at the expense of similar securities from the Eurozone could be appropriate. We would also prefer a higher degree of liquidity in the current market environment, which can also be expressed in having a slightly increased money-market position.

The chart shows how we would currently design a balanced, euro-denominated portfolio for a European investor taking global exposure. This allocation may not be suitable for all investors and can be changed at any time without notice. Alternative investments involve various risks and are not necessarily suitable for all clients or for every portfolio. Source: Multi Asset Group, DWS Investment GmbH as of 4/8/20

In view of the medium-term prospects, our model portfolio retains its slight preference for equities and bonds with risk premiums, as well as commodities. We made minor adjustments to express a small preference for equities in the U.S. (reflecting quality and structural growth themes) compared to European equities. We also added to Asian emerging markets, while reducing export-driven Japanese equities. In the bond segment, we made no changes and also left the cash position unchanged.

The chart shows how we would currently design a balanced, dollar-denominated portfolio for an Asian investor taking global exposure. This allocation may not be suitable for all investors and can be changed at any time without notice. Alternative investments involve various risks and are not necessarily suitable for all clients or for every portfolio. Source: Multi Asset Group, DWS Investment GmbH as of 4/8/20

The prospects shown by the three indicators are quite bleak

Trade conflict between the United States and China dominated 2019. In 2020 the rapid spread of the new coronavirus, SARS-CoV-2, has been the only game in town. The measures taken by governments to contain it are the main driver for capital markets, and especially equities. No one can say at the moment when the health crisis will have peaked but all investors seem to be aware that the economic consequences are serious.

The macroeconomic picture sickened a little even before the emergence of the coronavirus. The DWS macro indicator pointed to a significant weakening in the global economy in early 2018. There were signs of slight improvement since autumn 2019 and a stabilization afterwards, but the economic slump that the pandemic has begun to provoke pushed the indicator down to very low levels again this month. The DWS risk indicator also paints a negative picture. At the end of February, shortly after some stock markets had reached new record highs, the risk indicator fell into negative territory and has since been urging extreme caution.

Currently, the only ray of hope is the DWS surprise indicator, at least if you take the data at face value. It turned positive in mid-January and has remained stable at a very high level ever since. This suggests that the expectations of the analysts have become too negative too quickly so that the published economic data has repeatedly provided positive surprises for almost three months. However, it may also be partly due to the fact that much of the data was collected before the outbreak of the virus, while market expectations already fully reflect the likely impact of the crisis.

In recent months, the macro indicator seemed to be recovering. Recently, however, it has fallen back to the bottom third. The weakness now extends to all sub-indicators, with one exception: South Korean exports have already turned around and are in positive territory.

According to the risk indicator, investors' appetite for risk disappeared completely soon after the record highs on the stock markets. Without exception, all sub-indicators are deep in the red zone.

The surprise indicator has been in positive territory since mid-January, although the picture is not uniform globally. The regional sub-indicators are subject to a certain degree of rotation. Currently, positive surprises predominate in Europe and Asia, while negative surprises dominate in the United States. However, much of the European data reflects a snapshot of the situation at a time when the crisis had not yet fully materialized.

Shortages? Not in the nexus between the physical and digital world
Oct 14, 2021 Equities

Some markets have been correcting since September, as inflation could turn out higher and growth lower than hoped. But even then, the markets may have some scope to advance.
Sep 27, 2021 Equities

A different sort of China shock?

Markets have come well through summer as companies made decent profits and interest yields remained ultra-low. The conditions are good for equities.
See all articles