In response to the economic damage, ample liquidity should continue to create opportunities, especially in corporate and higher yielding bonds.

We live in turbulent times. For observers of global economics or politics, that might sound both obvious and like a bit of an understatement. In credit markets, however, the summer has been anything but turbulent, ever since the market panic receded earlier this year. So, it is worth reminding ourselves of the tempestuous backdrop – before explaining how this current period of tranquility has come about, how long it might last and how investors might benefit.

In response to the economic damage from the Covid-19 pandemic, numerous fiscal rescue packages have been implemented around the world. Earlier this year, almost a decade after the drawn-out Eurozone debt crisis, Germany and France surprised markets by collectively pushing for the European Union (EU) recovery fund, alongside the EU’s budgetary framework until 2027. These proposals have yet to be passed by the European Parliament, as well as various national legislatures. Nevertheless, the announcement has already marked a decisive break in how investors view Eurozone risks, which could permanently change European capital markets.[1]  Already, the new EU recovery fund has significantly benefitted highly indebted countries such as Italy. Rating agencies are taking this new source of support into account, resulting in a lower likelihood of credit downgrades and, in turn, lower borrowing costs.

Adding to the support in the Eurozone and elsewhere, all major central banks are executing bond-purchase programs and remain extremely dovish. To fight the effects of the pandemic and the resulting unprecedented slump in economic output, there has been plenty of additional monetary stimulus. Quantitative easing has become an established and accepted monetary-policy tool. Rates look set to remain low for quite a bit longer than most would have thought likely not so long ago. For one thing, high and increasing levels of public- and private-sector debt would make it very hard and risky indeed for central banks to withdraw the stimulus.

Already, the U.S. Federal Reserve (the Fed) has indicated that it will probably be years, before it even starts thinking about increasing short-term interest rates. Its new monetary-policy framework partially unveiled at its annual Jackson Hole meeting looks more like a natural evolution rather than a clear break. The idea behind average inflation targeting is that the Fed can be flexible in order to reach its newfangled average inflation target of 2%. In the prevailing environment, this should give the Fed more room to keep rates low, supporting our thesis of “low for longer." The bigger monetary problem of the past 10 years has been that the Fed and other central banks found it difficult to persistently get inflation up to 2% and it is by no means clear that things will get any easier when the pandemic is finally over. The reality is that the Fed has almost no ammunition left, even though it has to maintain the illusion of omnipotence.

The result of the ultra-dovishness of central banks has been that more and more government bonds from industrialized countries trade like those in Japan. Even for long durations, nominal interest rates are mostly close to zero, pushing real yields into negative territory. The change has been starkest in the United States. Yields on 10-year U.S. Treasuries, currently at around 0.7% (as of 9/14/20), have been trading at or near historic lows since mid-March. At least as far as the next few months are concerned, we believe it would probably take quite a dramatic catalyst to move U.S. rates, and with them much of the rest of the global financial system, off the current baseline.

Among such potential catalysts, one possibility remains an agreement in Congress on another major stimulus package. However, the prospects for that have been receding. Renewed, widespread lockdowns are another risk. So are the U.S. presidential elections in November. Both the pandemic’s path and U.S. politics remain hard to predict, but that should not blind market participants to the potential risks ahead. The elections in particular bring a very real potential for major economic-policy changes, including higher taxes on corporate earnings and capital gains, which could cause market turmoil. Other geopolitical and economic risks include the ongoing battle over technology leadership between the U.S. and China.

From our perspective, real yields look set to remain very low, supporting equities and thus credit. In addition to government-bond purchases, unprecedented central-bank purchase programs for corporate bonds and structured-finance securities should also support the respective asset classes. And if those programs should not be sufficient, central banks have demonstrated that they are willing to do more. We also remain constructive for Asian and emerging-market bonds, both from sovereign and corporate issuers. Moreover, we see strong upside potential in some specific niches, such as U.S. municipal bonds, though, of course, issuer-specific risks need to be watched carefully.

This takes me to a final, broader message. Given the turbulent times we are experiencing in terms of underlying economic realities, it would be surprising indeed if we didn’t see occasional periods of market volatility. As we saw earlier this year, such periods tend to result in a much higher dispersion of yields within bond segments. That, in turn, means that bond selection is more important than before the crisis. The accompanying chart is quite a good illustration of this dynamic.

Historically, in times of recessions, a larger than usual share of corporate bonds that received investment-grade credit ratings when they were issued have been downgraded to junk. As you can see in the chart, the share of such "fallen angels" has already been rising in recent months, though it remains historically quite low. Both practical experience and academic research suggest that this could bring opportunities for investors able and willing to buy such bonds during periods of crisis, when others are forced to sell for regulatory reasons.[2] Of course, this requires plenty of analysis beforehand – selecting the better credits within the U.S. energy sector earlier this year, for example. For those able to do this bottom-up analysis, though, we believe that active selection could make turbulent times quite rewarding.

At the start of the fall

The share of "fallen angels" – corporate bonds that lose their investment-grade credit ratings – is picking up, but remains far lower than during previous crises. 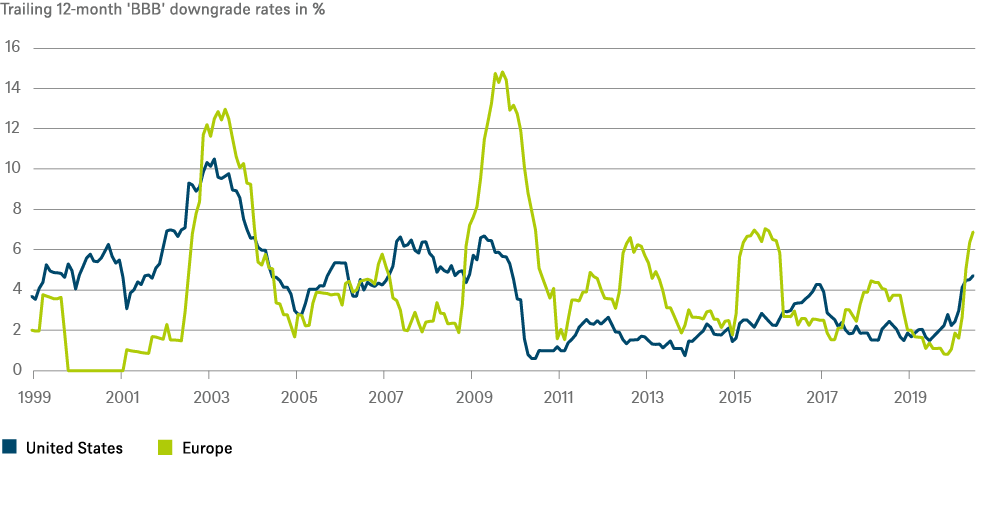 Yields are hovering at zero percent– are the monetary policies of the central banks the sole cause? No, not necessarily. There are clear indications that demographic changes also play a role.

We believe that the wait-and-see, nervous attitude of the markets in September could continue in October. Central-bank support remains important.

As an institution, the European Union is borrowing on a large scale for the first time for its reconstruction fund. This creates opportunities for security-conscious investors.

Everything you need to know about currency risk

How dangerous is currency risk for investors? When is it worth hedging and when not?

Many markets reached new highs in August, stretching valuations even further. Combined with recent political developments this is pointing toward a stormy autumn.