From an investor's perspective April offered little cause for complaint. Almost all asset classes rose, the central banks continued to wave green flags and there was hardly any disruptive fire from politicians. A tax increase on high capital gains mentioned by President Joe Biden served to irritate investors briefly. But in almost all other regards Biden remained the crowd-pleaser, and his various economic stimulus packages may have what it takes to boost America's potential growth.

International relations were less sunny. Tensions rose between the United States and China. Biden's administration hardly misses an opportunity to emphasize how vital it is to keep the strategic competitor in check. There are also headwinds for global trade from another side: supply chains and bottlenecks, first and foremost in computer chips. These are already leading to production cutbacks in the automotive industry and sharp price increases in some areas, such as consumer electronics. Price increases for agricultural commodities are likely to be more politically explosive. Wheat, for example, rose by 20.1% and corn by a full 31.3% in April.

The central banks, in particular the U.S. Federal Reserve (Fed), have nonetheless hastened to emphasize that the inflationary spikes seen so far, and those expected in the summer, are only temporary, and that there is therefore no reason to turn the interest-rate screw or decrease the volume of bond purchases. This has kept markets serene, but investors have taken note of just how strongly the economic recovery remained in April. Consumers and companies are showing a high propensity to buy and invest, and most leading indicators are continuing to rise sharply.-

Vaccinations are a big driver of the recovery. Progress is being made widely, even if the speed of vaccination programs varies greatly. The German government was obliged to send its population into a nationwide lockdown once again in April, but it has also vaccinated more than a quarter of its population, administering more than 1.1 million vaccinations in a day at the end of April, a European record, and the pace is expected to pick up further. The United States is well ahead. More than half the adult population has received at least one vaccination – and the reluctant are already having to be lured with donuts or even cash.[1]‌ And in the UK, where more than 60% of the adult population has received at least one shot, the pub crowd is going in for shots of a different kind: drinking twice as much as before the pandemic – that brewers are having to put in night shifts and ration volumes to prevent individual pubs from running dry.

Except for Japan and India, all the major stock indices have also taken some generous sips from the merry recovery bottle. Thanks in part to incredibly strong quarterly figures, the technology sector has made a comeback – of its year-to-date return of 7.2%, 5.3 percentage points came from April. It was the other way around for the energy sector, which was the worst performer in April with a rise of just 0.2%, but remains the strongest sector so far this year with a gain of 18.3%, thanks to the price of oil, which has become around a third more expensive since the end of last year.

Copper has gained 27% in the year to date, reflecting both the economic recovery and the prospect of numerous government investment programs. These two positive factors are also reflected in the sharp rise in profit expectations for equities. According to Bank of America figures, global earnings revisions are already unusually strong, and in Europe they are at an all-time high.[2]‌ If volatility then also falls to its lowest level since the outbreak of the pandemic, this will please investors all the more. Even the prospect of higher corporate taxes in the United States from 2022, or even a global minimum tax mooted by Janet Yellen, cannot slow down profit expectations: after rises in 2021, further growth is expected in 2022.

Things look less exciting for bonds, where yield spreads, having risen fast so far this year, took a little pause and even declined in some places. U.S. Treasuries therefore rose in price in April for the first time in four months. The yield spread over Bunds (10-year) melted away by almost 20 basis points in April, which was perhaps one of the reasons for the weak dollar.

The biggest loser, however, was bitcoin. After gaining 18%, 35% and 27%, respectively, in the first three months of this year, it suffered a losing month for the first time, even if it was by only 1.7%.

Could this be the last time in the current market that the monthly investment traffic lights appear amid extraordinarily sunny markets? Many market participants are shouting "Sell in May and go away." It is a "strategy" that does not have a bad record. Since 1983, for example, the S&P 500 has performed on average almost two and a half times better in the colder half of the year than in the warmer months. And during just the last 20 years, that factor rises to 3.3 times. And there are other good reasons to be cautious now: 1. The MSCI AC World Index is trading over 80% above its March 2020 low and over 20% above its February 2020 pre-coronavirus high. This is primarily due to higher valuations. Investors paid nearly 16 times estimated earnings just before Covid, and that multiple is now more than 18 times. 2. Central banks are sticking to their loose money guns. But the Fed could use the Jackson-Hole meeting this summer to prepare the market for the beginning of an exit from ultra-loose monetary policy. 3. Even if central banks do not act, investors themselves could push up longer-term bond yields given improving economic figures and a (possibly temporary) rise in inflation. 4. Investors' buying appetite is usually at its highest when there is a legitimate prospect of improvement. Once the improvement has occurred, the euphoria often fades. This has already been seen in many cyclical stocks, whose shares have not been able to benefit from good quarterly figures.

But there are also factors that argue against an imminent market slump. And the first of them is that the slump is one everyone expects. Despite extraordinary exaggerations in sub-segments of the market, there are also signs of cautious investor behavior. For example, in a week of numerous record quarterly results at the end of April, U.S. equity funds recorded net outflows of 3.8 billion U.S. dollars while money-market funds enjoyed inflows of 55.9 billion U.S. dollars. Finally, another major factor helps to make the case against sudden investor disillusionment: 2021 is likely to see the greatest recovery momentum in most countries. And Joe Biden's huge investment initiatives and the fact that European stimulus will not really unfold until 2022 argue against an abrupt subsequent slowdown in growth.

U.S. Treasuries in particular took a breather in April, with their yields stabilizing, but we expect government-bond yields to resume their upward trend soon. Therefore, we have set our rating for 2-year German Bunds and 30-year Treasuries to minus one, which was already the rating for 10-year German and U.S. Treasuries. Despite the central banks' assurances that they do not intend to change their loose monetary policy for the time being, we expect the market's inflation expectations to continue to rise, further pushing up government-bond yields. In the European periphery the situation is different. Both in Spain and Italy the prospects for government bonds look positive. Both countries will benefit notably from the European stimulus program, and Italy took an important step in this direction under Mario Draghi's leadership in April.

In corporate bonds, we expect a differentiated market. While we continue to like investment-grade bonds in Europe because they are likely to benefit from European-Central-Bank (ECB) support and good quarterly figures, as well as relatively low new issuance, high-yield bonds have performed so well this year that their future potential seems modest. This is especially the case as high-yield issuance is likely to remain more buoyant and the higher volatility of Bund yields is having a stronger negative impact. In the United States, the situation looks the other way around and we favor the high-yield sector. In the context of the rapid economic recovery, issuance here has continued to be very well absorbed by the market. We are also positive again on bonds from Asia, favored both by a weaker U.S. dollar and continued good fundamental data.

Due to the weakness of the U.S. dollar we now have a neutral view of the greenback vs both the pound and the euro from a tactical perspective.

In equities little has changed in our fundamental view. In addition to the points already mentioned above, we see strong consumer demand as being likely, particularly in countries with advanced vaccination campaigns. We also see declining risk provisions by banks and rising capital-investment plans by companies after years of restraint. Share buybacks are also back. All of this continues to buoy leading indicators and further boost profit expectations. Real interest rates, meanwhile, remain in negative territory, which makes us keen to profit further from the current positive momentum. From a tactical perspective, this means sticking to our two-pronged strategy: betting on (the more affordable) technology stocks as well as on selected cyclicals, while avoiding classic defensive sectors such as utilities, and telecoms, and also pharmaceuticals, which are facing difficulties in the United States. We have factored in for the first time a likely corporate tax hike. It is likely to reduce average S&P 500 earnings per share by 7%, or from 205 U.S. dollars to 191 U.S. dollars in 2022.

In commodities, we remain tactically positive overall. We do not see any new impetus in oil for the time being, as the economic upswing and the ramping up of OPEC production should balance one another out. But we remain confident on industrial metals, even in the short term, and expect them to continue to outperform precious metals. Palladium, however, is an exception and we believe will continue benefiting from stronger demand for low-emission cars. 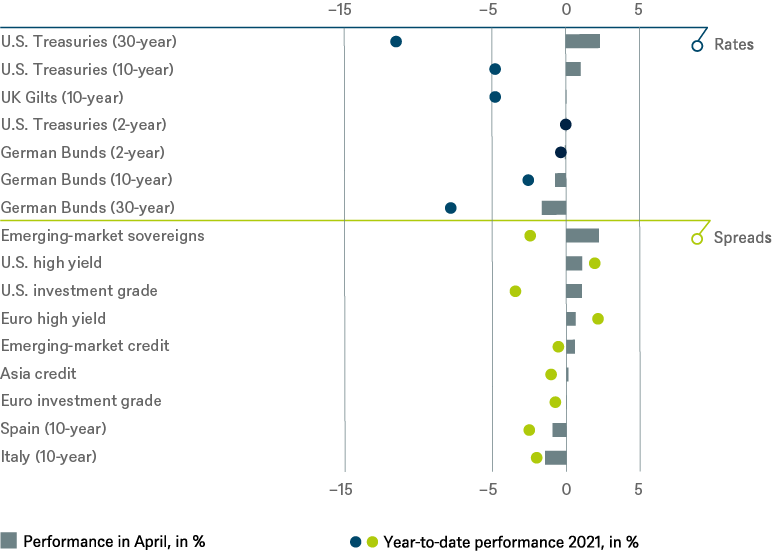 Past performance is not indicative of future returns.
Sources: Bloomberg Finance L.P. and DWS Investment GmbH as of 4/30/21 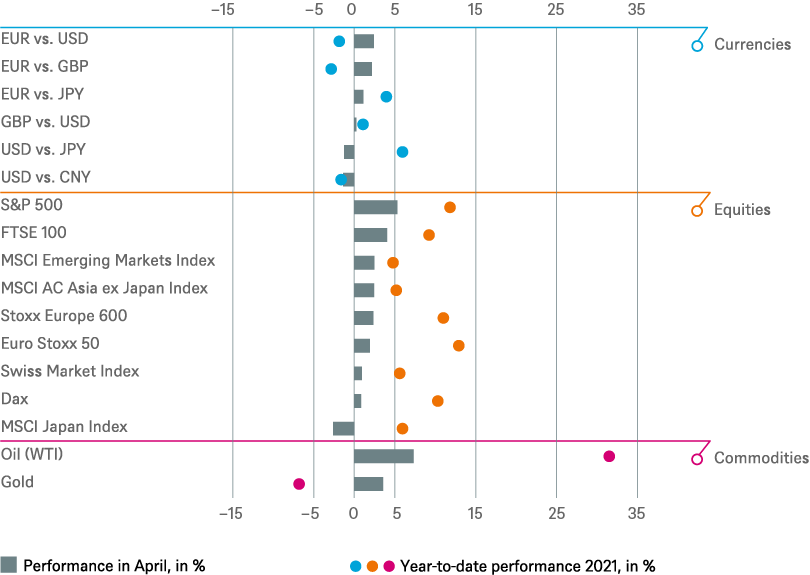 27. Relative
to the Bloomberg Commodity Index