It's official: the U.S. economy entered a recession by March 2020. Not that we disagree, but the speed of the announcement has surprised us a bit. Usually it takes a few more months or even quarters until the recession watchdog, the National Bureau of Economic Research, declares the formal end of an expansion. So, how long will it take until the Covid-19 recession is over? Well, we have seen lots of surprisingly upbeat economic data lately. We, however, still do not subscribe to a fast V-shaped recovery[1] of economic activity.

Among the positive news of late, the extraordinarily strong May labor-market report stands out. The unemployment rate, against all odds and expectations, dropped down to 13.3% from the interim crisis high of 14.7%, reflecting approximately three million people returning to work. The reopening of many states probably helped. Besides the usual measurement error (the Bureau of Labor Statistic admits the underlying unemployment rate could be 3% higher) the job figures appear to have been boosted by design features of the generous Paycheck Protection Program (PPP).[2] This program foresees forgivable loans if certain criteria are met. Among them are keeping people on the payrolls "(…) or quickly rehiring employees and maintaining salary levels."[3] So, some of the seemingly splendid numbers may be due to temporary effects, rather than underlying economic momentum. Pointing in the same direction, average hourly earnings dropped by 1% in May, after growing by almost 5% in April. This might well reflect low income workers having been rehired to secure loan forgiveness.

Talking about PPP loans, there have been some revealing news reports lately, about some business owners feeling confused by complicated forgiveness terms while others are realizing that their business model does not allow them to reopen anytime soon.[4] These reports are consistent with what recent statistics show: after a strong start in April, demand for PPP loans stalled; in the second half of May, it even appears that businesses returned more funds to the scheme then they withdrew (Chart 1).[5] This led to the implementation of the PPP Flexibility Act by the end of May to fix the problem. But until now the tweaks have failed to reanimate demand for loans. This should at least cast some doubts over any further boosts the program can provide to labor markets in coming months.

Chart 1: Amount left in the PPP – demand faded in May, with some of the funds even being returned 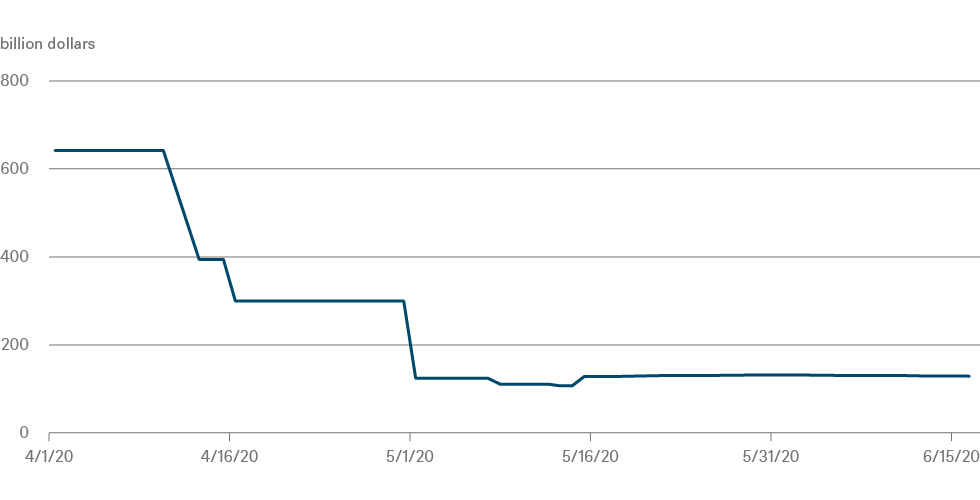 Sources: Small Business Administration and Haver Analytics as of 6/18/20

The same might be true of generous government support schemes directly benefitting households. These included temporary boosts to unemployment benefits, as well as the so-called stimulus checks of typically 1,200 dollars per adult. The checks are officially called Economic Impact Payments or recovery rebates, and have been structured in such a way that households can basically keep the money in full, no matter what happens to their 2020 income.[6] Recent income statistics (Chart 2) impressively visualize the effects of all this government largesse: the loss of income from wages and salaries has been more than made up for by recovery rebates and unemployment benefits. And with close to no opportunities and little willingness to spend money, households started to save more – the savings rate jumped to over 30% of disposable income in April. Sources: U.S. Bureau of Economic Analysis and Haver Analytics as of 6/17/20

However, these hopeful findings come with a few caveats. First, almost 90% of the recovery rebates have been distributed by now. From now onward, it is safe to assume households will use the money to cover their costs of living, or for shopping as we see later. Second, the increased unemployment benefits are about to run out in July. Like the PPP, current legislation only provides a short-term bridge, meaning unemployment benefits could soon become much stingier.

With respect to household behavior, it is fully understandable that as soon as lockdown measures are lifted somewhat, at least some people, less fearful about the virus, will likely feel the need to head outside and to get some sense of normality back. And so the consumer did: May's retail-sales report exceeded the wildest expectations. But this second spectacular bit of good news was short lived. May's industrial production report kicked sentiment back to reality. No rebound there, rather a stabilization at low levels (Chart 3). And we believe this is how this crisis should be seen. Unlike other downturns, this recession started with the consumer being suddenly pulled to the sidelines. The initial shock now crawls its way through to the supply side. And it might take some time before it is fully absorbed, especially if further shocks were to arrive in the meantime. 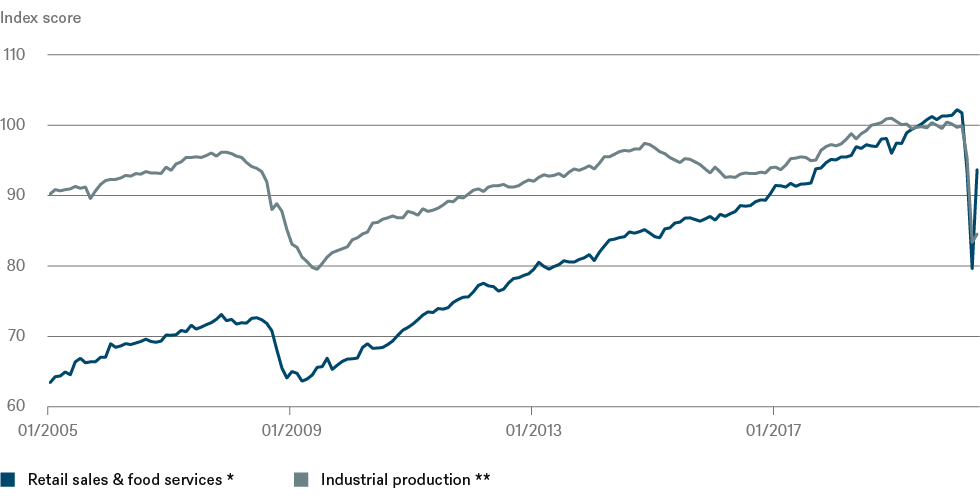 With so much seemingly good news it is all too easy to lose sight of what is really important: the course of the pandemic. Following the lifting of lockdowns and the halfhearted embrace of social-distancing measures the rate of new infections bottomed out and started to increase again in some states, initially almost unnoticed. This is something we had expected. But good news here as well. People learn to protect themselves and precautions have been taken. Therefore, we do not expect the pandemic to slip fully out of control again. Rather we expect a prolonged dynamic development that might require selective and regionally limited shutdowns of economic activity. Such smaller shocks, somewhat higher in frequency but lower in magnitude, might determine the pace of the recovery. As we outlined in our last U.S. economic outlook, we expect the U.S. economy to catch up with pre-crisis levels at the beginning of 2022.

A similar pattern was presented by the U.S. Federal Reserve (Fed) in their updated Summary of Economic Projections for the June meeting. We learned that a recovery, reflected in unemployment rate forecasts, is judged to take until 2022 while inflation is judged to remain below the 2% target over the whole forecast horizon. This gives confidence that the Fed will continue to support the economic recovery with all its tools, keeping rates low and providing liquidity through various buying programs with a keen eye on financial conditions. Later, at a testimony before Congress, Powell reiterated his plea for more fiscal stimulus looking ahead. We support this idea.

All in all, the positive surprises in economic data have reinforced our confidence that the rescue packages can actually deliver what they have been designed to do: substitute for lost economic activity and support the nascent recovery. And while monetary policy is basically at its maximum, what is left is another round of fiscal support. Most preferably more targeted at this phase of the recovery, aiming at households and small businesses without destroying economic incentives. This could prove more effective than just sending out checks or subsidizing industries which, if they were in good shape before the crisis, can always reach out to the Fed for funding. We believe that such a strategy would strengthen consumption while giving the people a chance to prepare for the post-Covid world instead of simply putting them back to work in a potential inefficient or even dangerous environment. A wise political strategy in our opinion, would also target the reduction of inequality and support state and local governments along those lines. We are always happy to see positive surprises these days.

1. A V-shaped recovery takes place when an economy suffers a sharp decline with an equally strong rebound.

6. The recovery rebates are technically a new refundable tax credit for taxpayers' 2020 taxes. Basically, they are one-off, non-refundable payments from the government to households, delivered through the Internal Revenue Service (IRS), because there was no other obvious way to issue transfer payments to all eligible households. Also, U.S. tax authorities only sent out checks to individuals for whom they had no bank account information. If they did have bank details, they simply paid the stimulus money directly into individual checking accounts. For a simple overview of the scheme, see: https://www.forbes.com/sites/advisor/2020/04/06/dont-worry-the-1200-stimulus-payment-wont-cut-into-your-tax-refund-next-april/ And on the reasons why there are so many different terms floating around, see: https://www.taxpolicycenter.org/taxvox/what-should-we-call-those-covid-19-recovery-rebates

New businesses have been mushrooming in the United States since the start of the pandemic. That could have big implications.
Jul 28, 2021 Commodities

Living beyond our means

There are several ways to express that humans are living way beyond Earth's means. The bill has arrived and will keep on coming.
See all articles

All opinions and claims are based upon data on 6/18/20 and may not come to pass. This information is subject to change at any time, based upon economic, market and other considerations and should not be construed as a recommendation. Past performance is not indicative of future returns. Forecasts are not a reliable indicator of future performance. Forecasts are based on assumptions, estimates, opinions and hypothetical models that may prove to be incorrect. Source: DWS Investment GmbH.