Head of Commodities and Portfolio Manager

Oil is now stabilizing at a little above 70 U.S. dollars per barrel as OPEC has reached a deal backed by all member nations and Russia (OPEC+). It allows OPEC and Russia to raise production in August by 400,000 barrels per day. The increase is planned to continue until the end of the year, and would result in a two-million-barrels-per-day rise in output relative to today by year-end. The announcement also includes an extension of the deal beyond its current expiry date of April 2022. The extension allows for higher production levels by the United Arab Emirates, Iraq, Saudi Arabia, Kuwait and Russia, which has significantly reduced the risk of a disorderly resumption of much higher OPEC+ production and in our view also limits the near-term price upside that would have followed a further delay in increasing production.

The agreement provides the market with more stability in the oil price by reducing the possibility of both near-term under-production and medium-term over-production. It also provides a form of “forward guidance” not seen in the July agreement. We view this as being conducive to a stable oil price for the next 12 months. However, the drama may be far from over. The extension agreement is not binding and there are likely to be further renegotiations by member states in 2022. Meanwhile, the U.S. rig count is continuing to show a small increase at the moment. The market will be focused on any change in capex spending plans in upcoming quarterly reports to see if production is likely to increase outside OPEC and Russia.

In base metals market fundamentals remain supportive but hawkish rhetoric from the Chinese authorities has derailed their rally for the time being. China remains committed to trying to cap the prices of the industrial-metals complex. Demand, however, continues to be strong as manufacturing and consumption recover, particularly outside China.

In June, Russia announced duties of at least 15% on commodities such as aluminum, steel, nickel and copper from August until the end of 2021 – with differing rates – to control domestic price inflation. The tax could affect almost 10% of global aluminum supply by reducing Russian producers’ willingness to export materials to a global market that is already dealing with tight supply-and-demand conditions. Iron-ore prices, too, might remain elevated as demand remains robust and supply limited. Chinese steel demand – for now – continues to be strong. We expect the current high prices to fade gradually as supply improves.

For precious metals, in particular, gold, we see a less rosy picture. In the longer term, gold prices could come under pressure as improving macroeconomic conditions make extraordinary monetary policy less justified, resulting eventually in tapering of asset purchases by central banks and increases in interest rates. Without a change to the global macroeconomic trajectory we expect gold prices to remain mostly subdued. We do not anticipate a return to previous highs unless inflation or currency conditions change materially.

The U.S. Department of Agriculture’s WASDE[1] report on July 12 was uneventful, showing minimal changes to the corn and soybean estimates. Brazil’s corn production continues to be incrementally lowered as the harvest suffers some difficulties. Meanwhile, grain demand estimates were left relatively intact. Wheat provided the only surprise in the report, with U.S. production lowered more than expected in response to drought in the high plains. Globally, however, production is balanced and therefore we have not seen a significant price impact.

Coffee-lovers, however, might have to prepare for higher prices. Brazil experienced the worst frost for two decades, destroying not only some crops but also young trees that usually take three years to produce a harvest.

All in all, weather remains the primary market driver within agriculture and the forecasts are, at present, relatively favorable. But with most of the growing season still ahead and inventories limited, prices may be very sensitive to small changes in production. 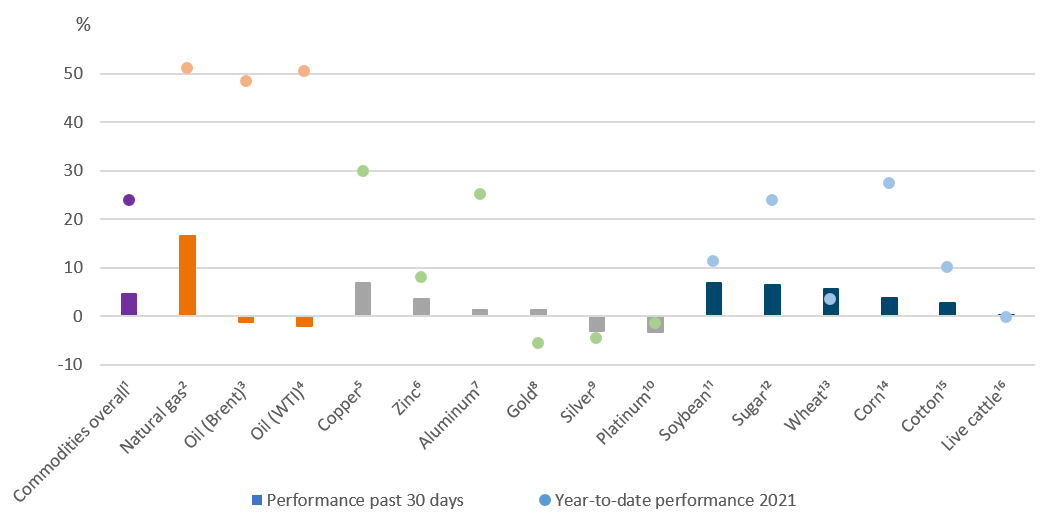 Past performance is not indicative of future returns.
Sources: Bloomberg Finance L.P. and DWS Investment Management Americas Inc. as of 7/26/21

Comparing the current situation to the oil shocks of the 1970s suggests that these are very different phenomena.
Sep 14, 2021 Macro

What could the parties' election programs mean for future fiscal policy?

Bring on the goods' inflation

Prices of goods have recently risen faster than those of services, for the first time in 25 years. We think this special Covid trend will turn around again soon. A pity, actually.
See all articles