In global stock markets, July was a pretty quiet month. For equities, the S&P 500 set the pace as usual. It gained a robust 7% in the month – a steady performance more reminiscent of the long bull market of the 2010s, rather than the wild swings during the Covid-19 pandemic of 2020. Various technical measures of investor sentiment improved markedly, notably the advancing and declining volume on the New York Stock Exchange, and the ratio of bullish versus bearish bets on U.S. stocks in derivatives markets.[1] For now, though, these do not yet suggest an immediate danger of a reversal in sentiment.

Investors seeking out excitement had to look elsewhere. U.S. high yield bonds notched up a return of almost 5%, the best performance in almost nine years.[2] The dollar, meanwhile, recorded its worst month since 2010, declining 4% in July against six major peers.[3] This mainly reflected concerns over the pandemic in the United States being far from contained.

Covid-19 and its direct and indirect effects look set to remain a crucial theme in the weeks ahead. With the benefit of hindsight, it is increasingly clear that the lockdown ended too early in many U.S. states. As a result, the first pandemic wave continues to sweep through the country, reaching a growing number of rural regions in Middle America. This risks further eroding President Trump's standing in opinion polling, dampening his reelection prospects.[4]

So far, continental Europe has done a better job at containing the pandemic. Also helping the euro, especially against the dollar, EU leaders agreed to a 750 billion euros pandemic emergency response in July, with supranational debt issued by the European Commission. Quite a few details may still need to be hammered out, however, to secure necessary approvals notably by the European Parliament. Both the European Parliament and some member states may well insist on more robust rule-of-law mechanisms, making access to recovery aid conditional respecting press freedoms in countries such as Hungary and Poland, for example.[5]

Meanwhile, new case clusters are already emerging in several European countries, suggesting the scope for further waves of infections after the end of the summer holidays. If so, there are plenty of open questions. How quickly would another period of hidden community transmission and early signs of exponential growth be detected? How would policymakers react? Could we again see severe measures such as curfews, quarantine and prohibitions on (large) groups of non-household members gathering (esp. indoors)? And even if not, might citizens simply decide to avoid restaurants, theatres, shops, and offices at their own volition.

Answering any of these questions for a particular country is hard enough. Doing so for all of Europe is next to impossible. Two lessons, when looking at the experience in the rest of the world, stand out however. First, policymakers in rich countries will most likely opt for mandatory restrictions in the face of renewed waves, irrespective of the economic costs. Politically, quick responders seem to have done better, both in containing the pandemic and in maintaining their popularity. The longer policymakers hesitate, the bigger the need for severe and large-scale measures.

Sadly, this has not been an option for many of the poorer parts of the world. Covid-19 continues to ravage Latin America, has accelerated in India and appears to be spreading in sub-Saharan Africa.

So far, this summer has been marked by further increases in investors' risk appetite, boosted by tentative signs of an economic recovery, strong fiscal responses and supportive central-bank policy. However, investor's faith in the recovery and further fiscal stimulus is already being tested in the United States, with a standoff in Congress resulting in the loss of unemployment top-up payments to tens of millions of Americans. Given that these are also voters and that elections are looming, we would expect an agreement to be reached eventually.

Still the market reaction is likely to be telling, both to the eventual outcome and any troubles along the way. For now, we have made no tactical changes in bonds. In the short term, we continue to expect U.S., European and emerging-market (EM) government bonds to trade sideways, except for Spain, where we see some scope for further gains from EU support measures, despite the recent flare-up in infections. Tactically, we also see some further upside for European corporate bonds across the risk spectrum, given supportive central-bank purchases. For U.S. corporate bonds, notably in the high-yield segment, we see some further momentum in the coming months, but are quite sceptical on a twelve-month horizon. Plenty of recovery hopes are priced in, and there is only so much even the most generous amount of central-bank measures can do to permanently prop up fading businesses.

That is also a concern for equity markets, where valuations have become stretched, especially in the United States renewed tensions with China are another risk, though perhaps more so for emerging, rather than developed markets. From a twelve-month horizon, a case can certainly be made for European and UK equities. For now, however, lackluster progress on a post-Brexit free trade deal is likely to deter any but the most determined bargain hunters.

Against this backdrop, we still have no clear regional preferences in equities on a tactical basis. However, in Europe we continue to prefer small caps over large caps, while the opposite remains true in the United States. At the sector level, technology and healthcare remain our favorites, while we remain sceptical on real estate and utilities.

Macro data has recently improved but still remains at levels well below before the crisis. With regard to asset valuations, equity risk premia have come down massively as earnings drops have been much more pronounced than falling bond yields. This could be interpreted as a rising risk factor, but as always, uncertainty cuts in both directions. For example, the vaccine pipeline may well prove more promising than seemed plausible a couple of month ago, raising the possibility of a return to normal, after the Covid-19 pandemic. While we think that a risk upgrade is too late, a further downgrade might be too early.

With regard to equities, we stick to our preference for developed markets over emerging markets. We continue to believe in tactical opportunities in the more cyclical and value-oriented Eurozone region. In addition, positive developments on the corona vaccine front might support cyclical pockets in particular. From a valuation perspective, the market is clearly focused on growth whereas value and cyclical areas are not expensively valued.

We remain cautious on government bonds, but we continue to like inflation-linked bonds structurally. This is mostly due to developed central banks fostering negative real yields via a more aggressive shift toward average inflation targeting. Another potentially positive feature of inflation-linked bonds is a positive correlation to risk. This is especially the case in the United States with the U.S. Federal Reserve (Fed) shifting their monetary policy focus from "stabilization to accommodation". We believe that gold also remains an important component of a diversified portfolio. 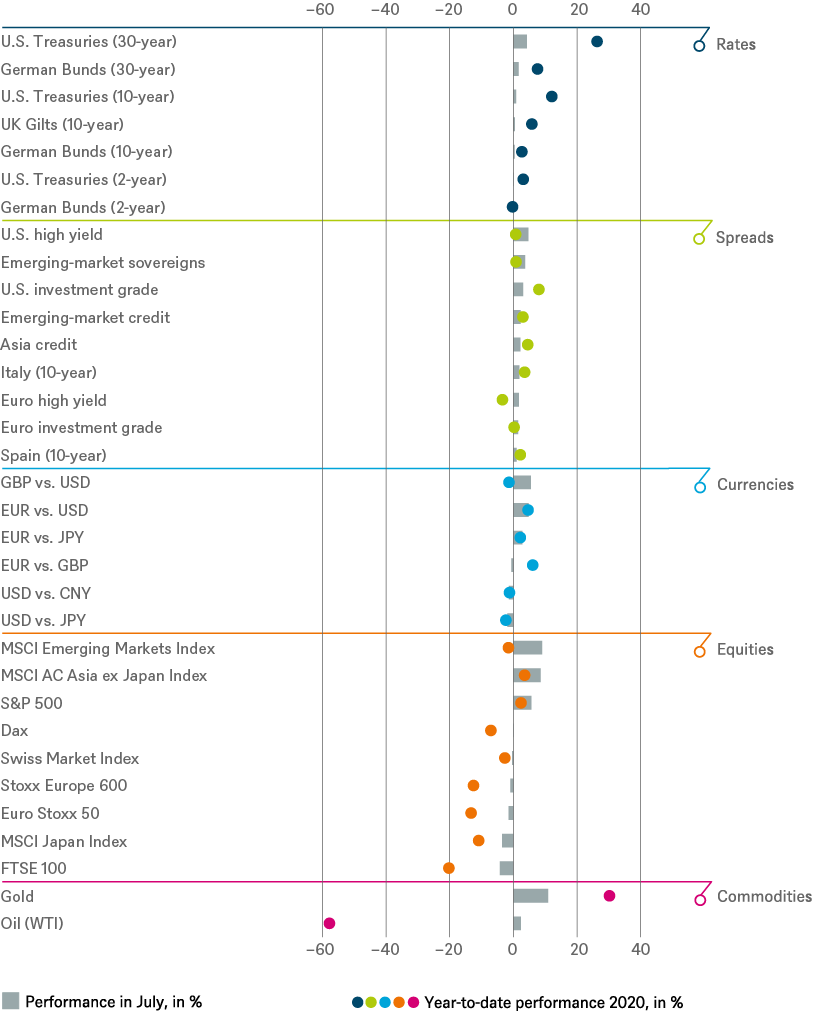 Past performance is not indicative of future returns.
Sources: Bloomberg Finance L.P., DWS Investment GmbH as of 7/31/20


Sources: Bloomberg Finance L.P., DWS Investment GmbH as of 8/3/20
Past performance is not indicative of future returns. Forecasts are based on assumptions, estimates, opinions and hypothetical models that may prove to be incorrect.

30. Relative
to the Bloomberg Commodity Index

Unlike in Europe, it is the cities and municipalities in the United States, and not the state, which are taking the lead in climate protection. They have good reason to do so.