Even by the standards of an already unusual year, November was impressive. Unlike March, probably the most dramatic month of the year, November surprised on the positive side from an investor's point of view. The much anticipated early-month high point was the U.S. election. The market came to terms with the result quite quickly. Hopes for a comprehensive stimulus program evaporated once it became clear that the Democrats would not achieve a landslide victory. At the same time, however, relief that there would be no comprehensive reversal of  President Trump's tax cuts in Washington’s probable new power constellation helped stabilize markets. Agitation by Donald Trump and other Republicans, suggesting that the elections had been compromised in several states won by the Democrats, appeared to trouble the markets little, with confidence in the legitimate conduct of future elections remaining firm.

What impressed the markets far more was the surprisingly good news from vaccine manufacturers. Three of them presented excellent test results in November. The efficacy of more than 90% was a positive surprise. Covid-19 vaccines are expected to be approved and distributed as soon as this year and the market now expects a large part of the population in many countries to be vaccinated in the first half of 2021. This might be why investors are tending to generously ignore the second wave of Covid-19 as well as the new lockdown measures accompanying it and even the weaker fourth-quarter growth expectations they have provoked.

With vaccines giving markets a big shot in the arm in November, equities as well as corporate and emerging-market (EM) bonds enjoyed a rapid ascent after a downcast October. With a gain of 13%, the MSCI World Index recorded the best monthly result in its history. As the month was characterized by rotation into cyclical value stocks, the technology-heavy U.S. and parts of Asia lagged behind the traditionally more cyclical markets. The Euro Stoxx 50 gained 18% and the CAC 40 as much as 20%, both of them also supported by the banking sector, which gained 30% across Europe. The Chinese CSI 300, on the other hand, rose by just under six percent, albeit after shining in October. [1]

Government bonds appeared somewhat disorientated at the beginning of the month and fluctuated widely, but ultimately 10-year U.S. Treasury and German Bund yields were at roughly the same level at the end of the month as at its beginning. Some remarkable asset-class movements in November included, in bonds, the first-ever plunge into negative territory for yields on 10-year Portuguese government bonds, and, on the commodities side, a jump in oil, with the Brent-crude price soaring by 27%. Gold’s recent weakness persisted, with a fall of 5.4%. And copper was strong, rising by 11.6%. While gold is weakening and the market overall shows a risk-on sentiment, Bitcoin was able to exceed its 2017 peak for the first time.[1]

DWS's quarterly strategy meeting took place a few days after the U.S. elections and the announcement of the first positive vaccine news. Accordingly, the outlook until the end of 2021 was quite positive. This was and is particularly the case as we expect investors to enjoy an exceptionally rare combination in the coming year: an economic recovery with strong earnings growth and central banks that will not increase interest rates. Growth and a low-interest-rate environment favor equities as well as corporate and emerging-market bonds. We also see opportunities in alternative investments.

Though we are confident about 2021, we see grounds for caution in the coming weeks. The markets have recently concentrated on the positive news and have regained valuations that suggest there is scope for a correction, given the near-term challenges: Stimulus packages on both sides of the Atlantic – in Europe predicted at 750 billion euros and in the U.S. between 0.5 and 2 trillion dollars – which many market participants described as vital just a few weeks ago, have stalled. Brexit haggling goes on, meanwhile time is running short – despite the seeming willingness on both sides to get a deal done. The mass distribution of vaccines could also prove a problem. Last but not least, there is the threat of further economic slowdowns at the turn of the year if the virus punishes the world for large holiday gatherings.

With the positive turnaround at the beginning of November, the riskier segments of the bond market have become more interesting again. We have therefore upgraded our ratings for emerging markets, both government and corporate bonds. Asian bonds as well as U.S. investment-grade (IG) and euro high-yield (HY) bonds were also all upgraded to positive. We expect government-bond yields to move in a narrow band in the coming months.

As a result of the improved economic outlook and ongoing sector rotation, we recently upgraded utilities to neutral and downgraded healthcare stocks (based on downgrades of the pharmaceutical and biotechnology subsectors) to neutral. We believe some utility stocks should benefit strongly from the large number of new "green deals" around the globe. The healthcare sector, on the other hand, is likely to continue to struggle. It is a defensive sector in a risk-on market and has been lagging behind for months despite the good vaccine news. Regionally, emerging markets have become our favorite. They are benefiting from a weaker dollar, stable commodity prices, low U.S. interest rates and the generally improved economic environment. Many of them have also coped well with the pandemic – and without placing too great a burden on their national budgets. However, we expect strong divergence within the emerging markets. China outperformed in 2020. We believe the other regions should catch up in 2021.

We do not have strong preferences among developed countries. Europe and Japan should continue to benefit from the rotation into cyclical value stocks, while growth stocks, and thus ultimately large parts of the U.S. market, could regain strength in the course of the year.

Our price targets are based on more generous valuation parameters. For example, in order to reach 3,800 index points for the S&P 500 by the end of 2021, we now use a target price-to-earnings (P/E) ratio of 22 on past earnings (in this case 2021), which is ambitious from a historical perspective. However, we believe that an environment in which interest rates are likely to remain low for some time justifies a reduction in the risk premium, and thus an increase in the P/E ratio.

Real estate, too, is benefiting from the low-interest-rate environment. In the longer term, we are looking in particular at the logistics sector and at residential real estate on the outskirts of attractive cities. By the end of 2021, we expect WTI oil to be priced at $49 per barrel, with a relatively narrow trading range overall in the course of the year. For gold, we expect a long-term price of $2,100 an ounce, but see potential for further weakness as this year ends.

We maintain our slight risk preference but think that the markets have become more vulnerable to corrections after their strong run in November.

The repositioning of equities away from growth stocks and towards cyclical stocks over the previous months has paid off, but we are entering 2021 with a more balanced positioning. In regional terms, our view of the UK has brightened for relative-valuation reasons, while we take a more positive view of Japan from an economic perspective. This means that overall we no longer have any strong regional preferences.

We continue to be skeptical about government bonds from core Europe and the U.S. due to the further improvement in the economy. We believe rising government debt could also drive yields higher, although central-bank purchases, private demand for bonds and continuing low inflation are a counterweight. U.S. government bonds look more attractive to European investors than their domestic counterparts and should offer some stability in the event of market turbulence. We take a more positive view of UK Gilts, as they have already priced in very negative developments. For corporate bonds there is still a lot to be said, although their valuation is slowly becoming a problem, so we believe they should no longer be so dominant from a portfolio perspective. We prefer high-yield to investment-grade bonds and European securities to American ones. We also prefer the high-yield segment in the emerging markets compared to investment grade.

Our more cautious short-term view of the dollar has proven its worth, as it has recently weakened significantly. The extent to which the dollar will continue to behave in the coming months as it has in the year to date – strengthening when risk aversion increases – remains to be seen. The same applies to the Japanese yen. 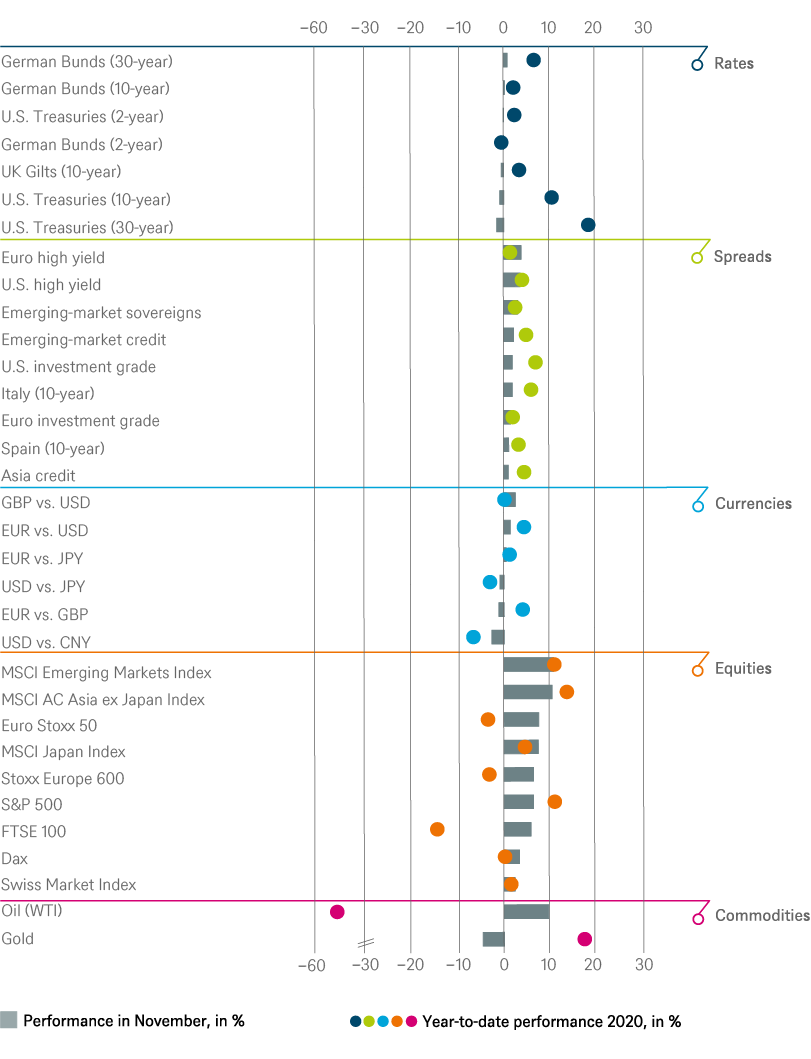 Past performance is not indicative of future returns.
Sources: Bloomberg Finance L.P., DWS Investment GmbH as of 11/30/20


Sources: Bloomberg Finance L.P., DWS Investment GmbH as of 11/30/20
Past performance is not indicative of future returns. Forecasts are based on assumptions, estimates, opinions and hypothetical models that may prove to be incorrect.

The likelihood of further deficit spending has risen sharply due to the outcome of the Georgia Senate elections.
Jan 13, 2021 Multi Asset

With broad diversification across different asset classes, multi-asset funds can turn out to be yielding portfolio building blocks -- even in difficult market phases.
Jan 12, 2021 Equities