How would investors have positioned themselves if they had correctly foreseen the course of the Covid-19 pandemic twelve months ago? Global equities (MSCI AC World Index) had already fallen by 14% in February 2020. In March, they fell by a further 24%, before the subsequent recovery enabled prices to rise by a full 30% over a twelve-month period. Even compared to the record high of mid-February 2020, shares have gained 13% to date, with the Nasdaq 100 leaping by 31%.

Would investors who were, somehow, pandemic-experienced and wise have expected such price levels? And that, despite numerous economic and social lockdowns due to second, third or fourth waves of contagion, depending on the country? Of course not. And since vaccines historically have taken a decade to develop, they would not have predicted the ultra-swift development of several highly effective vaccines either. Meanwhile, the quite extraordinary level of aid from governments and central banks has also been unprecedented, except in wartime. And it is the hyperactive policymakers which remained the most important market players in February, though they were perhaps, this time, not as effective as they would have liked.

The leaders of both the U.S. Federal Reserve (Fed) and the European Central Bank (ECB) did not miss an opportunity to emphasize that they were not at all worried about inflation and that they saw no reason whatsoever to deviate from the course of low interest rates and massive bond purchases. But investors did not seem to want to hear the message. Perhaps the central banks did not paint the economic environment as negatively as the size of their aid packages seemed to suggest. Or investors themselves were starting to paint a more optimistic picture. When the ECB chief Christine Lagarde said at the end of February that the development of government-bond yields was being closely monitored it suggested that the bank remained ultra-dovish. Which raises the question what would the ECB do in case markets were really crashing, or if industry was really not getting off the ground due to difficult "financial conditions"? Because it already has underlined its willingness to intervene just because Bund yields had risen from minus 0.5% to minus 0.25% within a few weeks and in an environment of near-record high stock-market indices and a real GDP growth rate of 4.6% in the Eurozone forecast for the fourth quarter of 2021.‌[1]

The rise in government-bond yields is indeed notable and important. In February 10-year U.S. Treasuries continued a rise that has been ongoing since August 2020 and accelerated significantly in February. While they gained only 15 basis points to 1.05% in January, they peaked at 1.62% in February before ending the month at 1.40%. The surprising thing here was that the rise in yields was no longer due to rising inflation expectations but to the increase in the real component. But actual inflation, too, was rising in much of the world in February. Equity investors, however, appeared to remain relaxed about this rise in yields, at least in the first two weeks of the month, when the MSCI AC World Index rose by 6.6%, before things went in the other direction. But still, in the month as a whole, the index managed a slight gain. Europe did particularly well, thanks in part to the periphery (except for Portugal), as did Japan and the United States, although technology stocks weakened, with the Nasdaq 100 down slightly. Due to improving growth expectations and rising interest rates, cyclicals did particularly well, including Europe's banks, up 15%, while utilities, healthcare and (non-cyclical) consumer discretionary ended in the red. Cyclical recovery hopes were also reflected in commodities. After a strong previous month, copper and oil made further gains. Oil has already risen by more than a quarter over the course of the year, and the MSCI AC Energy Index was the strongest equity sector globally, gaining 15.5%. Slightly rising real interest rates, declining inflation expectations and a brightening economic picture did not go down well with gold – it lost almost 10% in February. Cryptocurrencies, however, once again climbed to new record highs, though in the final week of the month they suffered from vertigo and fell considerably.

Countries do not want to let their deficits get completely out of hand. But for now markets will likely focus on further interest-rate developments and the pace of the economic recovery.

Before moving on to the tactical outlook for the individual asset classes, we would like to mention a few developments from February that perhaps received less attention than they deserved. Though globally disparate, they may point to what may be a new trend. There are (at the time of writing only rumored) increases likely in at least corporate but perhaps also personal income tax in the UK. America's largest retailer may increase its minimum wage, and there is a political debate in the United States about its nationwide introduction. In China's Special Administrative Region, Hong Kong, meanwhile, the talk is of the possible introduction of a stock-exchange transaction tax. But there is also a rather blunt message from the United States that it regards China as a strategic adversary whose technological progress it wants to prevent for as long as possible. Finally, there is the disaster in electricity and gas supply in America's most liberal state (concerning this part of public infrastructure), Texas, which was triggered by the weather but facilitated by long-term underinvestment. This experience could lead to a rethinking of infrastructure spending and deregulation in the United States. All of these items of news suggest that some limits may in future be placed on the further expansion of corporate profit margins. Countries do not want to let their deficits get completely out of hand. But for now markets will likely focus on further interest-rate developments and the pace of the economic recovery.

We remain convinced that the inflation spikes this year will be temporary and that bond yields will remain low in the medium term. However, this does not rule out that bond yields may maintain their upward momentum in the weeks to come. Central banks will have to walk a tight line in the coming weeks, signaling to the market that they have not lost confidence in the recovery, but at the same time indicating that for the time being there are still individual parameters (such as the labor market in the United States, and the ominous "financial conditions" in Europe) that would justify further intervention. Even though we cannot rule out a further overshooting of U.S. government bond yields in particular, we are once again neutral in all maturities. We are also now neutral on all Bunds, as well as on Italian government bonds, where we assume that the Draghi honeymoon effect has worn off.

We have left corporate bonds at positive across the board, even though we believe there is little potential for further spread tightening versus government bonds. We have kept only euro high-yield bonds on neutral, as the spread tightening here is already so advanced that it leaves no room for disappointment (especially in the form of payment difficulties on the part of individual issuers).

On the currency side, we see further upside potential for the dollar against the euro.

We expect that, as was already the case at the end of February, rapid spikes in bond yields in particular are likely to make equity investors nervous – especially if this manifests itself via real yields rather than inflation expectations. The victims of such spurts are the classic defensive sectors such as utilities, healthcare and non-cyclical consumption, but also growth stocks, above all if they are still loss-making today. We are not making any tactical changes in equities and continue to pursue the barbell strategy focusing on technology stocks and selected cyclical stocks. Even though Europe, especially Germany, should benefit particularly from an improving global economy, many stocks in the Dax are struggling with individual problems. We therefore prefer small- and mid-cap stocks.

Despite the sharp rise in oil prices last week, we think there is further upside potential. Raising this potential should also be in the interests of Saudi Arabia, which has shown itself to be the most flexible supplier in recent months, willing to adjust its output to demand and prices at any time. However, if some of the other suppliers were to increase their production more strongly in the run-up to a firmer economic recovery, this could generate downward price pressure again in the short term. In metals, we still see the risk that a slowdown in the Chinese investment rate could hurt industrial-metal prices in the short term. In the medium term, however, we believe industrial metals should continue to outperform precious metals.

The main backdrop has not changed significantly in recent weeks. We maintain a slight preference for risk and remain cautious on government bonds, especially those with medium to long-term maturities. However, due to high valuations in our favorite asset classes, equities and corporate bonds, hedging might now be worth considering, especially given investor nervousness triggered by the jumps in inflation and yields.

Although we currently do not favor them, government bonds remain an indispensable part of balanced portfolios. We prefer U.S. Treasuries to Bunds, as we believe the (increased) yield advantage can currently be hedged quite cheaply against currency fluctuations. From a multi-asset perspective, we prefer euro high-yield bonds and emerging-market high-yield bonds in hard currency to investment grade and U.S. high-yield bonds.

In equities, our favorite regions remain emerging markets, the United States and Switzerland. We now have a mild dislike for UK equities and a mild preference for the Eurozone. From a sector perspective, we focus on the two investment styles growth/quality on the one hand and cyclicals/value on the other. While gradual, inflation-driven increases in bond yields tend to be positive for equities and rising real interest rates a disadvantage. Despite the recent rise in rates, we still feel comfortable here, especially as U.S. real yields remain negative. 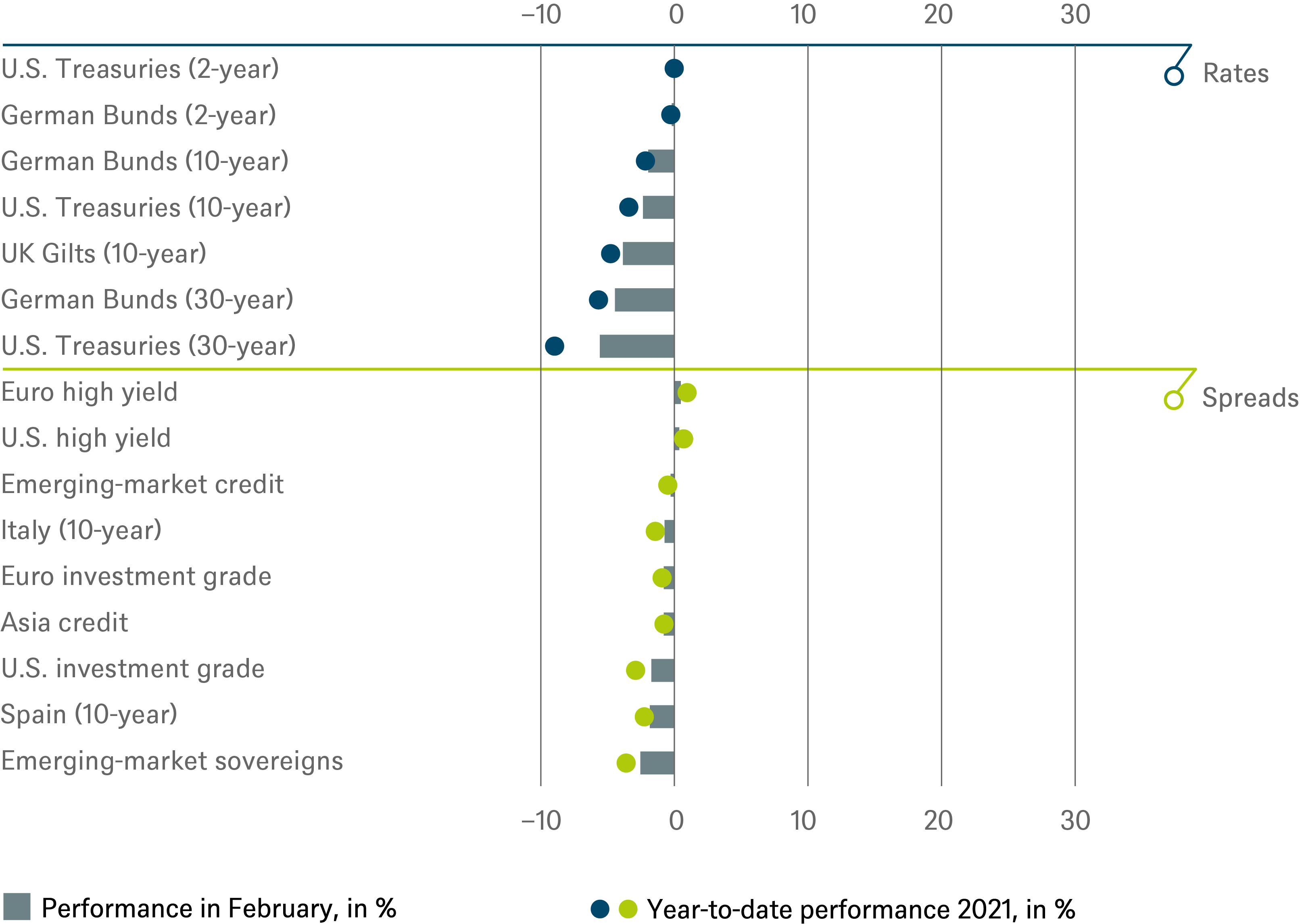 Past performance is not indicative of future returns.
Sources: Bloomberg Finance L.P., DWS Investment GmbH as of 2/28/21 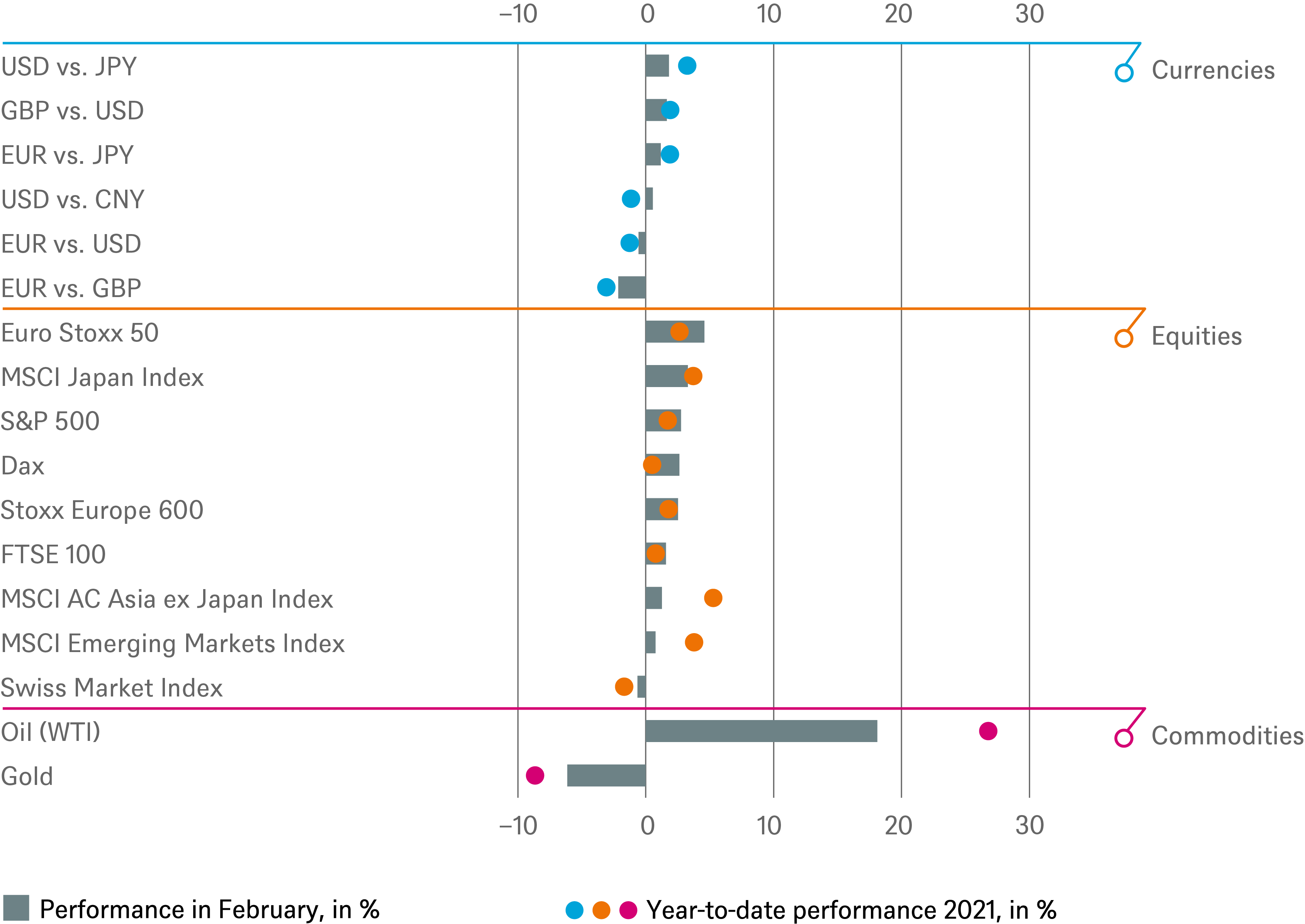 The relationship between the spot price for oil and bond-market expectations for long-term inflation rates has become tighter than ever.
Oct 20, 2021 Europe

1. According to Bloomberg Finance L.P., year-over-year

26. Relative
to the Bloomberg Commodity Index