"Sell in May and go away." This stock-market proverb was particularly in vogue this year. Those who heeded it could observe market events with a certain satisfaction – until May 13. At that point the MSCI AC World Index was down by more than 2% since the beginning of the month. And previously hot market segments – such as SPACs[1]‌, FAANMGs[2]‌, semiconductors, clean energy and, of course, cryptocurrencies – had extended their losses from their recent highs, to over 20% in some cases. But the wisdom of proverb faltered during the remainder of the month.  Markets recovered and the MSCI AC World Index ultimately closed the month up by 1.6%.

Market volatility moved in the opposite direction to prices, rising sharply in the middle of the month before falling just as abruptly. Those who showed nerves of steel were rewarded with new highs for numerous stock indices. Cyclical sectors, such as Banks, Energy and Materials, which have already proven their worth for several months, drove the markets.

Regionally, emerging markets, particularly Latin America and Europe, led the way, while the United States was among the laggards. The S&P 500 managed a modest rise of 0.7% and the Nasdaq posted its first loss since October, falling by -1.4%. Cryptocurrency investors could only dream of such losses: some of the more prominent currencies lost about a third of their value. Skeptical noises from official bodies in China, the United States and Europe contributed to the crypto carnage.

Owners of gold and silver had a far more enjoyable time, leading a commodities sector that was strong – except for agricultural commodities – with a gain of around 8%. In bonds, U.S. Treasury yields continued to tread water, while the negative yield on 10-year German Bunds shrunk to its lowest in a year, at -0.1% (and -0.075% on its best day), before moving lower again. The U.S. dollar, meanwhile, continued its now two-month slide against a broad basket of currencies.

With industrial metals, oil and gold rising, it is reasonable to assume that inflation was one of the market's worries in May.

With industrial metals, oil and gold rising, it is reasonable to assume that inflation was one of the market's worries in May. The worries were fueled above all by a nasty headline number from the United States: 4.2%, the year-on-year rise in consumer prices. The fact that central bankers around the world proclaimed "please move along, there's nothing to see" in unison, might not have helped. "Transitory" then became the buzzword, as central bankers and many others asserted that this inflation was a temporary phenomenon and would go away soon.

That is the fervent hope not only of the monetary watchdogs, but also of large sections of the capital markets, or the stock markets would hardly be trading where they are now. Whether the central bankers and the markets will be proved right remains to be seen. But there are several factors which suggest that inflation will calm down in 2022. Base effects, due to the extremely depressed energy prices a year ago, should fade. Problems in supply chains should themselves prove temporary, and so should the impact of some increases in minimum wages this year.

In addition, there was a pronounced car impact in May: the 21% increase in used car prices contributed 0.6 percentage points to the overall CPI rise of 4.2% in the United States. Supply problems for new cars due to a lack of semiconductors were a factor.

In any event, inflation, which is so much the current focus of concern, can hardly be described as an overlooked risk. And yet predicting inflation rates for 2022 and 2023, after the economic rollercoaster of the past year, with the biggest downturn and upturn in many decades, is certainly a big challenge for economists. There may be more market dramas to come.

The overall effect in markets has been a sharp rise in the valuations of many assets, reducing the risk buffer for possible disappointments and setbacks.

As part of the quarterly review of our investment strategy our 12-month forecasts have largely been adjusted only slightly upward. This means that in our view, the return potential is modest across the board and, in the case of government bonds, non-existent.

We are cautious too in the near term. Buoyed by an overall robust start to the year for most economies and, even more so, companies, which resulted in unusually strong full-year earnings revisions, markets have made a strong start. European and American equity markets are up by double digits, and corporate bonds have also continued their upward trajectory. Confidence in an improving economy is also reflected in the sharp rise in commodity prices. The overall effect in markets has been a sharp rise in the valuations of many assets, reducing the risk buffer for possible disappointments and setbacks.

The further normalization of economic activity post-Covid provides a positive foundation for the coming months. But this normalization also poses a risk to the markets, given that the first few months of this year saw the greatest degree of improvement, especially compared with the previous year. Whether it be economic growth, vaccination progress, profit growth, fiscal aid packages or support from central banks, the peak of the momentum is likely to prove to have been in the first half of this year. This period may also be the peak of the inflation revival, at least in the United States. There is, however, an increasing risk that the central banks will say something at their upcoming meetings that the markets do not want to hear.

In general, the road to the "new normal" is likely to be uneven. This also applies to the evolving relationship between the United States and China. So, there is much for investors to digest, and they should perhaps wait and see whether developments over the summer justify today's valuations. At the same time the potential for positive surprises, especially due to pent-up consumer spending, cannot be discounted either.

From a strategic perspective, little has changed in our forecasts. We expect a small increase in government-bond yields, while the narrowing of risk premiums for corporate bonds should now be largely complete. We favor high-yield bonds over those with investment-grade ratings, and bonds from Asia in preference to those from other regions. Inflation and QE tapering concerns are likely to create volatility. On the currency side, we have weakened our forecast for the U.S. dollar against the euro from 1.15 to 1.20 for the next 12 months.

From a tactical perspective, we have recently taken Italian government bonds back to neutral, as we fear that the initial euphoric "Draghi factor" has worn off somewhat, and that more alternatives are emerging as yields rise in Europe. Also due to this expected further rise in yields, we have moved 30-year German Bunds to negative. European high-yield bonds could see somewhat weaker months due to high issuance activity in the summer, which is why we are neutral on them.

Our strategic outlook for equities is no more than cautiously positive as we see the potential for returns as being low over the next 12 months. Ultimately, however, equities continue to benefit from two big factors: the lack of any good alternative and their ability to offer a certain degree of hedging against rising inflation.

Tactically, our preferences also remain largely unchanged. This means that we continue to focus on growth stocks, especially from the technology sector, but also on selected cyclical stocks that can benefit from the economic recovery.

Regionally, our preference for European small caps remains in place. However, we continue to see the most potential in Asia. Even though, or perhaps precisely because, this region has lagged this year, we now believe it can catch up. The valuation discount of around 35% to U.S. equities seems excessive to us. The region has come through the crisis relatively well, without significantly increasing its debt, as Western economies have done. We also like Asia's stock-market mix, with its prevalence of IT and consumer sectors.

May provided a good example of why there is a growing difference between the performance of a commodity and the corresponding corporate sector in the stock market. While commodities are benefiting from the pickup in economic demand, companies are having to cope with the need to implement sustainability initiatives. Companies' finances can be directly affected by these initiatives or share prices may be dampened by valuation discounts as institutional investors steer clear of the sector. In May, a European court imposed direct CO2 reduction requirements on one oil company, and in the United States climate activist funds succeeded in forcing representatives on to the boards of two oil multinationals. Meanwhile, U.S. shale oil producers are finding it increasingly difficult to raise money for new investments. All this could, in our view, lead to the OPEC+ cartel expanding its market share in the current upswing: OPEC can raise its production volumes more quickly.

For industrial metals, despite verbal interventions by the Chinese government, we expect price increases to reappear, as the further increase in demand meets a supply side that has underinvested for some time. 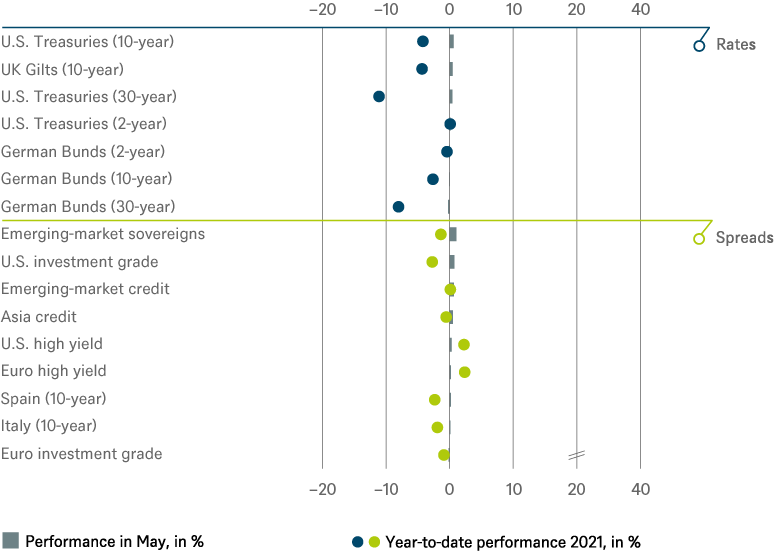 Past performance is not indicative of future returns.
Sources: Bloomberg Finance L.P. and DWS Investment GmbH as of 5/31/21 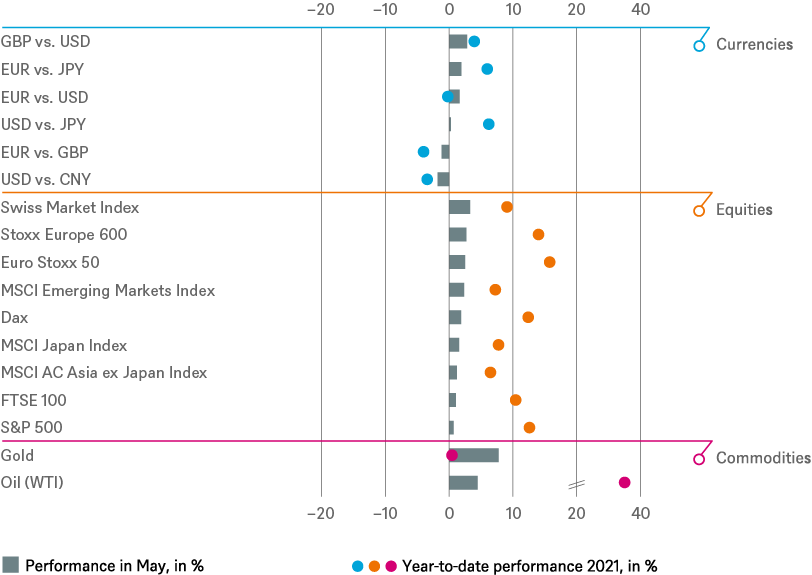 Bringing natural capital in from the cold

Why a credible global climate policy must have carbon-emission reduction and higher carbon prices but also land and sea protection and restoration at its heart.
Oct 14, 2021 Sustainability

ECB: Climate protection to be given a BIG boost

Will price hikes be the next S&P EPS leap?: Beware nitrous engine damage
See all articles
Share this page

27. Relative
to the Bloomberg Commodity Index