If you happen to have been away all of July, there are two things worth saying and one thing worth knowing. First of all, lucky you! Sitting in the sun somewhere and reading things mostly unrelated to the recent market movements was an excellent use of your time. Even if that somewhere happened to be your own garden or balcony, due to lingering Covid-19 travel restrictions or simply natural caution.

Second, however, do not be misled by a brief scan of how steady developed markets look by just considering where they started and ended the month. True enough, the S&P 500 was mostly back to its record-setting ways in the last days to July, taking its total gains in the year-to-date to about 18%. That put it a touch ahead of Europe's Stoxx 600, but not by much. Indeed, pretty much the only developed-market signals that might rouse mild curiosity on your part are the continuing declines in government-bond yields. On 10-year U.S. Treasuries, yields have fallen to about 1.25%, almost 50 basis points below their post-pandemic peak at the end of March. Meanwhile, the spread between 10-year and 2-year U.S. Treasuries flattened a bit further, to about 105 basis points. German Bunds showed a similar pattern.

That brings me to my third point. The thing worth knowing and remembering about July 2021. Not so long ago, inflation worries were all the rage. By contrast, current conventional wisdom is that there is not much to worry about in the slide in yields. It just confirms that most observers think both the U.S. Federal Reserve (Fed) and the European Central Bank (ECB) will be able steer the recovery toward a steady, post-pandemic future. They will likely provide enough support via low interest rates and asset purchases to prevent setbacks, but reduce it just in time to prevent inflationary pressures from getting out of hand.

Broadly, we continue to share that view. Recent macroeconomic readings, including gross-domestic-product (GDP) figures on both sides of the Atlantic paint a nuanced picture. That strengthens the case for central banks to be vigilantly patient, at least for now. We also think that yields may have risen too much, too quickly, early in the year and perhaps gone too far in the opposite direction more recently.

Still, this month's market analysis would be incomplete without mentioning some of the more worrying signs lately on our radar. It is not just that there was a period of market turbulence across various risky assets at the middle of the month. Nor that China has cracked down on private tutoring companies, after already taking a tougher line on its technology champions.[1]

"History doesn't repeat itself, but it does rhyme."

Instead, veteran market observers within our team see distinct echoes of an early period in recent market reactions. Specifically, one of my colleagues from the multi-asset team recently reminded me of a classic cover of The Economist from November 1997. The story described "A week on the wild side" in financial markets.[2] That summer, troubles had started to arise in East Asia, notably Thailand. The full-fallout of what came to be known as the emerging-market crisis of 1997/98 still lay in the future.

That week in November 1997 provided an interesting early illustration of various channels of transmission, including psychological ones. At the start of the cartoon, you see a wealthy punter, whispering into the phone "I got a stock here that could really excel." That gets translated via misunderstood whispers into "Sell", triggering a panic. Eventually, another punter cannot take it anymore and says his "Goodbye" to all the madness. Which in turn becomes a whispered "Buy" signal, causing a frenzy and leading the cycle to start all over again.

As the old aphorism typically attributed to Mark Twain has it, "History doesn’t repeat itself, but it does rhyme." Partly, that is due to human psychology.[3] Given all the uncertainties that currently abound, from the fast spreading Delta variant to political changes, it seems quite plausible we might occasionally be in for some similarly wild episodes in coming months.[4] Vigilant patience certainly seems like a good stance to take against such a backdrop. And, not just for central bankers, but for investors too.

For developed-market government bonds, we mostly stay tactically neutral. We think that U.S. GDP may either have already peaked during the second quarter, or soon approach that point, with slightly lower growth momentum ahead. Still, we expect solid demand, given that U.S. consumers saved a lot during the pandemic crisis. In Europe, the new ECB strategy with a symmetric inflation target and longer-term official ECB inflation projections still below 2% continue to point toward a scenario of interests staying "low for longer." Against this backdrop, we remain negative on 2-year German Bunds. For longer German maturities, we have moved to a neutral stance, not least as these are heavily influenced by other factors, such as the future evolution of U.S. Treasury yields. In the EU periphery, the Covid-Delta mutant and potential lockdowns in Europe should be monitored closely. For now, we remain overweight on Spain, but neutral on Italy.

Overall, we remain constructive on credit, with slight overweights for U.S. high yield, European high yield and European investment grade. In U.S. high yield, most deals coming to market are still just for refinancing and general corporate purposes. Among our preferred picks are bonds benefiting from the reopening story, for example from the leisure industry, as well as certain pockets in the commodity space, such as gas distribution. For European high yield, low primary market activity and low volatility in spreads over the summer provide additional reasons for our positive stance. Meanwhile, European investment grade should continue to benefit from ongoing low corporate credit supply in combination with the further cyclical recoveries of key European economies. That said, spreads are quite tight, partly due to the lack of alternatives from the sovereign space. For U.S. investment grade, we remain neutral for the time being, due to tight spreads and valuations.

In emerging markets, we continue to prefer high yield to investment grade. Among sovereigns, issuance is down recently and we have seen some weakness in Asia, partly driven by the Delta variant. That is also part of the reason why we moved Asia Credit back to neutral, having previously taken a positive stance. On the political side, we consider the recent protests in South-Africa and Tunisia as largely idiosyncratic stories, but remain vigilant in looking for broader patterns.

We largely stick to our strategy consisting of an overweight in information technology and a cyclical positioning in most of our subsector calls, such as positive stances on automotive, mining, commodity chemicals and oil majors. At the same time, we are cautious on most defensive sectors, such as European telecoms and real estate. Several cyclical sectors remain attractive to us at current levels and they should have a "second leg" in the second half of the year. This is because many consumers are exiting Covid richer than before which should result in a period of sustained spending on cars, travel, restaurants and luxury goods. In addition, we believe that business spending on digital and green transformation should remain on healthy levels, too. Some patience might, however, be required for this "second cyclical leg" to unfold, as investors are still judging the sustainability of high automotive margins, peak-earnings in U.S. banks (due to provision releases) and the potential for further earnings upgrades in the materials sector.

That said, a mixed macroeconomic backdrop prevents us from taking a more bullish tone on equities, at least for now. Peaks in GDP and earnings-per-share growth rates appear to be fast approaching, if they have not been reached already. On the recently unveiled bipartisan U.S. infrastructure proposal, the Congressional timetable and arithmetic look quite tight, leaving scope for temporary setbacks. At the same time, we expect that Democrats aim to introduce more spending later in the year, most likely during the Budget 2022 process via reconciliation. The financing could well include an increase the U.S. corporate tax rates toward 28%, resulting in a 7% hit to earnings and flat earnings per share in 2022, while the potential benefits would be spread over many years. Finally, we have moved to a neutral stance on emerging-market equities, having previously had a positive stance. Following their recent underperformance and the recent Chinese regulatory measures, a lot of damage has already been done. However, it is still too early to say that the worst is already behind us.

After a volatile month, oil prices ended July pretty much where they started. We expect continuing volatility, but with a slight upward drift reflecting the recovery in global demand and relatively disciplined supply. For base metals, we remain positive for similar reasons. We are neutral on gold, which has had a difficult year-to-date, despite rising concerns about inflation. More recently, fears about a slowdown in growth due to the spread of the Delta variant also failed to provide much of a boost. In the longer-term, however, we believe that gold remains a valuable hedge as part of a balanced portfolio. Strategically, we remain bullish on non-listed real-estate, partly due to the illiquidity premium such assets can offer. In times of high valuations and low interest rates, that is not to be sneezed at

3 / Past performance of major financial assets 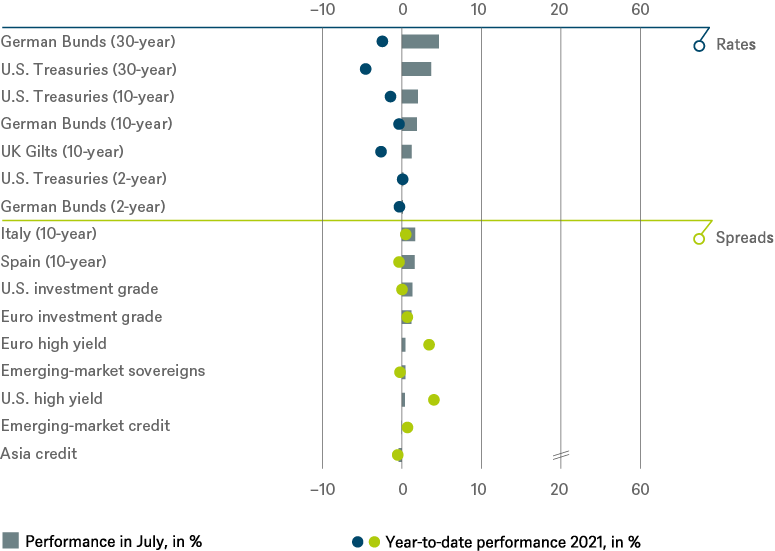 Past performance is not indicative of future returns.
Sources: Bloomberg Finance L.P. and DWS Investment GmbH as of 7/31/21 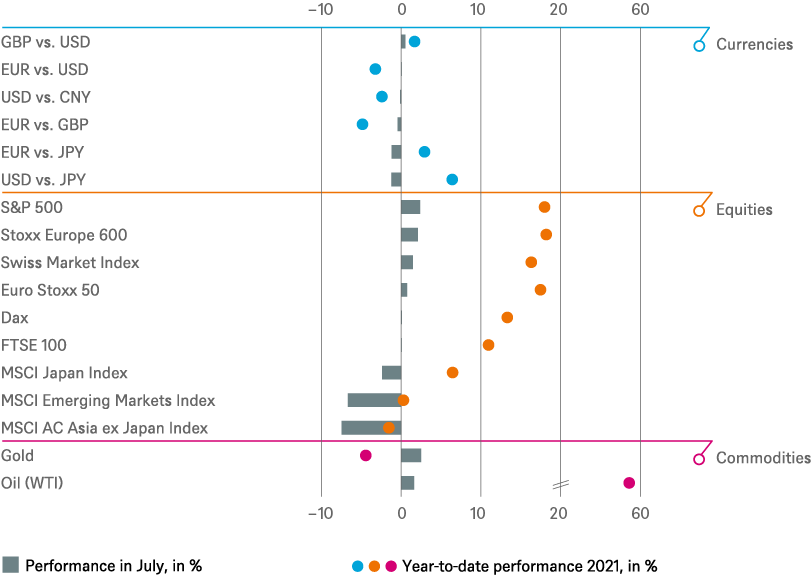 The relationship between the spot price for oil and bond-market expectations for long-term inflation rates has become tighter than ever.
Oct 20, 2021 Europe

3. For more on the subject if you are in need of some surprisingly entertaining beach reading in August, see Howard Marks (2018), Mastering the Market Cycle: Getting the Odds on Your Side, Houghton Mifflin Harcourt

4. As it happens, one of the more disturbing signs of what the post-pandemic future might hold has been the spread of protest movements across many middle-income countries. It is aptly described – where else – in The Economist: https://www.economist.com/international/2021/07/31/the-pandemic-has-exacerbated-existing-political-discontent

29. Relative
to the Bloomberg Commodity Index