In an opinion poll the year 2020 would certainly have little difficulty getting the worst approval rating since World War II overall. Most people in industrialized nations have seen their freedoms curtailed to an unprecedented extent and economic growth has fallen more sharply than at any time since 1946. But for many investors, the year belied its reputation. In the United States the tech-heavy Nasdaq, for example, rose by 45%. The extent of the gap between winners and losers, or between the real economy and the capital markets, can be well illustrated by three figures from the United States. The bad news was that unemployment rose last year from 3.5 to 6.7% and the poverty rate increased more rapidly than at any time since the index was introduced in 1960, from 9.3 to 11.7%.[1] Yet at the same time, the market value of U.S. stocks rose by just over seven trillion dollars – an increase of nearly 20%.[2] Nearly half of the absolute increase – that is, 3.4 trillion dollars – was accounted for by the ten largest publicly traded companies alone. And again, seven of those ten companies can be described as predominantly technology-driven.

We view this as an important narrative for the past year. Of course, the strong share-price gains initially seem hard to comprehend given the economic damage left by the ongoing pandemic. But there are good fundamental reasons why technology stocks dominated the stock market as both relative and absolute winners. The pandemic has driven the digitization of both the world of work and private life in a wide variety of ways. The profit figures of most major technology groups show that, in contrast to the dotcom bubble of the 1990s, "fantasy" is not being traded here, but predominantly "reality". This does not mean, of course, that all highly valued companies can live up to their current valuation in the long term.

The stock-market slump in the spring was very short by historical standards. The S&P 500 fell 35% in just 33 days. The pre-crisis high was reached again after only 142 more days. Thus, while the slump met the technical definition of a bear market (a 20% drop), it certainly did not feel like one. There were two main reasons for this. First, investors assumed early on that the economic downturn would be only temporary. And second, fiscal assistance and monetary support from central banks were quickly put in place in many countries. The central banks also emphasized toward the end of 2020 that interest-rate hikes could be all but ruled out for the coming years even if the economy continues to recover. This was an attractive scenario for investors: rising corporate profits coupled with very supportive central banks.

And the year-end was further sweetened for investors by three developments: the rapid arrival of effective vaccines, a market-friendly outcome to the U.S. elections and a reasonably soft Brexit. But the last-minute delivery of a Brexit deal could not prevent UK equities from being among the worst performing investments in 2020 – with a total return of minus 11.4%. On top of that, the pound weakened against the euro by more than 5%. Among the strongest stock markets outside the United States were those in Asia (including Japan), with the Dax also managing a small gain, while Europe as a whole remained slightly in the red, with the Stoxx Europe 600 index down by 1.4%. Banks played a large part in this, with the Euro Stoxx Banks sub-index down by 24%. Some emerging markets outside Asia, however, showed positive returns, but only in local rather than hard currency terms. Against the dollar, the Russian ruble lost about 16%, the Turkish lira 20% and the Brazilian real 23%. This was despite the fact that the dollar itself also weakened, falling by almost 7% against a basket of six OECD currencies. The really hard currencies – gold up by 25% and silver up by 48% – fared much better. But that was nothing to the hard-nosed speculators of the least tangible "currency", a cryptocurrency, which more than quadrupled thanks to a strong year-end spurt. Unlike with tech stocks, it is hard to provide any fundamental justification for that.

Unlike Brexit, which has now disappeared from the headlines, the 2020 U.S. election and its aftermath have continued to dominate the news in January. Of more importance to investors than Donald Trump's endless attempts to find Republican backing to prevent his ouster, were the elections in Georgia, where the two remaining seats in the Senate were up for grabs. If the preliminary results are confirmed and both seats have been won by the Democrats they could control the second chamber of Congress despite a numerical stalemate, thanks to the casting vote of Vice President Kamala Harris.[3] For most investors, that's certainly a complex proposition. The Democrats' greater ability to act could spur fiscal programs and especially larger stimulus checks to the public (2,000 dollars instead of 600 dollars). But it might also mean the Democrats have greater scope to raise taxes and tighten regulation. The acceleration of the increase in inflation expectations in the United States since early December and a steeper bond yield curve seem to indicate that investors have been expecting this outcome.[4] It could be slightly negative for U.S. equities in the medium term in our view, first because larger fiscal packages could reduce the level of support from the U.S. Federal Reserve (Fed), and second because tax hikes would have a direct impact on corporate earnings.

Aside from these political uncertainties, we believe the dominant influence on markets in the spring will likely be the pandemic. The race is on between vaccine distribution on the one hand and accelerated infection rates on the other as the more aggressive English mutation of the virus spreads. Renewed restrictions and the extension of lockdown measures could have a negative impact on first-quarter growth. But pioneers in the vaccination campaign, such as Israel, may soon achieve a significant slowdown in new cases, offering hope, too, to larger countries. Since we already presented our 2021 full-year forecasts in the last issue of Investment Traffic Lights, we will limit ourselves to short-term positioning in the following.

Our neutral view on U.S. government bonds, with a slightly cautious bias, has been confirmed by the Georgia election. Ten-year government bonds reached the one percent mark for the first time since March, driven solely by higher inflation expectations. In our view, the rise in yields should now lose momentum for the time being. We remain neutral on U.S. and core European government bonds, with the exception of ten-year Bunds, which we view more negatively. We are no longer positive on Italian government bonds as we believe their spread tightening versus Bund yields has little further potential. We have also moved euro high-yield bonds from positive to neutral as their marked rise might now be challenged in the first quarter by the worsening spread of the pandemic. On the currency side, we think dollar weakness against the renminbi may continue.

In equities, we have not made any changes within the country and sector weightings from a tactical perspective. Although we still see potential gains, we are now below consensus on price targets. We maintain our preference for growth stocks but have slightly increased the cyclical component. To reflect this regionally, our preference is Japanese rather than German stocks. For growth stocks from China, especially in the internet sector, we are keeping an eye on the government's increasing regulatory changes.

In our view the expected 2021 economic recovery is already largely reflected in prices. This argues for a reduction in the risk level in balanced portfolios. The positioning of professional investors is very optimistic but, at least from today's perspective, there seems little scope for positive surprises in the year ahead.

After the likely Democratic election victory in Georgia, yields may continue to rise for a while.[3] But at some point this should turn around, not least due to central-bank policy, and therefore make ten-year U.S. Treasuries, for example, more attractive again, and not only as a risk hedge. From a multi-asset perspective, we are now positive on emerging-market bonds, including local currency ones, as well as on European high-yield bonds.

We have made some regional changes in equities. The good run in Swiss equities is likely to tail off but we continue to focus on emerging markets, no longer predominantly on China and its neighbors, but more widely, including South America. In other respects, too, we believe that broader positioning in terms of growth and value stocks, blue chips and small caps, and also sectors is a good idea. However, we believe the combination of high valuations and optimistic positioning on the one hand and ongoing economic recovery and continued support from central banks on the other should keep prices in a relatively narrow band this year, at the index level, at least. 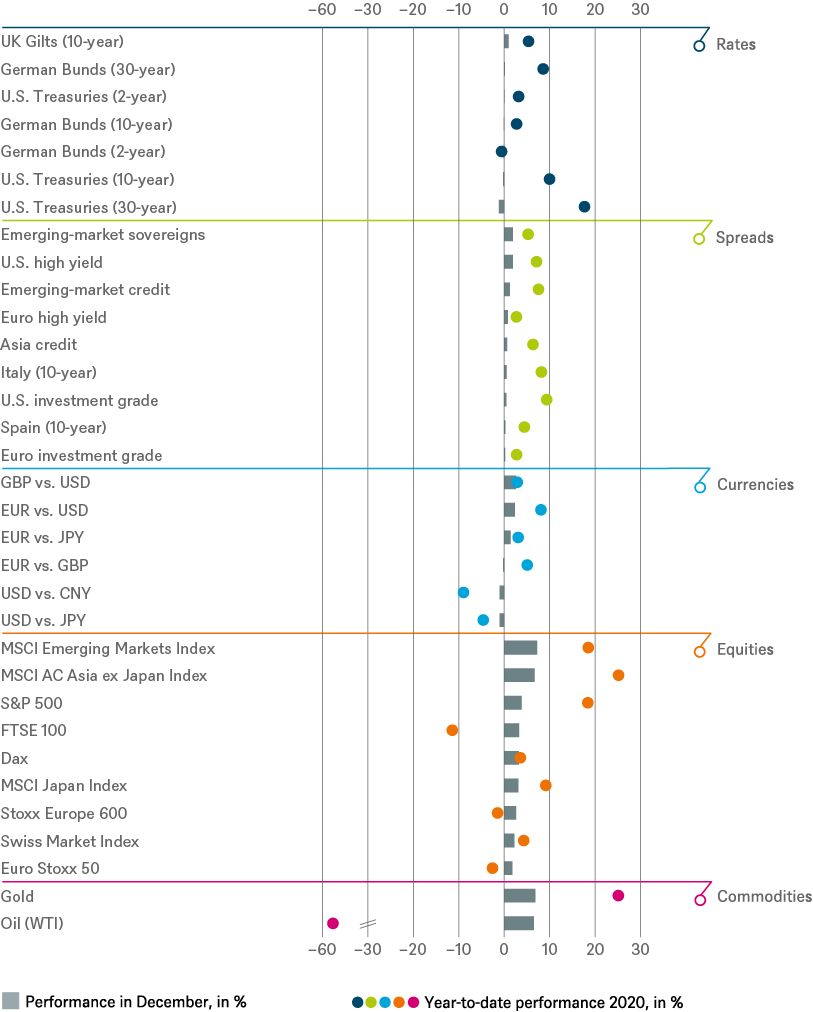 Past performance is not indicative of future returns.
Sources: Bloomberg Finance L.P., DWS Investment GmbH as of 12/31/20


Sources: Bloomberg Finance L.P., DWS Investment GmbH as of 1/6/21
Past performance is not indicative of future returns. Forecasts are based on assumptions, estimates, opinions and hypothetical models that may prove to be incorrect.

4 . This can be seen, for example, in the implied inflation expectations for ten-year inflation-linked U.S. government bonds, which have risen from 1.8% to over 2% since the beginning of December, the highest level since the end of 2018.

29 . Relative
to the Bloomberg Commodity Index

The bulls are back in town
See all articles