A downturn unlike any other?

Why we remain cautiously optimistic on equities – with a strong emphasis on being cautious!

Around the globe, the rapidly spreading Coronavirus has created unprecedented political, public-health and economic crises. Not that you would necessarily know, if you had fallen asleep in mid-February and were only now checking up on your stock-market portfolio. At the time of writing, in the last days of April, the S&P 500 is a mere 15% below its February peak, roughly where it was trading in May 2019.

Other stock indices have suffered more, notably in emerging markets. Then again, you might expect as much in the face of a mere political crisis in Brazil; collapsing commodity prices hitting Russia and South Africa; or a strong dollar squeezing heavily indebted emerging-market corporate borrowers from Turkey to India. Instead, all of these countries are also – still – in the early stages of the pandemic. By contrast, China has slowly started to emerge from the damage caused by the initial outbreak in the first quarter. China's CSI 300 Index is down less than 5% in the year to date, having recovered most of its earlier losses.[1]

In Europe, meanwhile, policy makers continue to squabble about a common response to the pandemic. As for Brexit, that – ultimately – happened in January. The UK's future relationship with its main trading partners remains unresolved, however. That said, it is increasingly hard to remember why exactly Brexit dominated market fears for so long, now that there is a global pandemic to worry about.

There are some hopeful signs that the initial waves of Covid-19 may have peaked on both sides of the Channel, and, according to more tentative signs, in some of the worst hit parts of the United States, too. What is already becoming clear is that slowing the pandemic's initial waves has come at a significant economic cost in all afflicted countries. The required social-distancing measures have pushed the global economy into recession. Global economic activity and corporate profitability clearly peaked in 2019. The length of the economic shut-down will critically determine the magnitude of the negative economic impact.

Fiscal and monetary policy in most rich countries has also shifted into crisis mode, with a range of unprecedented responses in order to mitigate the near-term economic hardship. The long-term implications of the massive rise of public debt levels, financed largely via central-bank balance-sheet expansion, are far from clear. Some observers see parallels with the ancient concept of seigniorage, or the debasement of coinage by a sovereign to fund wars or other royal excesses, with a pick-up in inflation as the likely end result. For now, however, rising unemployment and the resulting lack of demand could cause deflationary downside pressure on corporate profit margins instead.

As for the increasingly fashionable idea of holding equities as a hedge against any eventual uptick in inflation, you might want to ask someone old enough to remember the 1970s before betting on it. Or even better, read a classic paper by Franco Modigliani and Richard Cohn. Back in 1979, after a decade of inflation, the pair was admonishing market participants for being far too harsh in how they valued stocks. "Because of inflation-induced errors, investors have systematically undervalued the stock market by 50 per cent."[2] Such thinking may have helped win Modigliani the Nobel Prize in 1985. It left market participants unimpressed and unwilling to pay up, though, until inflation had been brought to heel in the early 1980s.

The case for equities, therefore, rests firmly on the idea that the world after Covid-19 will in some important ways still resemble the one we were familiar with before the crisis: low inflation with interest rates even lower. That could support even higher stock-market valuation multiples for even longer, potentially to the detriment of future returns. The crisis might also accelerate the trends towards digitalization. As our base case, we assume that the technology and social-media sectors keep delivering strong operating performance. Working from home, video conferencing and grocery e-commerce might also create new and lasting niche opportunities.

The most important assumption underlying our optimistic view on equities is that of the downturn being relatively short-lived and not leaving too many lasting scars. Such a scenario would, among other things, require most countries to avoid or at least contain further Covid-19 outbreaks, without having to resort to new country-wide lockdowns. Vaccines and better medical treatments would need to materialize within the next 12-18 months. And when it comes to paying for the crisis, there are already some ominous signs that shareholders, too, will directly or indirectly foot part of the bill. Plenty of dividends have already been cut, either for economic or political reasons. The longer the crisis, the bigger such pressures will probably be.

Much will also depend on the outcome of November's U.S. elections. As we expected, Democrats have nominated a centrist candidate for the presidency, former Vice President Joe Biden. Unlike more adamantly left-wing candidates of the primary contest, Mr. Biden appears less inclined to meddle with drug prices or to introduce measures to heavily tax capital gains or wealth. Tight Senate contests may also limit what any new administration will be able to do. Given how volatile U.S. politics has been in recent years, however, a reversal of recent U.S. corporate tax cuts can certainly not be ruled out.

On the whole, our optimistic base case is very fragile and lacks a strong conviction. Obviously, there is material downside risk for equities if the crisis turns out more severe. Market multiples are a psychological seismograph of investor confidence. They might well take a prolonged period to recover to previous peak levels. Whatever the longer-term market outcome, short-term volatility is likely to remain very high and markets are likely to test previous lows.

In the meantime, virtually all sectors are negatively impacted by the crisis. Corporate treasurers across all sectors will try to preserve liquidity by cutting discretionary spending, delaying capex and potentially by laying off staff eventually. However, the severity of the shock varies, creating potential stock-picking opportunities. Tourism, airlines and restaurants face existential challenges, while the oil sector has to handle the dual challenge of excess supply and falling demand at the same time. Global banks are in significantly better shape than in 2008, but already have to lift bad debt provisioning. Heavily leveraged companies are likely to underperform. We prefer sticking to a "quality bias," i.e. companies with strong balance sheets and relatively resilient cash flows.

Following its recent rebound, the S&P 500 is trading at 18.5 times trailing earnings, above its average valuation of the past 20 years. 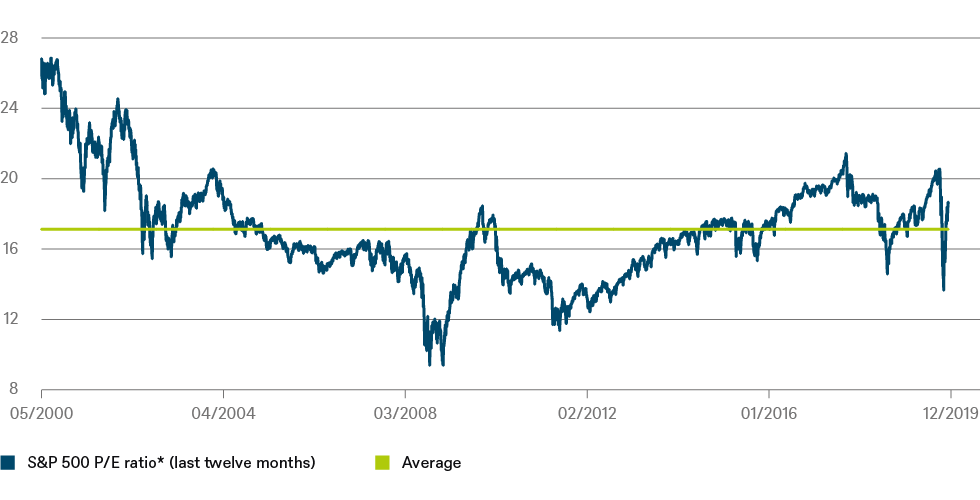 Due to the outsized U.S. fiscal stimulus, the recession in the United States looks set to be shallower and shorter than in the Eurozone. U.S. markets have certainly moved on swiftly from the initial panic phase. For the moment, investors appear determined to look through the crisis – increasing the scope for temporary setbacks. After all, U.S. equity markets are once again trading at valuations which would have looked frothy not so long ago, even in the absence of a global pandemic.

With few technology stocks, and relatively few growth stocks of any sort, European equities have already had a relatively weak performance over the past decade. Covid-19 looks unlikely to change that. The heavy weighting of oil stocks in some country indices could further delay their recovery. Of course, predicting how investors will value extremely volatile earnings streams during the coming 12 months is highly speculative. Renewed market turbulence could present stock-picking opportunities.

In theory, trade-dependent Japan should benefit from any signs of the world economy rebounding. Balance sheets are solid and the political environment is stable. Corporate governance and returns on capital have improved since the last financial crisis. When the time comes, all of this might make Japanese stocks an attractive way to benefit from a global recovery. Meanwhile, however, a deteriorating economic backdrop or any renewed tensions between the U.S. and China could dampen investor enthusiasm.

In the aftermath of various trade conflicts, many emerging markets entered the 2020s in a weakened state. Instead of the hoped-for recovery, Covid-19 is cruelly unveiling many previously existing weaknesses, notably in Turkey, South Africa and Mexico, but also in Brazil, India and Russia. But many of the risks appear to have been priced in already. China, which was hit first by the virus, has seen its equity market recover. Differentiation at the industry and country level remain key.

* Our assessment is relative to the MSCI AC World Index, the last quarter's view is shown in parentheses


Sources: Bloomberg Finance L.P., DWS Investment GmbH as of 04/30/20
Past performance is not indicative of future returns. Forecasts are based on assumptions, estimates, opinions and hypothetical models that may prove to be incorrect.

This information is subject to change at any time, based upon economic, market and other considerations and should not be construed as a recommendation. Past performance is not indicative of future returns. Forecasts are based on assumptions, estimates, opinions and hypothetical models that may prove to be incorrect. DWS does not promote any particular outcome in the upcoming elections.

With broad diversification across different asset classes, multi-asset funds can turn out to be yielding portfolio building blocks -- even in difficult market phases.
Jan 12, 2021 Equities

2020 was better than its reputation – at least from an investor's perspective. In 2021, on the other hand, companies and consumers should fare better while investors may face a more difficult time. Broad positioning will be important.
Jan 05, 2021 Sustainability

Sustainable investment products are booming. However, investors should be able to answer a few essential questions before investing in funds that promise long-term relevance for society and the environment.
Dec 18, 2020 Equities

The United States is well ahead – in the stock market.

S&P 500 earnings could exceed their 2019 levels as early as 2021. This partly reflects the index's sector composition, which is significantly more favorable than that of European indices.
Dec 15, 2020 Equities

This information is subject to change at any time, based upon economic, market and other considerations and should not be construed as a recommendation. Past performance is not indicative of future returns. Forecasts are based on assumptions, estimates, opinions and hypothetical models that may prove to be incorrect. DWS does not promote any particular outcome in the upcoming elections.