Overall, the capital markets rippled along in a positive and fairly relaxed manner in June, to the satisfaction of most investors. Major turbulence was reserved for niche markets. The month’s chief excitement was the U.S. Federal-Reserve (Fed) meeting. The interest-rate forecasts of FOMC members pointed now to two interest-rate rises by the end of 2023. Some market observers were quick to call that a "policy error" by the Fed. In the end, however, investors reacted more calmly than the initial market response suggested. After about a week, many prices were back where they were before the meeting – with good reason. The opinions of non-voting committee members are also included in the implied interest-rate forecasts (the dot plots) and we believe both the Fed and the European Central Bank (ECB) retain the flexibility to keep interest rates low and maintain bond purchases if the worst comes to the worst.

But it is also true that the central banks' hands could be forced by inflation. Whether recent price developments will remain temporary or become more deeply entrenched in the system will be an open question for some time.

June offered interesting new pointers on that question. Various sectors, especially leisure and hospitality, reported staff shortages and wage pressures. Home prices in the United States rose at the fastest pace in decades[1] and, in addition to oil (up by about a further 10% in June), other commodity prices again pushed higher. On the other hand, the price of copper fell significantly – almost by double digits – for the first time since March 2020, and much talked about lumber became 45% cheaper in June alone.

Inflation concerns have therefore eased in the markets. Inflation expectations[2] in the United States have fallen from 2.57% in mid-May to 2.34% most recently. This is even though U.S. consumer-price inflation was reported at 5% for May, the highest since 2008.[3]

... gold and silver were among the biggest losers in June.

As nominal 10-year Treasury yields also declined slightly, real yields remained largely flat. This mix did little to help precious metals: gold and silver were among the biggest losers in June. Where the Fed's statements made the most impact was on the yield curve. While the difference between two-year and ten-year U.S. Treasury yields was 146 basis points (bps) at the beginning of the month, 30 days later it was only 122. Accordingly, the global financial sector was among the main victims on the stock markets, losing more than 3% in June. Technology, on the other hand, returned to the top, with a gain of 6%.

In terms of regions, an unusual triumvirate led markets: United States, Latin America and, in first place, Switzerland, whose Swiss Market Index (SMI) rose by over 5%. The Stoxx Europe 50, on the other hand, managed only 0.7%, while Asia's emerging markets even fell slightly. Also, worth mentioning was another bad month for bitcoin, which has now surrendered nearly 50% from its peak. All cryptocurrencies combined have lost over a trillion U.S. dollars in market capitalization[4] but, reassuringly, this does not yet seem to have negatively impacted other asset classes.

A review of June would be incomplete without a mention of the G7 summit in Cornwall in England, where an agreement was reached, in principle, on the introduction of a global minimum tax. But the road to implementation is likely to be a long one.

Also thinking in longer timeframes was the Dutch court, which ordered an oil and gasoline company to almost halve its CO2 emissions by 2030. Here, too, one must pay close attention to the detail, but many activists are hoping that this ruling will have a strong signaling effect.

Covid, finally, should not be left out of the review. As encouraging as the progress with vaccinations and the decline in case numbers, particularly in Europe and the United States are, the Delta variant is making many investors nervous. This nervousness was expressed, among other things, in another weak month for travel and leisure companies.

We remain negative on sovereign bonds as we expect yields to creep up gradually over the summer. For German Bunds we are skeptical across the whole yield curve as we believe inflation expectations are too low. For the Euro periphery we are neutral on Italian sovereigns as strong economic data on the one hand and fear of the ECB reducing its buying of Italian paper are cancelling each other out. For U.S. Treasuries we are mainly negative on 2 and 10-year bonds as stronger economic data could come in, but at the same time we don’t believe inflation expectations are set to rise further for now.

In corporate bonds we remain slightly positive overall, on the back of our positive view on Euro investment grade (IG) and U.S. high yield (HY). For the former, end of second-quarter seasonality points to lower volatility and lower supply as new issuance was already down by 40% year-on-year recently. For high-yield spreads have continued to tighten but are still not at pre-crisis levels: for example, CCC-rated bonds are still 100 bps above their pre-Covid lows, leaving room for further tightening. Inflows into HY funds are intact while new issuance has become a bit lower. We have seen more rating upgrades than downgrades in this space.

For emerging markets, the picture is mixed for both sovereigns and credit. For both segments we prefer HY over IG as it is the segment that profits most from improving commodity prices.

We remain cautious and selective on China but retain our positive stance on Asian credit. In currencies we are neutral across the board.

In equities we are sticking to our previous regional and sectoral positioning. After three months of underperformance, Asia has performed with global markets over the past two months. We still see the most potential in this region. In terms of sector and style we stick to our preference for affordable growth stocks, mainly in IT, as well as further adding to selected cyclical stocks.

Many believe tech growth stocks are too expensive. Certainly, they are not cheap, but we believe valuation is a function not only of the level of multi-year growth but also of the consistency and quality of that growth. Software scores quite well for that reason, and many of the positive attributes of software are shared by internet, ecommerce, payments, and other hard to categorize secular growth sectors in technology and communications. Software has always been a relatively high-quality business. The "product" is essentially intellectual property which is hard to copy, has very high margins, and comparatively small capex/development cost.

The reporting season is about to start and from what we have seen so far in economic numbers and early reporting, we believe this could be another quarter in which results beat expectations by a wide margin. How companies talk about their margin pressures, difficulties finding employees and order levels will play a big role in investors' assessment of whether sales growth and profit margins will peak in this quarter or momentum will hold. Investors' positioning now is already more risk averse than in recent months.

Crude prices in June continued to trade higher, with Brent even surpassing the 75 U.S. dollars-per-barrel mark in overnight trading for the first time in more than two years. We could see continued volatility while the market digests recent events such as the OPEC+ meeting. We would expect OPEC members to let demand take the lead and increase production to meet that demand.

For base and precious metals June was a bit of a rough month, with the Fed's hawkish tone hurting gold and China weighing in on price speculation in commodity markets and releasing copper, aluminum and zinc reserves. As the dust settles, we maintain our preference for base metals as rising demand should keep the markets fundamentally supported.

3 / Past performance of major financial assets 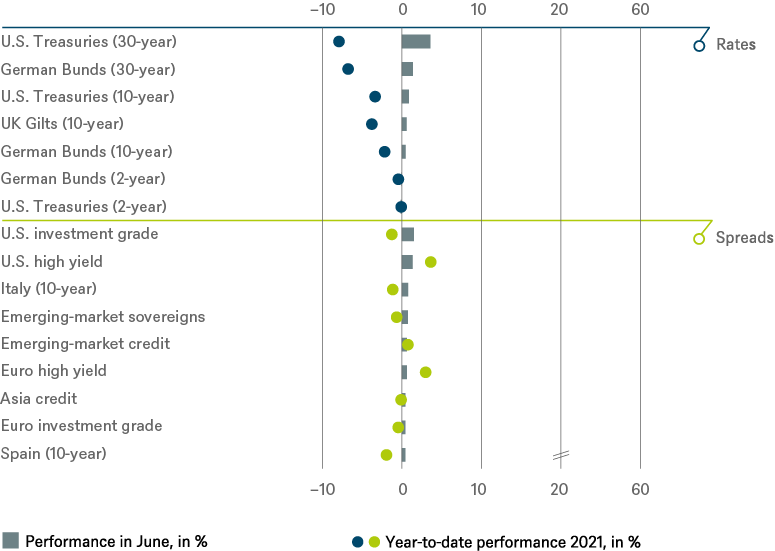 Past performance is not indicative of future returns.
Sources: Bloomberg Finance L.P. and DWS Investment GmbH as of 6/30/21 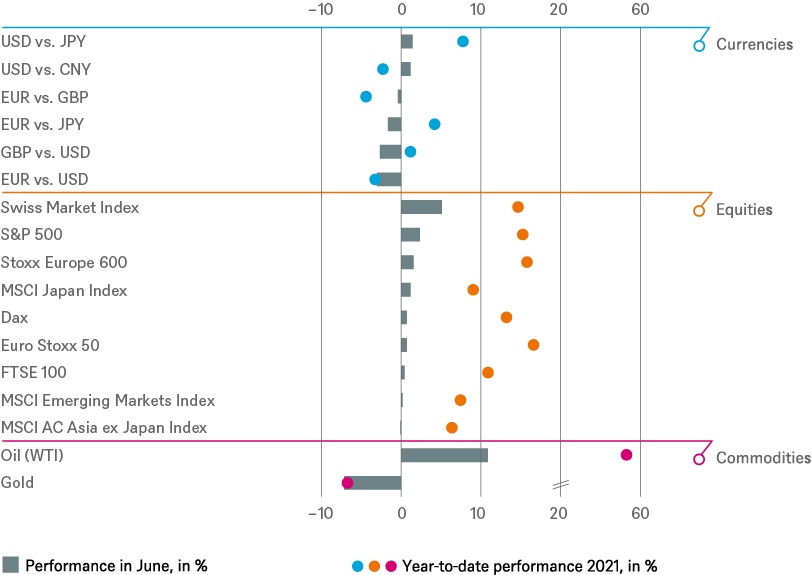 Comparing the current situation to the oil shocks of the 1970s suggests that these are very different phenomena.
Sep 14, 2021 Macro

What could the parties' election programs mean for future fiscal policy?

Bring on the goods' inflation

Prices of goods have recently risen faster than those of services, for the first time in 25 years. We think this special Covid trend will turn around again soon. A pity, actually.
See all articles
Share this page

1. See Coinmarketcap.com. Market Cap fell from its peak on May 12th to end June by more than USD 1.1 trn.

2. U.S. home prices surged at their fastest pace ever. The S&P CoreLogic Case-Shiller National Home Price Index, which measures average home prices in major metropolitan areas across the nation, rose 14.6% in the year that ended in April, up from a 13.3% annual rate the prior month. April marked the highest annual rate of price growth since the index started in 1987. Source: WSJ, June 29th.

29. Relative
to the Bloomberg Commodity Index

You are now seeing the Hong Kong version of the page despite being located in USA. You can change the country below.