How long will OPEC+ keep oil up?

2019 was a very eventful year – from geopolitical tensions at the Strait of Hormuz to a large initial public offering – and just because we expect slower growth for 2020, we do not believe that it will be any less exciting. Particularly, the energy sector is keeping and most likely will keep us on the go. OPEC+ agreed to cut the output target by an additional 500,000 barrels per day (b/d) by March 2020 (from the 2018 baseline levels). In the short term[1] , production cuts by OPEC+ as well as looming supply disruptions might support prices. We stick, however, with our pessimistic view on oil prices next year. We doubt the OPEC+ agreement will be stable. Cartels are vulnerable to cheating; OPEC+ is no exception. The first warning sign for OPEC+ is that it could only agree on production cuts until March – a very short time span. Secondly, Iraq, Nigeria and Russia have already not adhered to the agreed output cuts. Finally, Saudi Arabia stated that it would reduce its target by an additional 400,000 b/d but in fact that would take its output down to roughly the level it has averaged in the past nine months. This does not seem to be a genuine cut and it will only be implemented if other members comply with their production limits. Also U.S. shale growth and the recent pick up in U.S. rig count make us skeptical about the strategic outlook. Additional production capacity in Norway and Brazil next year only supports our view.

The outlook for natural gas is also not bright. It has not only been the big underperformer during the past 30 days, but also year to date. A few factors are against gas. Qatar, the biggest natural-gas producer, has announced that it will match U.S. production increases one to one. Warm weather is forecast, especially in the Midwest and on the east coast. And China is investing heavily in natural gas in an effort to become more independent, exacerbating global oversupply.

Precious metals look better. Gold has had a good year with a gain of over 10% year to date but it is only playing second fiddle to palladium, which has risen by over 50% this year.[2] Heavy demand for the metal for automobile catalysts is the reason – and we do not expect that to weaken in the near future. Both producers (palladium miners) and consumers might be said to be driving this trend. Producers obviously profit from the increased product margin – and strikes at mines are only adding to the price premium. Then there are the consumers – mainly carmakers – who have to bear the high price but the cost of palladium is low relative to their overall cost of production – and cheaper than undertaking costly research-and-development efforts to find a suitable substitute. High palladium prices do of course make it potentially attractive to open new mines and add to supply and higher profit margins offer a reduced payback period. But doing so presents a very risky multi-year venture – and electric vehicles (EVs) are coming down the road, adding to the uncertainty for investors. Well and EVs have no need for palladium heavy automobile catalysts, so that producers rather abstain from opening new mines. And so we are optimistic about further palladium-price appreciation. We believe gold, on the other hand, is unlikely to get any further help from the Federal Reserve in 2020, as we do not expect another interest-rate cut. And steady U.S. rates are supportive for the U.S. dollar, which is also a negative for gold. And then there is the outflow from exchange-traded funds (ETFs). We concede, however, that the outflow from ETFs is only gradual and in no way a sell-off. And given the uncertainty in the market due to the usual suspects (i.e. Brexit, U.S. elections and trade disputes), we believe investors still see gold as a preserver of value. We expect that the downside to gold prices is limited and stay neutral for now.

In base metals copper has been the outperformer the last 30 days. It has profited from an easing in trade war rhetoric, thanks to the phase-one trade deal. Coupled with an improvement in U.S. manufacturing, low inventory levels and lagging supply, we expect copper to remain the stand out among the base metals as macro sentiment continues to improve and fundamentals remain attractive. Nickel looks less positive. In September's commentary we pointed out that it will likely benefit from Indonesia's ban on nickel-ore exports [DWS CIO Commodity Commentary as of 9/23/19]. But market fundamentals turned out differently. China bought the metal heavily before the ban contributing to raw-material inventories that are high and a market currently oversupplied. This is likely to change in the second half of 2020 and our original thinking may therefore apply.

Regarding aluminum, we believe that the market is well supplied and likely to move into surplus in 2020. The tariffs imposed on steel and aluminum imports from Brazil and Argentina by the United States are a sideshow in our opinion, with little economic impact but rather may have been made with the intention to win over voters for President Trump in swing states. Brexit and U.S.-China headlines are more influential for aluminum.

Developments within agriculture have been less transparent. While China might buy an additional 32 billion U.S. dollars in farm goods over the next two years under the new trade agreement, Robert Lighthizer, U.S. Trade Representative and Liu He, Vice Premier of the People's Republic of China, are not revealing the specific product-purchase targets most likely to avoid noise in the market. We therefore remain on the sidelines and wait for further information before positioning us. Independent of the trade negotiations, we believe China could start investing in E10 biofuel, which combines unleaded petrol with 5% to 10% ethanol, despite its effort to be a leading electric-vehicle (EV) market. If that should occur we believe it would be an incremental, sustainable solution and easier to implement than setting up EV infrastructure in a challenging macro environment. E10 would increase China's ethanol imports and benefit global sugar and corn prices. 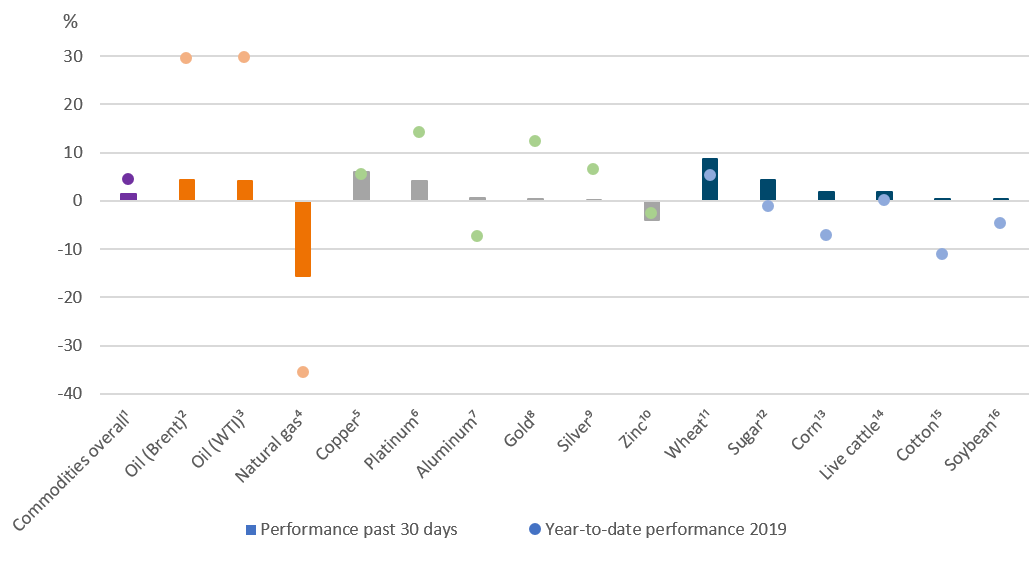 
Past performance is not indicative of future returns.
Sources: Bloomberg Finance L.P., DWS Investment GmbH as of 12/17/19

All opinions and claims are based upon data on 12/20/19 and may not come to pass. This information is subject to change at any time, based upon economic, market and other considerations and should not be construed as a recommendation. Alternative investments may be speculative and involve significant risks including illiquidity, heightened potential for loss and lack of transparency. Alternatives are not suitable for all clients. Past performance is not indicative of future returns. Forecasts are not a reliable indicator of future performance. Forecasts are based on assumptions, estimates, opinions and hypothetical models that may prove to be incorrect. Source: DWS Investment Management Americas Inc.