After shrinking slightly during the second quarter, statisticians reported a slightly positive German gross-domestic-product (GDP) growth rate for the third quarter. This means that Germany has barely escaped a technical recession. Recent data, however, is unlikely to reassure sceptics.

Many appear to think: too much regulation, excessive bureaucracy, too expensive social systems, too austere fiscal policies, a lack of competitiveness, an exaggerated focus on environmental protection, and so on - the list of arguments could be continued. Europe will never be able to keep up with dynamic economies such as the United States, one hears again and again. Older generations in Germany may remember that such chatter is nothing new either. Periods of pessimistic chatter have been a regular feature in German newspapers and television talk shows since the 1980s.

However, a look at the International Monetary Fund's (IMF's) growth statistics reveals a somewhat different picture. Looking at overall GDP growth rates for the economy, the United States is indeed clearly in the lead. Adjusted for population growth, i.e. measured by economic growth per capita, however, the United States and Germany have recorded exactly the same economic growth since the turn of the century, as our "Chart of the Week" demonstrates. And this is only thanks to the current phase of economic weakness in Germany - which probably has more to do with protectionist measures coming out of Washington than the political decisions in Berlin. In the longer term, we believe there is little reason for exaggerated pessimism. 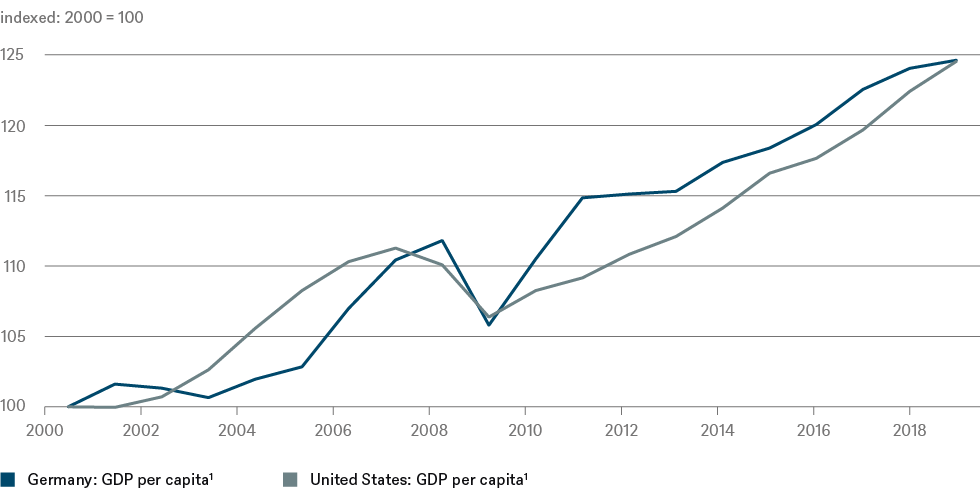