Hail to the consumer! We owe it largely to private households that the economic slowdown caused by the global trade conflicts and a weakness in the manufacturing sector did not push us into a broader recession as yet. Consumers have proved remarkably resilient in the face of a series of bad news, most notably on global trade. As our "Chart of the Week" demonstrates, consumer-confidence surveys continue to point toward an upbeat sentiment, which should translate into ongoing robust consumer demand. By contrast, the mood on executive floors appears to be much more pessimistic. In a comparable survey[1], CEOs judge the situation as bad as it was last in 2011, and before that during the great financial crisis.

A look at past experience reveals two observations: On the one hand, boardrooms tend to be quicker in recognizing the onset of recessions than the large majority of private households. On the other hand, mood swings among managers appear to be more pronounced and more frequent. Over the past decade, for example, the spirit on the executive floors was already hammered several times, only to brighten up again afterward.

Which brings us back to the current situation. Naturally, we are drawing some confidence from the persistently good mood among consumers. Nevertheless, the drop in sentiment among business leaders is a concern. We think it reflects the persistently high level of political uncertainty, whether with regard to Brexit or the U.S.-Chinese trade dispute. This not only has an impact on sentiment, but also on investment behavior. We believe it will be up to politicians to ensure a lasting turn for the better by, for example, bringing about a significant easing in the global trade conflict. 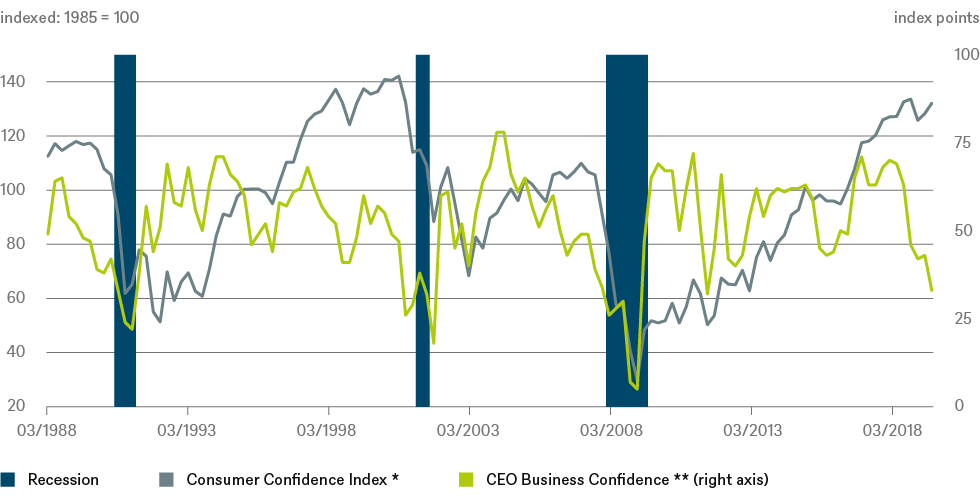