The division of the world into developed (DM) and emerging markets (EM) may be an out of date classification. To a degree the current trade conflict is an example of how little separates the developed from the emerging. The United States is reacting extremely nervously to China's rise to second largest global economy, right next to America in the global power hierarchy. In capital markets, on the other hand, the old order still prevails – at least in the perceptions and classifications of the norm-setting index providers. The division into DM and EM sometimes has somewhat peculiar effects. Countries such as South Korea, Hong Kong or Singapore are listed as emerging markets, along with Russia, Saudi Arabia or Pakistan. But this does not change the fact that for many investors emerging markets are a separate, self-contained asset class, not to be mixed with, for example, U.S. corporate bonds.

In our view, Asian hard-currency bonds in particular do not deserve this skepticism. On many parameters they are at least on par with developed countries, and well ahead of most other EM regions. Ownership is one aspect of this superiority. Almost four-fifths of Asian dollar-bond issues are now taken up by Asian investors, which, in our opinion, increases this asset class's stability.

What favors Asian bonds less is that, although listed as emerging, they generally offer returns close to those of developed-country assets. This has become less the case recently, however. In the spring, the U.S. and European central banks made it clear that their key interest rates might go down again. This accelerated the decline in yields on developed bond markets that had already been in place for some months, and generated a rise to a record 13 trillion dollars in bonds with negative yields worldwide in June.[1] Negative interest rates have even spread to the eastern periphery of Europe, with Poland, the Czech Republic and Hungary also now receiving money for borrowing. Asia is still a long way from this, as the chart below shows. And in the current environment of ultra-low interest rates, in which every basis point counts, this should ensure more attention for the region. Developed central banks' renewed dovishness has also dissipated investors' fears that liquidity could flee emerging markets.

Emerging-market bonds by region and status (corporate vs. sovereign) 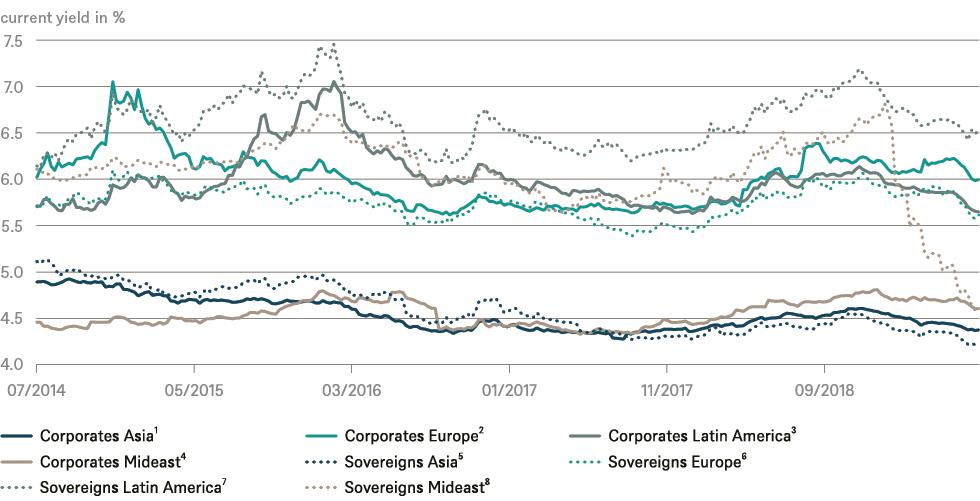 The chart highlights a number of distinctive features of emerging-market bonds.

The Asian bond market is currently being driven by a range of global and local factors.

After a long shadowy existence, the Asian bond market has developed dynamically in recent years. As a result, at $763 billion, it is now the largest of the three major emerging-market regions (in terms of outstanding dollar bonds). The J.P. Morgan Asia Credit Index (JACI Index – including sovereign and corporate bonds), unlike the indices shown in the chart, is not limited to the emerging markets of Asia and is slightly larger at 977 billion, almost as big as the U.S. high-yield market (1.2 trillion dollars). However, Asian-bond indices cover a much more diversified universe in terms of countries and sectors.

Asia catches up and overtakes: market sizes of the three most important emerging-market regions 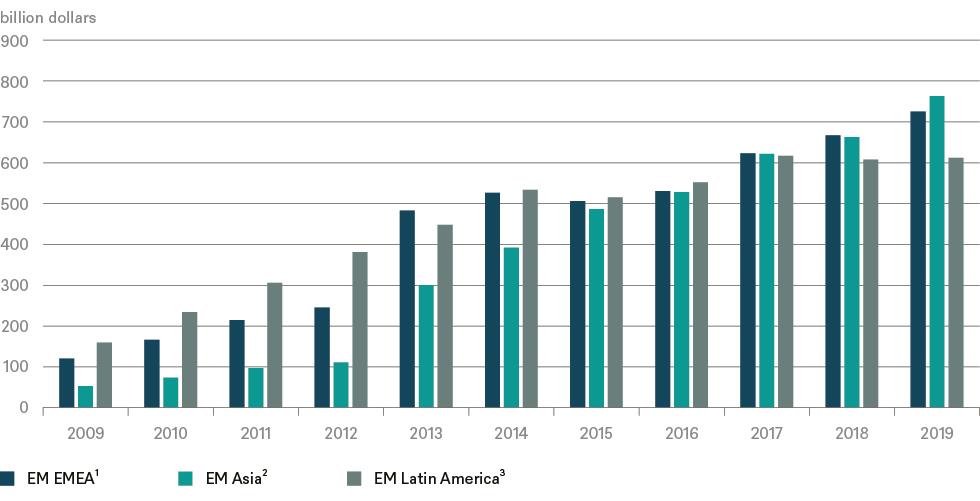 
The way in which Asia has taken the lead in terms of quality and quantity is particularly striking in corporate bonds. The J.P. Morgan Corporate Emerging Markets Bond Index (CEMBI) has a Standard & Poors rating of BBB+ and 299 issuers in Asia compared to: 191 issuers in Latin America with an average rating of BB+; 67 issuers and also a BB+ for emerging Europe; and 62 issuers for the Middle East, with a rating of BBB-. Default rates in Asia have been below those in Latin America and Europe for years. The credit-quality advantage is also reflected in the following chart, which shows the correlations of the Asian bonds with U.S. bonds. While Asian bonds were still most strongly oriented towards U.S. high-yield bonds in the 2008-12 period, the correlation coefficient has narrowed from 0.45 to 0.07. U.S. government bonds and U.S. corporate bonds with investment-grade status have now become the main drivers, almost on a par with each other. But with a coefficient of around 0.3, one cannot speak of a dominant impulse here either.

In contrast to the JACI the other corporate EM indices are much more correlated to the United States, which underscores the potentially greater diversification qualities of Asian bonds. The downside is that the trading volume is equally distributed among a wide range of countries and issuers. We estimate that about half the emerging Asia's bonds fulfill the liquidity requirements of the average institutional investor. 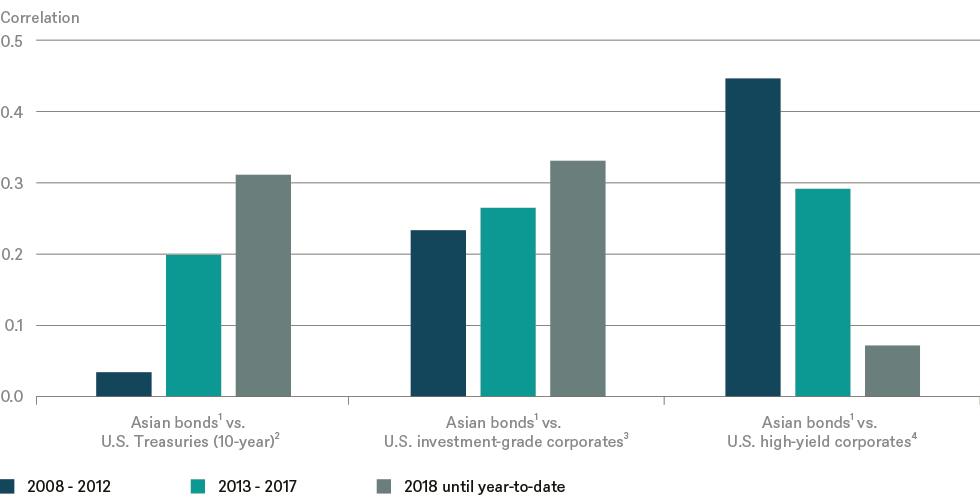 
A good average rating for Asian bonds may also be partly responsible for the fact that they have lower volatility than corporate bonds from emerging Europe and Latin America. Another reason for the greater stability in Asia: a far greater proportion of the bonds issued there, 74%, are bought by domestic investors. The fear of speculative, hot money which can be withdrawn from a region just as quickly as it can flood in, is therefore much less justified in Asia than in the other regions.

The growth in Asian domestic investors reflects many factors. One is rising prosperity, combined with rapidly developing financial infrastructure, in terms of products and providers, and sound regulation. Asian bonds are in demand in the region for private retirement provision or as an investment away from the real-estate market and therefore bond supply now has the potential to largely be absorbed by local demand. In our opinion, this anchor of stability should have a positive impact on foreign demand for Asian bonds.

The current DWS view on the market is neutral

Other parameters need to be looked at in order to determine how attractive the asset class is in the short and medium term. The CIO view on Asian credit is currently neutral, mainly due to our concern that the market might not be able to cope with a sharp rise in issuance volumes. Up to and including June, bond issuance in the course of the year was 27% higher than in the previous year. In June alone, bonds worth 36 billion dollars were issued. At 34% of the total volume, the share of high-yield bonds is significantly higher than their share in the outstanding volume. Half of this new high-yield issuance is in Chinese real estate, a sector we do not particularly favor. So far, the overall supply has been well absorbed. But we should not simply extrapolate this trend, since it has been supported by benign global capital markets during the period.

The chart below shows how Asian bonds have in the longer run tracked U.S. government bonds, so that yields have fallen despite the flood of issuance. One driver for this rally, global central banks' renewed dovishness this year, has worked especially well for EM assets. 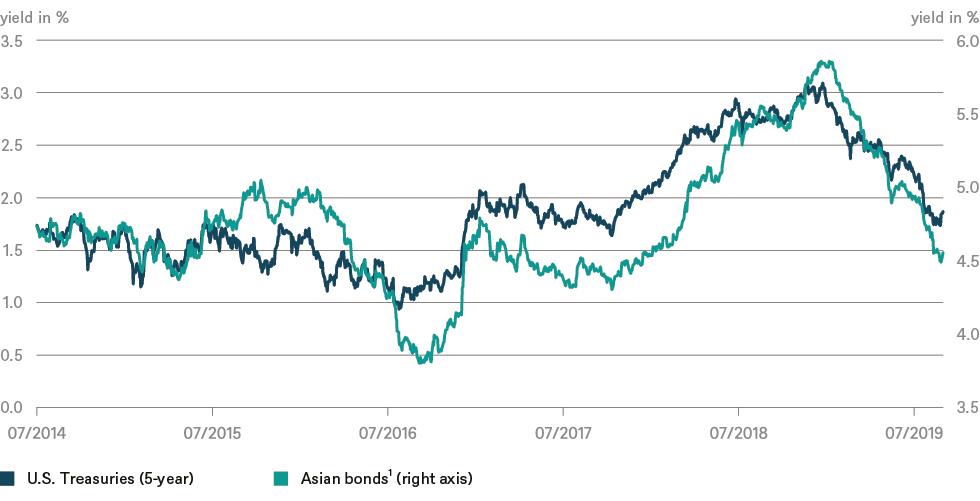 
Our discussion has been entirely about hard-currency bonds – predominantly U.S. dollar bonds – but the currency component of emerging-market investments should not be ignored. The debt sustainability of a country also depends on the exchange rate, which affects both exports and interest payments. However, we do not expect the dollar to continue the appreciation (against a trade-weighted currency basket) that began at the beginning of 2018, but, as in the past six months, trades sideways.

The development of the Chinese-U.S. conflict remains important for Asian markets – as Chinese stocks have shown in the past year during which the MSCI China Index has underperformed both the MSCI World and the MSCI Emerging Markets Index. Investor nervousness has been less noticeable in Asian bond indices, probably because investors tend to switch from equities to bonds in periods of higher uncertainty. The conflict is nonetheless an important factor. After all, China has a dominant share of 51% in the JACI. But from an investor's point of view, we would not follow this weighting at the moment anyway, but would consider reducing China's share in favor of other regions including Indonesia and India among others. We believe that the most watched topics by the markets, tariffs and corporate-sanction lists, could remain calm for the time being. But in this environment, a medium-term de-escalation remains wishful thinking. The extent to which China will be prepared to make economic sacrifices for political reasons remains to be seen but this risk should not be neglected. At the same time, however, it should not be overlooked that Asia today is much less dependent on investment and demand from the West than it was ten years ago. Not least because of the increased prosperity and increased domestic trade in this region.

Increasing premium for the high-yield segment

The chart below shows the rising differentiation between investment grade and high-yield bonds over the last ten years. While the spread premium for high-yield bonds was only 1.5 in 2009, it has now risen to more than 3. We believe this reflects increased discrimination from institutional investors, who have tended to focus on discrete allocations to the higher-quality parts of the market. 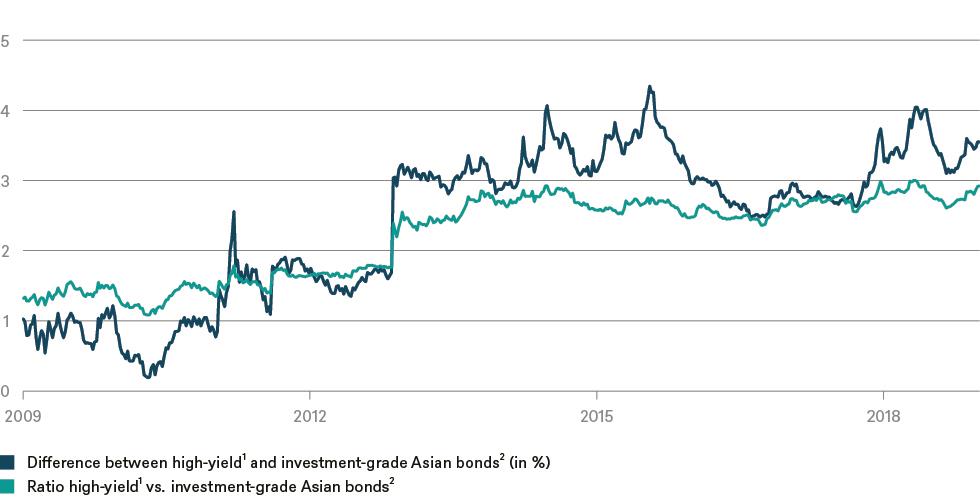 The bond market in Asia is not easy to grasp as it is defined differently by every index provider. Countries such as South Korea, Singapore or Hong Kong are sometimes assigned to the Asian EM region, sometimes not. We often referred to the JACI (Index), which does not make this division and includes all countries of the region (excluding Japan, which is seen as a developed market). It also includes both government and corporate investment grade and high-yield bonds, making it the broadest index for Asian dollar bonds.

Other popular indices are the JPM EMBI Asia (Index), which tracks government bonds, and the JPM CEMBI Asia (Index), which tracks corporate bonds. To add to the confusion, the former includes bonds from Singapore, Hong Kong and Korea, while the latter does not. And while the yield difference between these two indices is negligible, it is clearly visible when Asian bonds are divided into investment grade and high yield. However, high-yield bonds are far less important in Asia than in other emerging markets. In the JACI, for example, which combines both classes, less than one-fourth of the outstanding bond volume is accounted for by high-yield bonds.

Past performance is not indicative of future returns.
Sources: Bloomberg Finance L.P., DWS Investment GmbH as of 6/30/2019

2 . The chart shows this clearly in the corporate bond index for the Middle East, where yields have fallen quite abruptly – by over two percentage points – since the beginning of the year due to the inclusion of oil-rich countries in the index.

This information is subject to change at any time, based upon economic, market and other considerations and should not be construed as a recommendation. Past performance is not indicative of future returns. Forecasts are not a reliable indicator of future performance. Forecasts are based on assumptions, estimates, opinions and hypothetical models that may prove to be incorrect. Diversification neither assures a profit nor guarantees against loss. It is not possible to invest directly in an index.
DWS Investment GmbH as of 7/25/19
CRC 069453 (07/2019)