The month of September showed how quickly one may become dulled to extremes. Much of what has happened in the past 30 days would have provoked horror and strong market reactions a few years ago. But now markets are shrugging much of it off, and still finding impetus in hopeful signs. On the final day of the month, for example, vague hopes of an agreement in the U.S. Congress on a second stimulus package helped U.S. markets achieve a small final spurt. Republicans and Democrats continue to argue about the size and content of the stimulus which, at somewhere between 1.5 and 3.4 trillion dollars, depending on the outcome of the argument, is equivalent to between about 7% and 15% of American gross domestic product (GDP). Also at the end of the month, the first TV debate between the two U.S. presidential candidates was broadcast. That it was undignified meets the consensus of international reporting and yet falls short. For this is also the first election campaign in which the incumbent President does not want to commit to leaving office in the event of an election defeat. That parts of his electorate will take such statements more seriously than many professional observers is to be feared. Media revelations that the President had deliberately downplayed the dangers of the coronavirus, despite his early knowledge of its dangers, and reports about the low amounts of taxes he has paid in the past may have put additional pressure on President Trump, who is lagging behind in the opinion polls.

All this may explain why the derivatives markets are pricing in a very restless and volatile November. It may also explain some of the recent political maneuvers, which have again been astonishing, as they involved the White House directly interfering in the affairs of individual companies. And the many U-turns, delays and judicial stops to the bans on Chinese Internet platforms appear to show the haste in which some important decisions are being made. This does little to encourage planning and economic growth.

The same applies to politics on the other side of the Atlantic. Boris Johnson, the UK prime minister, is risking his country's credibility by distancing himself within a year from parts of a contract that he himself signed. If a follow-up treaty between the EU and the UK is finally concluded, it is likely to resemble a patchwork full of declarations of intent, simply because of a lack of time. This is highly unsatisfactory for the UK economy. The persistent uncertainty of the past five years has already left a clearly negative mark on it, as well as on the stock market and the pound. The EU itself, meanwhile, is not free of political problems, as Poland and Hungary's resistance to the conditions of the Covid-19 rescue fund has recently shown. If disbursements are delayed as a result, there is likely to be a negative impact on economic growth.

The pandemic also kept the world on its toes in September. A sharp rise in new infections, particularly in Europe, more than 30 million positive test results worldwide and more than one million deaths in connection with Covid-19 show that the virus's impact is pervasive. New socio-economic restrictions in the run-up to the northern hemisphere winter are the latest bad news, counterbalanced by more positive news about vaccines, rapid tests and more effective treatments. But it is plain to see that Covid-19 is far from beaten and the size of its second wave is unpredictable.

In addition, central-bank policy in large parts of the world is set to remain extreme, as is clear from the intention of the U.S. Federal Reserve (Fed) not to raise interest rates before 2023. Despite some signs of recovery, the economy is also still showing signs of extreme distress – for example, in the constant announcements of mass layoffs. And air traffic is another indicator of the degree to which previously normal activity is being restricted: passenger kilometers covered in August were down by 75% on the previous year.[1] The trade body has revised its full-year forecast downward at the end of the month.

Overall, markets took the mixed and sometimes outright bad news negatively. The MSCI AC World Index lost 3.2% in the month. And some of the previous technology high-flyers fell back toward earth, though they were able to recover some altitude at the end of the month. There are several possible reasons for the market correction. The rally since the spring plunge, especially in the S&P 500, is one of the most rapid in history and, in our opinion, drove valuations to dizzying heights. The new lockdown measures as well as an economic upswing that shows signs of losing momentum is another factor. The historically unique uncertainty about the execution of a possible change of power in Washington is a further major concern. We believe the strongest drivers of the markets, however, are monetary and fiscal aid packages. But there is a sense at present that fiscal remedies may disappoint while the Fed has already put all its cards on the table, and has nothing fresh to make markets happy, at least for now.

We would expect market developments in October to be a tense "wait-and-see". The still above-average volatility on the American and European stock markets shows the high degree of nervousness. Given the uncertainty about the U.S. elections, new stimulus packages, Covid-19 developments and the progress in economic recovery and threat of renewed slowdown, the risk-reward profile does not appear particularly attractive from a tactical point of view – especially in view of the currently high valuations on the capital markets.

We expect bonds to move sideways for the most part, without any major new impetus in October. This means that our view of government bonds is largely neutral. Positive exceptions would be 10-year Treasuries, emerging-market government bonds and bonds on the European peripheral countries. By contrast, corporate bonds have been downgraded. After a strong run despite high supply, we no longer consider the risk-reward profile of U.S. investment-grade corporate bonds to be balanced and have reduced the outlook to negative. We are also cutting our rating for emerging-market corporate bonds from positive to neutral, partly because these securities are particularly sensitive to the evolution of Covid-19. Concerns about the sustainability of economic recovery could become particularly evident in these securities.

We think that the short-term risks are not sufficiently priced in at the current index levels. Our sector and country preferences are unchanged from the previous month. This means that we continue to focus strongly on growth and quality in our stock selection. Despite the sharp setback in September, growth stocks were once again able to prevail over value stocks. For cyclical value stocks to hold their ground more sustainably, we believe that confidence in the momentum of the upswing should increase – ideally, of course, on justifiable grounds. This would be reflected in broad-based increases in earnings forecasts, which have so far largely failed to materialize, despite some media reports giving a different impression. A further indication of greater investor confidence would be if U.S. bond yields were to begin to rise in anticipation of stronger growth. A rise in the ten-year U.S. Treasury yield over the one-percent mark might be a good signal of that.

We have reduced our tactical assessment for both gold and commodities as a whole from positive to neutral. While production on oil globally remains flat, the demand recovery has been slow as the global economic recovery continues to face headwind from more Covid-19 cases. Given the current dynamic, we expect oil prices to remain range bound. Aside, we have downgraded gold to neutral as we do not expect any more weakening of the dollar and also real yields not to move lower.

Although the multi-asset team has recently increased its risk appetite somewhat, it has been paying close attention to the current volatility in the equity markets. This means first and foremost that riskier positions in the portfolio are to be expanded in the medium term. But at the same time attention is being paid to market fluctuations and the team is waiting for market setbacks before making its entry.

The current fundamental environment and also some technical factors are not the reason for our slightly more aggressive positioning, but rather the prospects for a revaluation of risk asset classes such as equities and corporate bonds. This could happen in response to the sustained low interest-rate environment and the strong fiscal stimulus that is likely to emanate from many countries. We also believe that there are still many institutional investors who have not yet revised the defensive positioning they adopted in the spring and who may therefore shift into equities. From a portfolio perspective the high correlation between asset classes that are currently very popular with institutional investors is a difficulty. These assets include technology stocks, gold and corporate bonds. This makes diversification harder to achieve; partly, too, because the dollar itself is behaving atypically, as it displays softness when we had expected strength.

We supplement our high weighting in high quality, growth and momentum stocks with selected asset classes, for example from the insurance and automotive sectors. Regionally we continue to prefer the United States, Asian emerging markets and Switzerland. We are also looking to see which companies should benefit most from a return to a more normal capex cycle.

In our opinion there is little in favor of government bonds at present, except as hedging against the residual risk that the pandemic will worsen. From a relative perspective we prefer U.S. securities. We expect little movement in real yields. Corporate bonds from the Eurozone remain our favorites, with euro high-yield bonds now also being included. By contrast, we are currently somewhat more skeptical about emerging markets. On the currency side, we do not have any pronounced preferences at present, other than a slight overweight in yen, but we still view the dollar somewhat more cautiously given the approach of the U.S. elections. 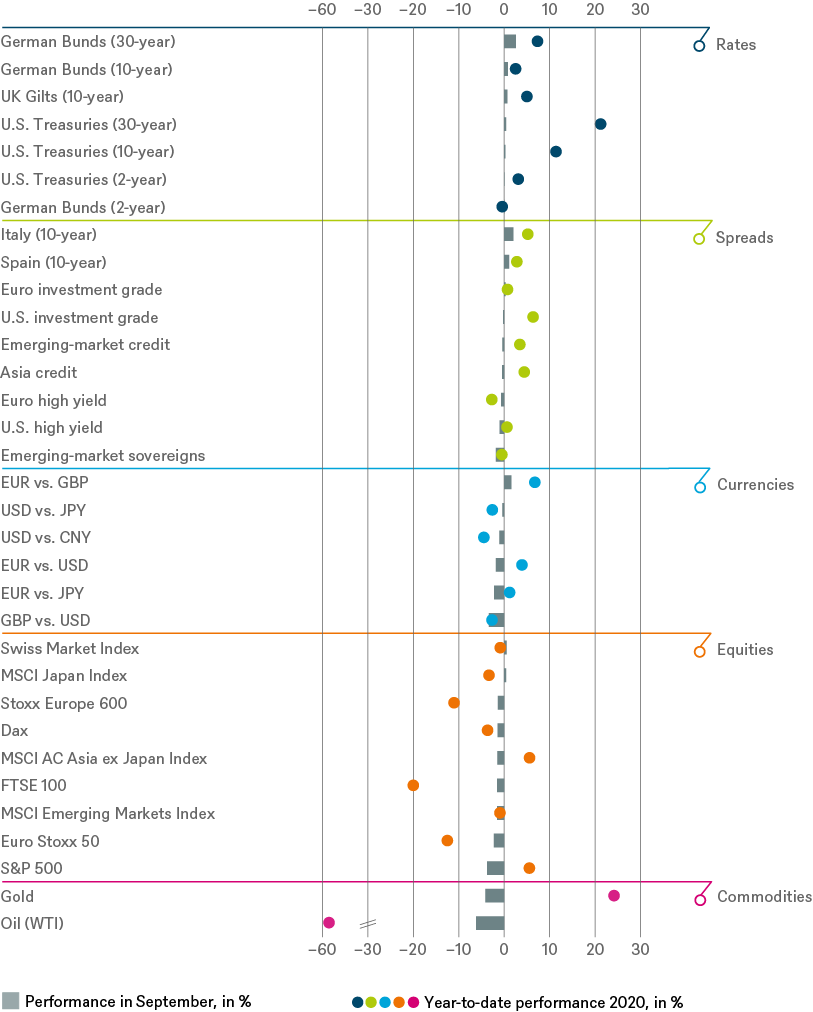 Past performance is not indicative of future returns.
Sources: Bloomberg Finance L.P., DWS Investment GmbH as of 9/30/20


Sources: Bloomberg Finance L.P., DWS Investment GmbH as of 10/1/20
Past performance is not indicative of future returns. Forecasts are based on assumptions, estimates, opinions and hypothetical models that may prove to be incorrect.