The approach of the U.S. election shaped October and its outcome will likely heavily influence not only November but also coming years. We will discuss the prospects in more detail in the outlook section. For now we note that the Republicans have done better than expected by market participants and that Washington now looks at a stalemate rather than ready for a fresh departure.

Even without the election campaign, October was not short of significant developments. First and foremost, of course, the second wave of Covid spread fast, especially in Europe, where towards the end of the month most countries introduced a more or less strong form of lockdown. The United States also set records for new infections, and passed a highly regrettable 1,000-Covid-related-deaths a day hurdle. Donald Trump recovered very rapidly from his Covid infection and resumed his campaign activities quickly. There has been both positive and negative news on vaccines, with their release into the market now expected in the first half of 2021. But broad national rollouts are expected to take more than a year, so improved availability of testing and tracing is the best hope for now.

October's economic surprises were mostly positive. Many third-quarter gross-domestic-product (GDP) figures were better than expected, which shows how well many countries have succeeded in resuming economic growth following the spring lockdowns. As expected, China's figures were the most impressive, and GDP growth of over 2% for the current year now seems possible. Purchasing Managers' Indices (PMIs) around the globe also painted a positive picture, even as some had been compiled after the first lockdown announcements were made this autumn. October was also marked by heavy quarterly reporting. U.S. technology companies in particular achieved very strong figures. However, this was not always rewarded by the stock market, as the outlook repeatedly pointed to a significant slowdown in the pace of recovery.

In general, October put a considerable damper on capital markets, although this must be set against the background of the previous rally. Due to a very weak final week of October, shares recorded their worst monthly performance since March, and a sharp increase in volatility. Europe's stock markets were particularly weak, with Germany's Dax down by 9.4%. U.S. stock markets fell by just over 2%, while Asian markets proved robust. The Hang Seng Index, for example, rose by 2.8%. On the other hand, in contrast to the United States, bonds in Europe rose, not least because the European Central Bank (ECB) gave clear indications of more extensive support in December, pushing bond yields down. Among commodities, the 11% drop in the price of West-Texas-Intermediate (WTI) oil was particularly striking. This reflected a gloomier outlook for economic growth as lockdowns made an unwelcome comeback.

An eventful October, in which stock markets first rose and then plummeted, has provided enough grounds for adjustments in positioning in some individual asset classes. Then came the small matter of the U.S. election. At the time of writing, from what we observe, we are assuming that Biden will win the presidency and that there will be a Republican majority in the Senate.

We would stress, however, that initial market movements should not be over-interpreted. After all, it is difficult to determine which election outcome the market had priced in, when and with what probability. But what seems most likely now after the close election is not a clear new beginning but rather a relatively muted transition. This reduces the chances of a more comprehensive stimulus package but, from investors' perspective, it also reduces the risk of a dramatic change in economic policy. And if fiscal policy is set to be less active than some hoped, the U.S. Federal Reserve (Fed) may find itself forced to provide additional impetus. In our opinion, the immediate positive reaction of U.S. stock markets after the start of the count, when a potential Democratic Blue wave began to be unlikely, may have indicated how important it is to investors that Trump's tax regime and deregulation stay broadly in place. But it could be months before investors get a concrete idea of the new administration's priorities. It therefore might make sense to hold fire on some investment decisions until there is greater clarity about the United States' political direction in the next four years. There may well be scope for some repositioning in November.

In our opinion, the outlook for bonds is unlikely to change much as a result of the redrawing of the U.S. political picture. Central banks remain strongly supportive and should continue to guarantee a low interest-rate environment for the time being. Thus, possible price fluctuations in the wake of the election could create interesting opportunities. This is particularly true for corporate bonds in the high-yield segment in Europe and the United States, and also in selected emerging markets. The election does little to change our assessment of 10-year Treasuries, whose yields we expect to remain below 1%.

We expect the euro/dollar currency pair to remain volatile, but maintain our view that the dollar will tend to become slightly stronger.

Without taking a view on the outcome of the elections, we raised our assessment for emerging markets to positive in the course of the month. In Asia in particular better handling of the pandemic is providing markets a head start over many other regions in terms of economic recovery. We believe it is premature to make any concrete repositioning within sectors as a result of the election outcome, even if the fact that the Democrats will probably not be able to govern alone will tend to take some pressure off sectors such as energy, technology and health.

The election results look neutral so far for alternative investments such as non-listed real estate or infrastructure. However, we believe much will depend not only on the identity of the next president but also on his cabinet appointments. Even when elections have proven relatively smooth, this process usually takes a while.

The U.S. election has certainly not given us the certainty we had hoped for. But a flare up of market nerves might offer opportunities, as we continue to feel constructive about economic prospects. In the immediate aftermath of the election, however, the majority of investors appear eager to focus on the positive aspects of the outcome. From what we see, the election will most likely result in a divided government, with Biden as President and the Senate Republican. The absence of a debt-financed large stimulus package that the Democrats would have favored suggests there may be less upward pressure on U.S. bond yields than was perhaps feared. From a portfolio perspective, however, we think that the diversification offered especially by longer-dated government bonds continues to speak in their favor. Otherwise, our positioning continues to be geared toward a gradual improvement in the economy despite the current setback caused by the second wave of Covid. 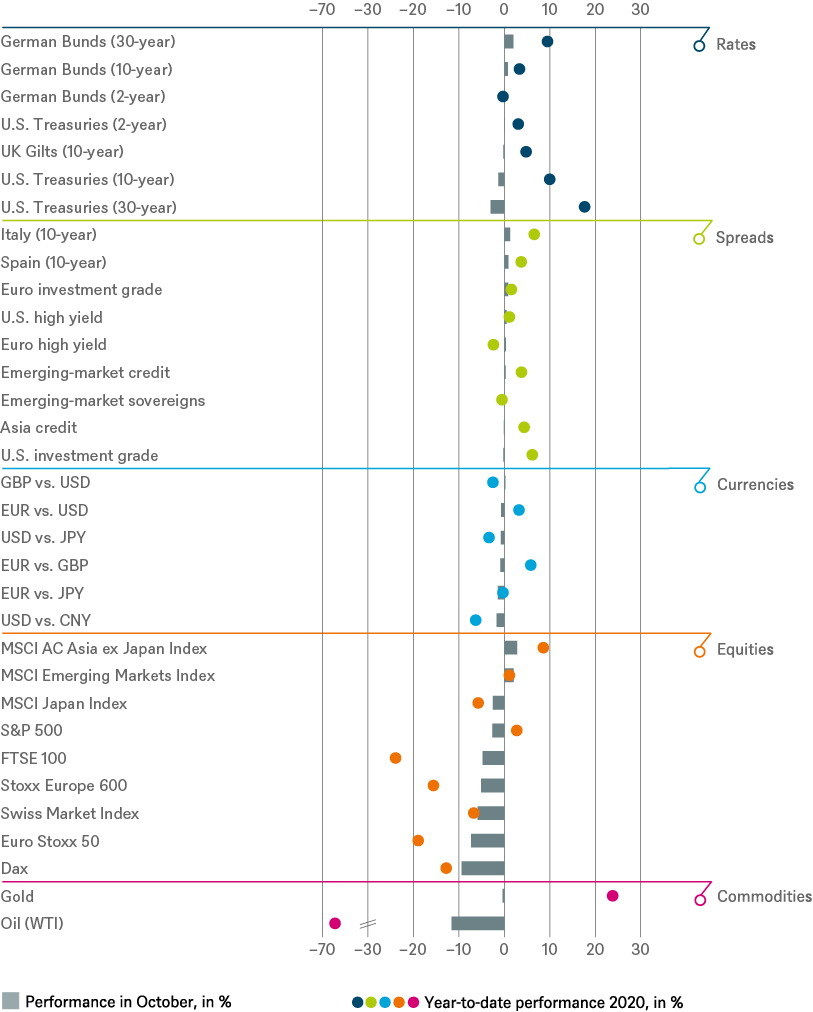 Past performance is not indicative of future returns.
Sources: Bloomberg Finance L.P., DWS Investment GmbH as of 10/31/20


Sources: Bloomberg Finance L.P., DWS Investment GmbH as of 11/5/20
Past performance is not indicative of future returns. Forecasts are based on assumptions, estimates, opinions and hypothetical models that may prove to be incorrect.

25 . Relative
to the Bloomberg Commodity Index