There are frightening parallels between January 2020 and January 2021. Both times the stock market proved relatively robust despite a preceding strong rally and a flood of negative headlines. In 2020 what followed was a collapse in markets in February. The question is whether the pattern might be repeated.

Of the headlines from early 2020 – Brexit, Trump's impeachment, yellow vests in France, unrest in Hong Kong, and some mysterious new virus in China – some are still relevant and one is having a pervasive global impact. While some may feel that progress has been modest, management of the pandemic has evolved significantly. Vaccines from half a dozen different providers will soon be available, and the treatment of Covid-19 has improved. No doubt, mutations of the virus are a reminder of its potential to surprise. But for now we concur with the majority view that the vaccination offense will provide significant relief in the second and third quarter of this year. Here, we like to look at developments in Israel, where more than half the population had already been vaccinated at the end of January, compared to 14% in the UK, nearly 10% in the United States and under 3% in Germany.

In addition to Covid-19, U.S. politics were the focus of investor interest at the beginning of the year. After surprisingly winning both Senate seats in Georgia on January 5, the Democrats were ultimately able to secure control of both chambers of Congress. Although the majority in the Senate is the narrowest imaginable, this development nevertheless fueled investors' belief that stimulus packages, as well as political decisions in general, could now be implemented more quickly. The market does not seem to be worried that this might mean tax increases, especially in corporate tax rates, this year still. It is assumed that tax increases will only take place following sustained stabilization of the economy (and the pandemic). Recovery and reflation of the economy has become the widespread expectation, expressed in the market in higher government-bond yields and inflation expectations. Joe Biden's assumption of office has also helped to bring sectors directly related to the environment and climate change into focus, as Biden wants to set clear priorities here.

Even though the major indices actually declined slightly in January (the MSCI AC World Index lost 0.4%), phenomena that might easily be grouped under the heading "typical signs of a bubble" accumulated in markets. Cryptocurrencies continued their rally, in some cases doubling their previous highs. A large number of IPOs, primarily of technology companies, posted high double-digit gains on their first day of trading. SPACs, shell companies that only gain an operating business after going public through a subsequent corporate acquisition, are entering the market at a rate never seen before. The trading volume for call options on stocks and stock indices in U.S. markets was three times higher in January than the average for the past decade. The Vix has been trading above 20 for about 11 months, the second longest period in its history. And, last but not least, there have been price leaps of 1,000% or more in stocks heavily shorted by hedge funds and bought by small shareholders who have combined their efforts through the online chat room WallStreetBets. Adding to that the term, "stock market bubble," has never been searched so often on the internet. The extent to which market imbalances are being created and the scale of the corrections in capital markets which may at some point follow has increasingly been preoccupying investors.[1]

The backdrop for our tactical asset-class outlook is complex: first, prices largely met our 12-month forecasts which we set out as recently as November; second, a head-to-head race between new aggressive Covid-19 mutations and the international vaccine roll-out; and third, softening economic data as a result of extended lockdowns.

The major change in fixed income took place in 10-year Treasury bonds which we now view negatively on a tactical basis: we believe the reflation euphoria will continue for some time even if the fiscal stimulus package may come later and be smaller than some might have hoped. This disappointment should already be priced in, while solid quarterly reporting and good progress in the vaccination process remain promising. The U.S. Federal Reserve (Fed) meanwhile has once again made clear it will not stand in the way of rising inflation. In Europe we remain negative on 10-year bunds but have increased Italian 10-year sovereigns back to positive as we believe markets have overreacted to political noise.

We stick to our positive view on euro and U.S. dollar corporate bonds (except for euro high yields) as we see continued demand but receding supply, especially in the United States. While we also remain constructive on Emerging-Market (EM) credit, we have reduced our overweight on EM sovereigns to neutral as we fear new lockdown measures and an expected spike in new issuance could weigh on prices.

In currencies we see the U.S. dollar gaining against the euro again, not least because the United States is making faster progress with its vaccination program.

Within equities we have made no changes. We still prefer EM and Asia, as well as the IT sector, and are still waiting before adding more cyclical exposure. U.S. and Asian equity markets have welcomed 2021 with new all-time highs, surpassing already several of our December 2021 targets. Optimism is being driven by the prospect of continued economic recovery, a likely U.S. fiscal stimulus of more than one trillion dollars, excess household savings and the promising signs from the pioneering vaccination campaign in Israel.

The equity valuations that have now emerged across virtually all metrics have become scary to many seasoned investors, who are being left to find an explanation for one bubble, in equities, by pointing to an even bigger bubble in bonds. Historically, valuations have never, however, been a good guide to short-term market direction – they have only mattered longer term. Here, if history is any guide, investors should not disregard the risk that current high multiples might put a lid on price appreciation or performance over the next 5 to 10 years. For the time being we remain constructive on equity markets as we struggle to identify the factor(s) that could eventually bring the show to an end. In relative terms, we stick to our IT overweight. High growth expectations have, so far, largely been met during the fourth-quarter reporting season, although investors seem disappointed by lackluster outlooks for some companies. Several of our investment traffic lights already focus on the cyclical re-opening theme: 1) we overweight EM; 2) prefer more economy-exposed European small caps to their large-cap peers; and 3) we opt for pro-cyclical sub-sector choices. These include an overweight in automotive within consumer discretionary, a preference for energy equipment vs oil pipelines, and a focus on commodity chemicals and mining within materials.

This leads us to alternatives. We have become more positive on commodities. We believe oil supply should remain well managed in the near term. Saudi Arabia's production cut should offset any decline in demand caused by the seasonal downturn and demand disruption from Covid-19 lockdowns. Oil producers remain very cautious in their capital spending programs. As for base metals, we believe market fundamentals remain supportive, but we continue to expect that price increases will take a break during the Chinese-New-Year period. Gold prices are likely to require a new catalyst in order to break out of their recent range, which is being driven by a slight firming in the U.S. dollar in January and in real interest rates. The silver price is currently being deliberately inflated by an unusual surge in demand from a group of U.S. retail investors co-operating via internet platforms. We expect a correction after the short-term excitement fades.

The overall portfolio risk appetite stays at a mild preference for the time being. While it is about continuing to earn risk premium in a reflationary environment, a rather "boring" and "middle of the road" type of balanced equity allocation is an expression of lower conviction at the moment. While we believe this environment and stretched valuations call for building up some hedges, the current market momentum still seems to have some breath. We may revisit this judgement if the 10-year U.S. Treasury yield heads north of 1.25%. 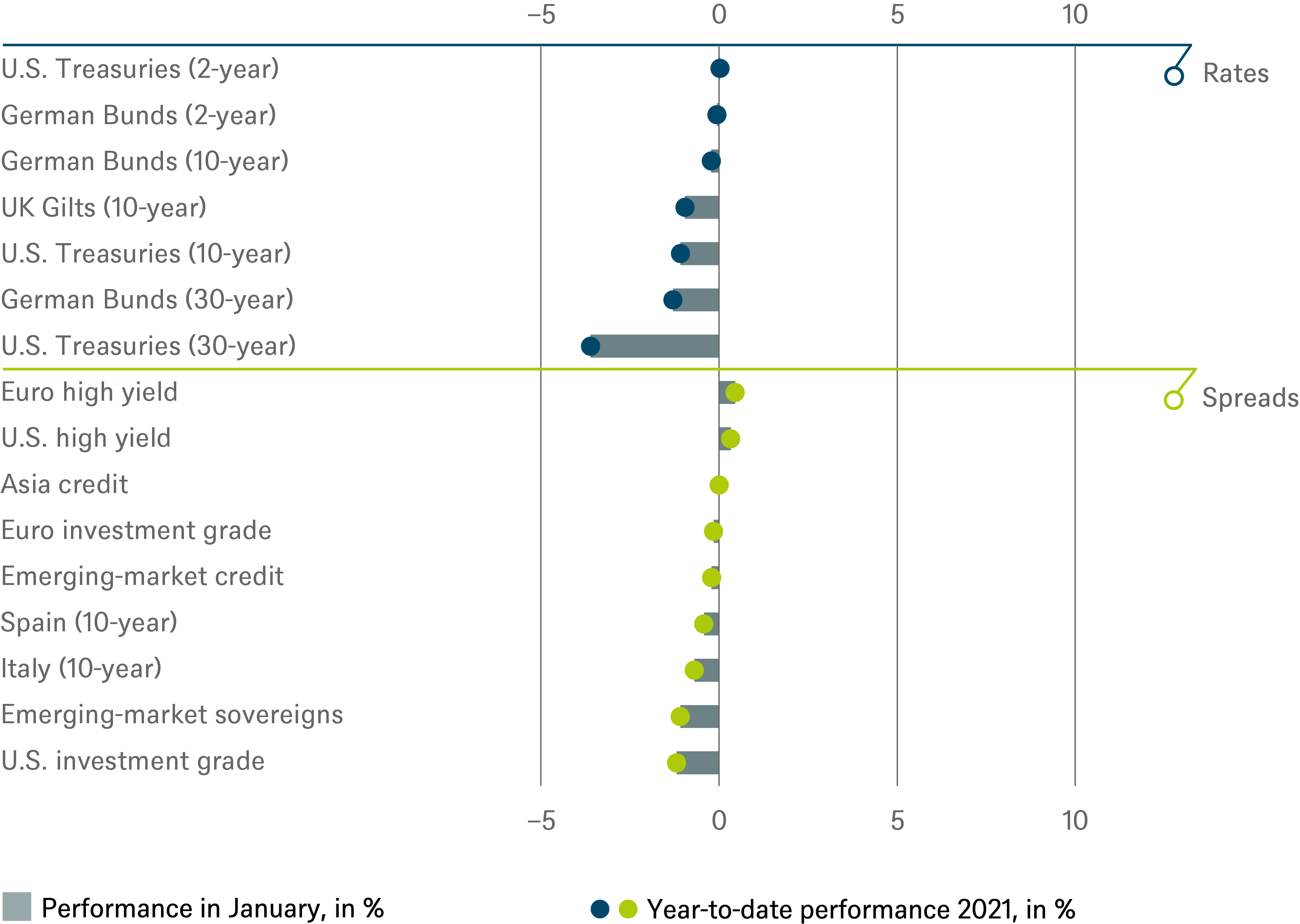 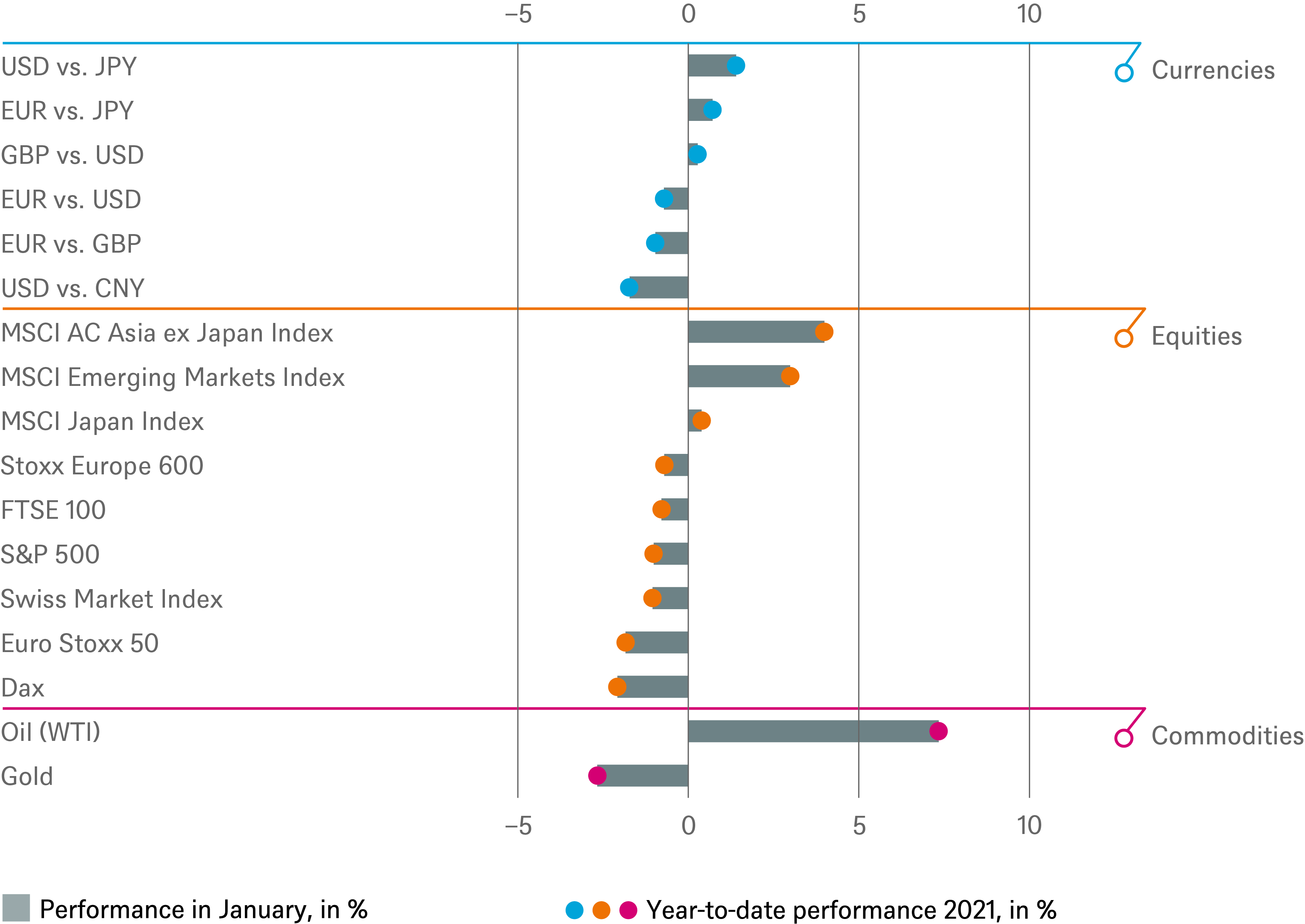 Past performance is not indicative of future returns.
Sources: Bloomberg Finance L.P., DWS Investment GmbH as of 1/31/21

This information is subject to change at any time, based upon economic, market and other considerations and should not be construed as a recommendation. Past performance is not indicative of future returns. Forecasts are based on assumptions, estimates, opinions and hypothetical models that may prove to be incorrect.DWS Investment GmbH as of 02/02/21
080522_2 (02/2021)