Upgrading our forecasts for the U.S. economy

With other political obstacles out of the way, we now expect the U.S. Senate to quickly move on to the most important topic of the hour: another round of fiscal stimulus. "Quickly" should be taken with some caution, however. The Democrats aim to push the legislation through Congress via budget reconciliation – rather than a bipartisan approach that would require a large degree of ex-ante consensus, as a 60-vote supermajority is needed to end the Senate filibuster. To cut a long story short, the use of reconciliation formalizes the process of political consensus-forming. The fiscal package must be debated in almost every House and Senate committee in order to come up with a so called omnibus bill that eventually then is voted on in both houses. A political maneuver called "vote-a-rama", where an endless series of amendments are tabled, could delay the passage of the bill. Given what is being voted on – politically very popular fiscal support for the economy – we are optimistic that the bill will be signed into law by President Biden before much needed initiatives like extended unemployment benefits run out in mid-March. The question remains what the total amount of money involved will be. President Biden's proposed 1.9 trillion U.S. dollars (USD) still looks unlikely to survive entirely. But we expect that demand stimulus and politically attractive elements such as one-time payments, extended unemployment benefits, tax support for families and money for the health sector and pandemic response, will be in the package.

In our last U.S. economic outlook we argued that another large-scale fiscal stimulus should boost demand sustainably once the pandemic is fairly well under control and people again feel comfortable engaging in a wider range of activities. The ongoing large-scale distribution of vaccines promises this will soon be the case. For now, retail sales for January provide us with a striking preview of what might happen later in the year. Consumer spending, weak in November and December 2020, jumped as the second round of one-time payments and extended unemployment benefits arrived. In a textbook example, pent-up demand was unleashed on, among other things, furniture and electronics, (which jumped by 12% month-on-month) as consumers probably made up for missed year-end 2020 shopping. Easing virus-related restrictions have offered a welcome opportunity to spend money as well. Department store sales (+23.5% month-on-month) and eating and drinking (+6.9% month-on-month) enjoyed an impressive resurrection. Overall, retail sales in January were above the pre-pandemic level in February 2020 by about 7.8%. Obviously this trend is unlikely to be lasting, especially as bad weather will add to the pandemic-related downward pressure on consumption. But warmer climes and another round of 1,400 USD one-time payments may be just around the corner. 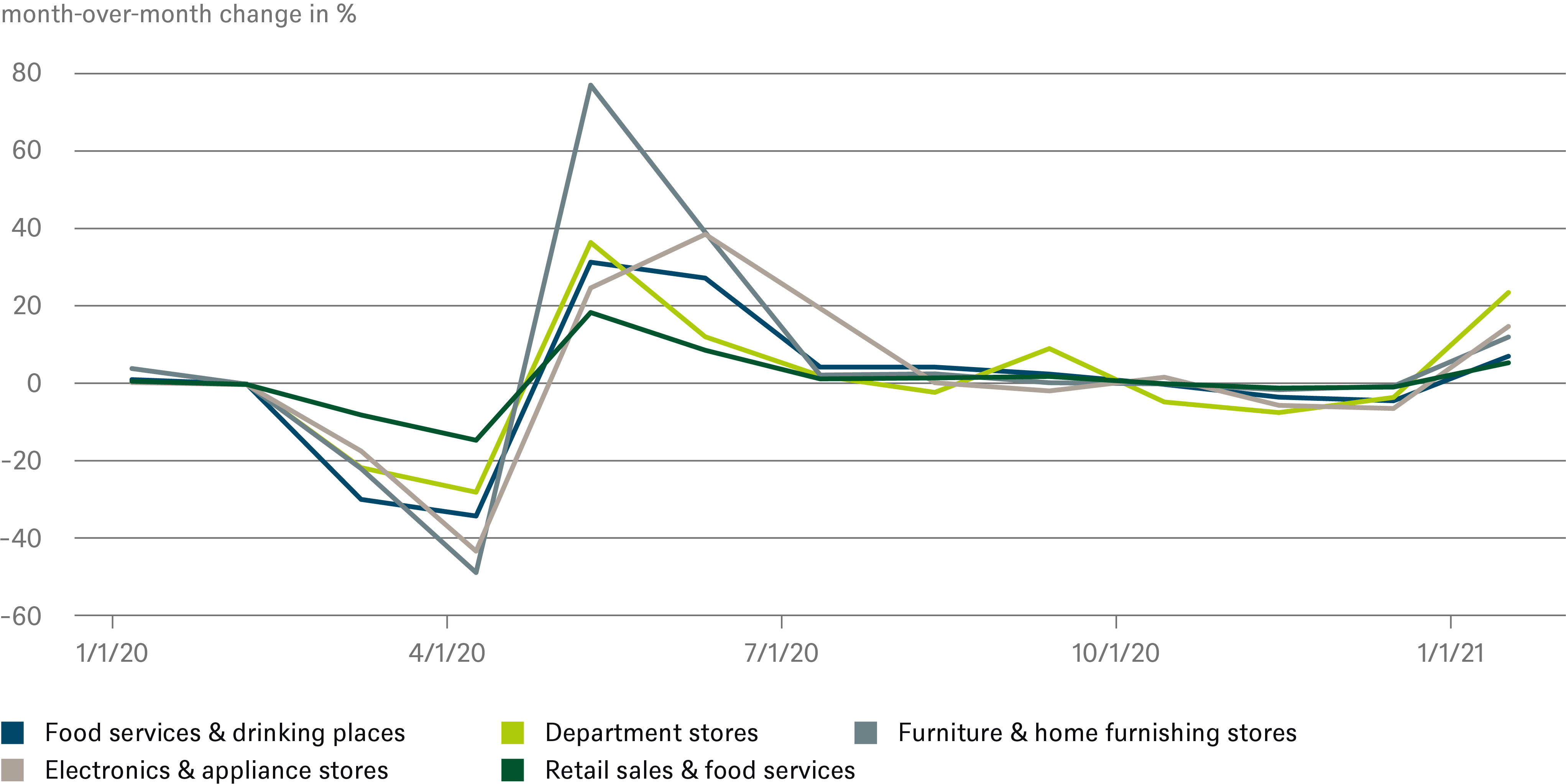 Given our expectation of another fiscal package to be passed by mid-March, we feel comfortable raising our forecast for the U.S. economy significantly. For 2021 we now expect a quarter-over-quarter growth rate of 4.7% (from 3.2% previously) and of 3.8% quarter-over-quarter for 2022 (from 2%). Increasing demand, given somewhat pandemic-related limited capacities, comes on the back of somewhat higher inflation expectations. We expect core prices for the Personal Consumption Expenditures Price index (the core PCE) to gradually increase toward 2% year-on-year by the end of 2021 and to 2.2% year-on-year by the end of 2022. This inflation call does not come without a word of caution – especially for 2021. We expect base effects, resulting from the slump in prices in April/March 2020, to temporarily push inflation beyond the 2% threshold in the same months this year. But this should not have immediate consequences for monetary policy as the U.S. Federal Reserve (Fed) remains in emergency mode and has set out very clearly that it intends to look through temporary inflation increases.

The updated January post-meeting statement sends a clear message: the economic outlook "…will depend significantly on the course of the virus, including progress on vaccinations."[1] Later, in the press-conference, Fed Chair Jerome Powell specified that risks surrounding the roll-out of vaccines, arrival of new strains and the spread of the virus are "ongoing."[2] Understandably, as long as these risks remain, the Fed will maintain its accommodative stance and stand ready to act by adjusting "the stance of monetary policy as appropriate" as the usual mantra goes. Therefore, no expected change in monetary policy in the short term. But what about the medium term? Once temporary effects in inflation ease in the late second quarter of 2021, we expect that increased demand should gently push inflation higher toward 2% as supply still remains limited. Increasing demand, however, might also support the labor-market recovery, which in turn, should again push up prices.

We observe that high-ranking Fed officials like Chair Jerome Powell, Vice Chair Richard Clarida and Governor Lael Brainard have recently spent quite some time explaining to their audience how they assess the new policy framework. Two of them, Powell and Brainard, with a special focus on labor-market developments.[3] Summing up their remarks, most likely the following conditions must be met for the Fed to be willing to raise policy rates:

The main guidance on their current assessment of how the economy will evolve is the latest vintage of their Summary of Economic Projections, updated most recently in December 2020.[6] Those projections suggest, broadly speaking, that a lift off in policy rates, given the two conditions, might take place somewhere beyond 2023. However, it seems that the December projections do not account for another round of fiscal spending yet. In the minutes of the January Fed FOMC meeting, participants now remarked "… that the prospect of an effective vaccine program, the recently enacted fiscal support, and the potential for additional fiscal actions had led them to judge that the medium-term outlook had improved."[7] For us this is a clear indication that one of the next updates of their Summary of Economic Projections should show an upgrade to the economic outlook – provided the risks to the outlook do not materialize. This upgrade will most likely bring the Fed’s economic assessment closer to what we expect right now. While this does not yet imply any changes to policy rates over the next 24 months, it probably does have implications for another important monetary policy tool: the pace of Large Scale Asset Purchases (LSAP)[8].

Several times the Fed has issued guidance to suggest that those purchases, at least at the current rate, will continue until "substantial further progress" toward their two objectives can be seen. We think "substantial further progress" will most likely be evident toward the end of 2021 and early 2022, around the time when inflation might sustainably approach 2% – condition number one. An ongoing labor-market recovery and somewhat elevated inflation, however, might not be the sole reasons for the Fed to consider tapering its LSAP. Again the minutes from the January FOMC meeting are quite revealing: "Participants noted that overall financial conditions remain highly accommodative" while staffers described "asset valuation pressures as elevated." Admittedly these lines are soft indicators rather than hard evidence of Fed thinking but the fine lines are sometimes the most interesting when watching the Fed. Especially, as they might still have in mind previous episodes of policy normalization and the massive market reaction policy changes can provoke. We expect the Fed to put on their softest velvet gloves, reducing asset purchases only very gradually and with ample communication.

Overall, however, we retain a cautiously optimistic view. Walking away from this crisis will not be as easy as a stroll along the beach. Rather it will be a walk along a crowded city street, with hazards to watch out for. But even that kind of walk is one we are all looking forward to, once the vaccines have done their work.

8 . It is a monetary policy tool whereby U.S. Treasuries and MBS are bought in order to drive down long-term interest rates.

The U.S. real-estate sector looks set to get a boost from strongly improving demand at a time of still somewhat constrained supply. Not all sub segments are likely to benefit equally, though.
May 04, 2021 Global

What will happen to central-bank purchases and currencies as the Covid crisis recedes? Canada offers some early clues.
See all articles