For the most part, the European real estate market is still in good shape in 2019. However, investors seem to place more weight on the risks than they did in 2018. International trade tensions, simmering Brexit issues and political problems such as those in Italy all breed uncertainty. Furthermore, following a six-year recovery, there are now clear signs of an economic slowdown. The European economy has already lost momentum, while business and consumer confidence has fallen. DWS experts nonetheless consider a recession to be unlikely.

European commercial real estate returns are set to moderate in the coming years, but there are many reasons to remain invested.

Despite many indications that the pace of economic growth has slowed, investors continue to favour the real estate sector, not least because the state of the economy is just one factor affecting the decision to invest. Growth and the attendant real estate economic cycle often have a significantly different trajectory in individual countries and cities. Investors also tend to hold real estate over more than one cycle.

Expected real estate sector returns may be trending downwards, but this should not cause significant corrections in real estate prices.

“This is primarily due to the robust commercial rental market, which has rarely been so solid,” explains DWS real estate expert Matthias Naumann.

Rents have risen significantly. This is due to a combination of rising office worker numbers across Europe – rises have been stronger than on average since the end of the financial crisis – and  subdued construction activity. Rent increases in the coming years are also expected to remain above inflation.

“Because of this, vacancy rates in major European cities are generally low, which should stimulate further rent rises,” Naumann says.

In light of this, DWS experts have revised their five-year forecast upwards for around two-thirds of the European markets they analyse. The greatest rental increases are still expected in Madrid and Berlin. The central business district in Paris also comes out well, with an average vacancy rate of less than two per cent. By contrast, ongoing uncertainties surrounding Brexit may well impact the central London market and lead to a further correction in overall rental values.

When it comes to individual industries, it is worth taking a closer look at the logistics sector.

“This sector, which is booming due to online trade, is particularly buoyant, with rental growth significantly above levels seen in the past,” says DWS real estate expert Martin Lippmann.

Logistics site use reached an all-time high across Europe recently and facilities under construction more than doubled in the past three years to over 16 million square metres.

In many parts of Europe, demand for logistics real estate continues to exceed supply, causing the average vacancy rate to fall to 4.1 per cent, with further decreases expected. With space for rent in short supply in many markets, rents for top-quality properties are rising by an average of two per cent per annum.

The flip side of this is the downward trend in stationary retail premises.  Development of new sites for shopping centres fell to 1.6 million square metres in 2018 – just half the average in the last 20 years. Demand is expected to fall further in 2019, with vacancy rates increasing. In light of this, the DWS experts have adjusted their forecast rental growth downwards for the next five years and now expect only a 1.2 percent annual increase for even the best shopping centres.

It is true that overall European real estate transaction volumes fell by 15 per cent in 2018, following a record 2017. Flows to real estate funds also continued to dip in the second half of 2018.

However, there are good reasons why the real estate investment market should remain robust in 2019. Demand for property, particularly in the logistics and residential sectors, should persist. Financing terms remain favourable, and closed-ended funds have considerable liquid assets targeted at European real estate. However, the most important reason is that real estate returns are still more attractive than those in other asset classes.

It’s true that this would represent a considerable decrease on returns over the past five years. However, with fixed-income investments such as ten-year German government bonds yielding only 0.3 per cent, real estate investments remain an attractive alternative.

Although real estate market segments in some major European cities have already grown well, the potential in other areas is far from exhausted. It is essential to look closely at each location. 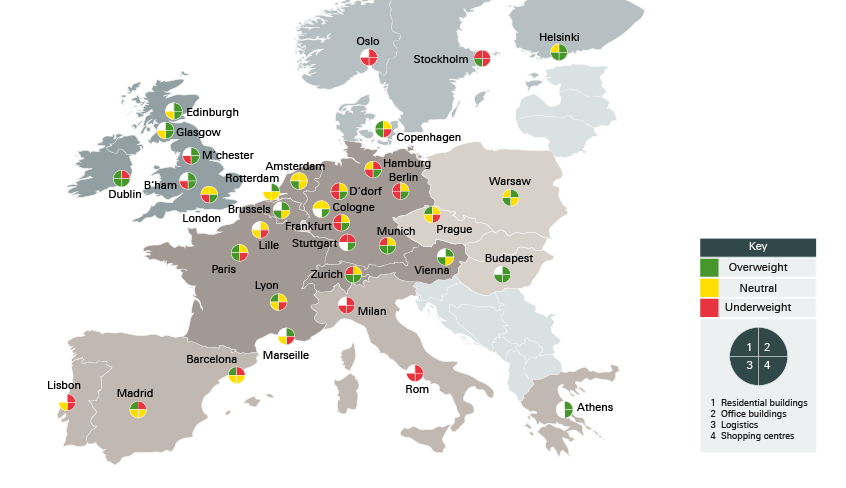 Although returns in many areas of the European real estate market are expected to reduce, some sectors and locations continue to show dynamic growth – for example, the logistics industry and business districts in Paris, Madrid and Berlin. They are expected to deliver above-average returns in 2019.

Study: Prospects for equity investors not tarnished by Covid-19

In defiance of all gloomy news, the earnings prospects of equities should remain intact for long-term investors even in the world after Covid-19 – this is the gist of a study published by the DWS Research Institute.