China has other worries than U.S. Treasuries

Concerns that Beijing could use its U.S. government-bond holdings to influence U.S. interest and exchange rates appear to be overdone.

The ongoing trade dispute between the United States and China not only calls into question global supply chains, but also economic certainties. While many have now understood that domestic consumers must pay import duties first and foremost, on other issues even professionals have dissenting views. For example, the question of whether China could use its U.S. government-bond holdings as a weapon and what consequences this would have. The focus here is above all on the alleged effects on U.S. interest rates and the dollar-yuan exchange rate.

First, consider China's perceived dominance in the U.S. government-bond market: Of the outstanding Treasury bonds amounting to 17.6 trillion dollars, China holds 1.1 trillion dollars, which corresponds to a share of 6.4%. At its peak, in July 2011, it was 12.1%. While the Federal Reserve (Fed) initially plugged the gap, it is now the U.S. private sector that is taking up the steadily growing bond supply. What about interest and exchange rates? As our "Chart of the Week" shows, Beijing's massive Treasury purchases coincided with a yuan appreciation. And since Beijing has also reduced its position in absolute terms, the yuan has tended to weaken. Ceteris paribus, one would have expected the opposite. But as Xueming Song, DWS economist for China, explains: "Treasury purchases should not be viewed in isolation. They were first preceded by China's massive trade surpluses, which strengthened the yuan. At the same time, foreign companies have invested in China, which also pushes towards an appreciation of the yuan." And the interest rate? Would it skyrocket if Beijing continued to sell? Here, too, history contradicts this thesis. When China increased its holdings eightfold to 0.8 trillion dollars between 2002 and 2008, the interest rate on 10-year Treasuries continued to rise. And for almost a year now, both Beijing's holdings (slightly) and interest rates have been falling.

But does Beijing have any interest at all in a yuan devaluation? Although this would help the export industry, Xueming Song objects: "There are various reasons why Beijing is unlikely to wish for a weaker currency. From a possible flight of capital as is happened in 2015 to the Belt and Road and the Shanghai Cooperation initiatives, in which China has to lure foreign countries with a strong currency. Moreover, China's self-image as a challenger to the U.S. and as a home country of a serious world currency is not compatible with a weak yuan." China's rulers can probably be accused of many things, but the list would not appear to include artificially holding down their country's currency. 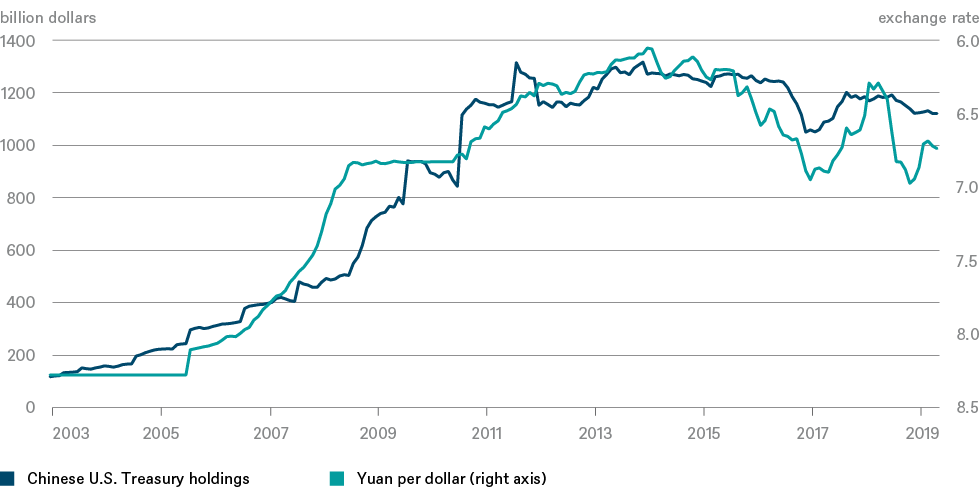