A Washington punchline, no more?

For spending on U.S. infrastructure, the 2020 elections could mark a fairly decisive turning point.

Head of Infrastructure
to read

Under Joe Biden, the next administration is likely to bring a fresh focus to the energy transition and fostering renewable sources.

When it comes to U.S. politics, plenty remains uncertain. One area, where the 2020 elections look likely to mark a fairly decisive turning point concerns spending on U.S. infrastructure. Of course, hopes for bipartisan cooperation on infrastructure have failed to come to fruition before. In recent years, the very term "Infrastructure Week" became something of a long-running joke among Washington insiders.[1] Still, we are cautiously optimistic that things might be different in the next four years.

Most obviously, the world's leading economy may now support decarbonization, by re-joining the Paris agreement on climate change.[2] Under President-elect Joe Biden, the next administration is likely to bring a fresh focus to the energy transition and fostering renewable sources. As a result, we would expect more investment in grids, battery storage, and a stronger promotion of transport electrification. Attempts to reduce emissions, and support a nascent low-carbon economy will probably start in early 2021, in so far as they concern regulatory actions. However, most will only unfold over the medium term.

Already, there are strong underlying economic forces pushing towards decarbonization, such as electricity renewables reaching grid parity. Somewhat independently from policy-making, transport electrification has also continued to proceed during the Trump presidency, with the spread of recharging stations for electric vehicles. In our view, policy alignment at the federal level is likely to reinforce these trends.

That said, the barbed exchanges concerning oil and gas exploration during the final weeks of the presidential campaign serve as a reminder that the new administration may need to tread carefully. Fossil fuels in general and shale in particular remain important economic engines in key battleground states, as well as for the U.S. economy as a whole. Existing infrastructure remains pivotal in supporting the energy transition process over the coming years, in particular the role of gas. However, the bulk of the flow of new capital may gradually transition towards a greener infrastructure platform.

The picture is likely to be similarly nuanced in other areas, reflecting the interplay of economic and political considerations at state, local and national levels. For example, private capital is already flowing based on digitalization trends, with investment in fiber cables, datacenters and 5G mobile networks. Demand for connectivity and data volumes continues to accelerate, supporting the outlook for investment in fiber and datacenters. However, the private sector can only proceed on its own where the economics add up. For new investments, this still often means relatively dense, as well as wealthy parts of the country. As a result, rural broadband has emerged as a key topic in plenty of Congressional and Senate races. The Biden administration might be well advised to reach out to Republicans in Congress and at the state level, who ran on promises of making rural broadband a priority.

More traditional infrastructure, particularly transportation, roads, bridges, airports and water networks, already saw a strong push to accelerate spending during the outgoing administration, as part of President Trump's "Rebuild America" agenda. An area of focus at the state and local level has been social infrastructure, which can be broadly defined as the construction and maintenance of facilities that serve as the backbone for communities and societies. Examples include hospitals, education, from schools to universities, and public facilities, such as community housing and prisons.

As we previously explored in detail, much of that infrastructure remains in desperate need for maintenance, after decades of underinvestment.[3] According to the American Society of Civil Engineers, U.S. transportation and social infrastructure currently see a 2 trillion dollar investment gap over the next decade; low public investment has led to deferred maintenance, with the conditions of U.S. infrastructure being "mostly below standard."[4]

To put this in perspective, infrastructure equity transactions worth some 53 billion dollars have reached financial close by end of November in 2020, showing resilience despite Covid-19.[5] Historically, the energy sector has represented the largest share of both projects and capital flow, with most transactions closing in the midstream[6], liquefied natural gas, power, utilities and renewables sectors.

The municipal-bond market, as a competitive source of funding, has limited the involvement of private capital in transportation and social infrastructure, particularly compared to other developed markets, such as Europe. However, transportation and social infrastructure are gradually maturing, following the removal of barriers to private capital. In recent years, all U.S. states have developed legal frameworks for Public Private Partnerships (PPPs), cooperative arrangements between two or more public and private sectors, typically of a long-term nature. Given the deep damage the pandemic has done to finances at the state and local level, we may well see an acceleration in PPPs in the 2020s.

Overall, we see a decent chance for sufficient cross-party support for infrastructure spending, not least as a way to support the economy and employment, in line with President-elect Biden's "Build Back Better" agenda. Once again, however, changes will take some time, and the final outcome of any bill will be subject to compromise and negotiations.

That brings us to one key remaining area of uncertainty. Control of the Senate is still in balance until the two January 5 run-off elections in Georgia. Control of the Senate is likely to be closely divided whatever the outcome. The results may matter less for the broad policy direction than the specific legislative details in how it gets implemented. In particular, that comes down to what measures or mix of measures, from tax credits, public capital or guarantees, will be used to boost infrastructure investments. Needless to say that it is precisely such specifics that we believe determine the economics of emerging opportunities and that we will be watching closely.

Historical infrastructure transactions in the United States by sector

Traditionally, the energy sector has represented the largest share of both projects and capital flow, while transportation and social infrastructure has been underdeveloped. 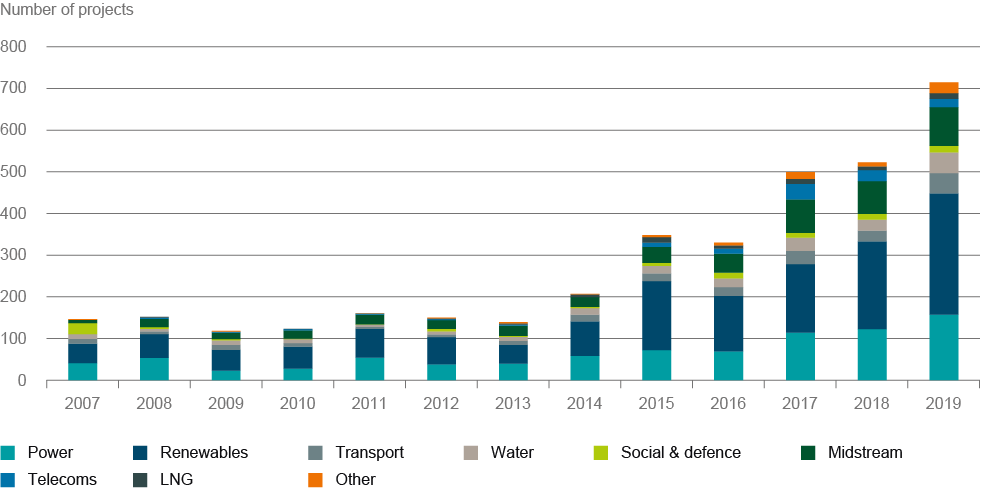 Source: Infrastructure Journal database as of 8/27/20

The results may matter less for the broad policy direction than the specific legislative details in how it gets implemented.

Infrastructure programs are economically necessary but often politically sensitive. President Biden may have hit the right time and tone and appears to be using rivalry with China as a lever.
Apr 07, 2021 Macro

The first quarter was propelled by rising growth expectations and bond yields, as well as by a rotation into cyclical stocks.
Apr 07, 2021 Equities

5 . Infrastructure Journal database as of 12/1/20, includes only equity transactions, excludes projects exposed to the upstream or downstream Oil&Gas sector

6 . Midstream is a term used to describe one of the three major stages of oil and gas industry operations. It includes the processing, storing, transporting and marketing of oil, natural gas, and natural gas liquids.