What will happen to all the "money"?

The ruling of the German Federal Constitutional Court on the expansion of the European Central Bank's (ECB's) balance sheet has given new impetus to an old question (see CIO Flash as of May 5, 2020). Does this seeming expansion of the money supply, which currently is mainly achieved through bond purchases by the Bundesbank and other national central banks of the Eurozone, bring a substantial risk of inflation?

Even self-styled non-monetarists have to admit that inflation is a monetary phenomenon. The money supply, multiplied by the speed of circulation, must correspond to the nominal value of all goods and services traded within a period of time. If the money supply increases while the velocity of the money in circulation and the quantity of goods and services stay constant, then the price level must rise – I.e. inflation must occur.

So far, so good. But what exactly is "money"? A moment of thought reveals that this question is far from trivial. As described above, inflation occurs when too much "money" chases too few goods and services. Goods and services can be paid for in cash, but also with a debit card, or even on credit. By contrast, saved money on a time-deposit account, which a saver continuously prolongs over years, is in this sense not part of the "money" immediately available for purchases. Similarly, physical cash holdings that are locked away in a private safe for years have effectively been withdrawn from circulation. By contrast, equity holdings someone accumulates to save for the planned purchase of a sports car for next year are not that dissimilar to money available for purchases in a year's time.

Such considerations are one reason why economists in the Eurozone still like to consider the broad money-supply aggregate M3. (Unlike more narrow measures, M3 includes everything mentioned above, except for equity holdings.)

Which brings us back to the original question, namely why the expansion of central-bank balance sheets will not necessarily lead to inflation. As shown in our "Chart of the Week," since 2009, the M3 money supply has not grown nearly as strongly as the ECB's balance sheet. In fact, M3 has stagnated for several years over the past decade, i.e. a lot of the liquidity provided by the ECB never actually found its way into the real economy. This also explains why the underlying inflation trend, measured by the core inflation rate, is roughly at the level it was at ten years ago. For this to change, we assume the broad monetary aggregate M3 would first have to start growing at rates similar to those of the ECB's balance sheet. 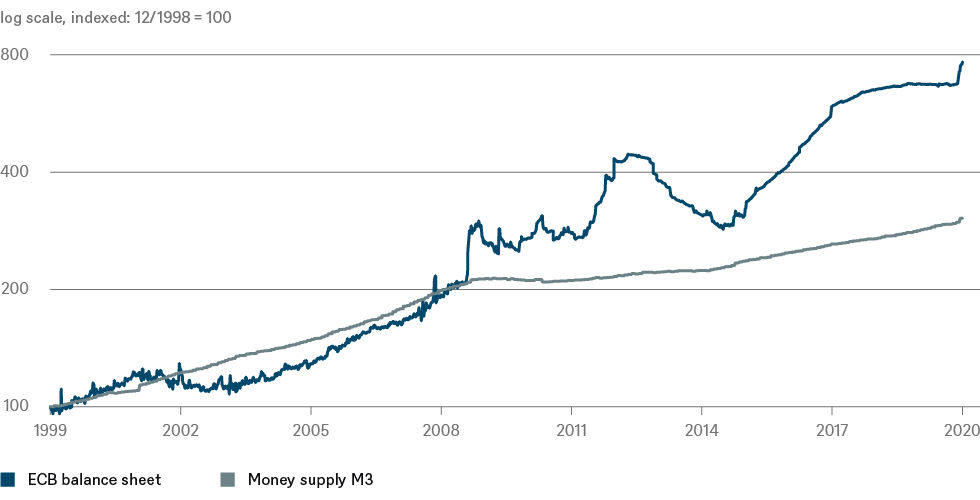 Once again, much fuss will be made around the earnings season; beats and misses will move individual share prices. Investors shouldn't worry too much in our view.
Jul 09, 2021 Trade

The charm of setting carbon prices at the border

Trying to reduce CO2 emissions by itself might prove difficult for the EU, not least as it could undermine its competitiveness. A carbon border tax could help.
Jun 01, 2021 ESG

Blue economy: A new twist in an old tragedy

Markets and policymakers are finally waking up to the challenges and opportunities of protecting marine ecosystems, while simultaneously promoting sustainable development.
Apr 01, 2021 Europe

Diminished expectations, if only in Europe

It is sadly foreseeable that economic growth in continental Europe will once again lag well behind other economies in 2021. That need not spell financial-market disaster.
Mar 12, 2021 Macro

Can the Fed still put the brakes on cryptocurrencies?

How much longer will central banks and regulators watch the rapid growth of cryptocurrencies? Measured against the U.S. money supply, they are already astonishingly large.
Jan 22, 2021 Europe

In recent weeks, mobility slowed down again across Europe. Overall, however, European transport-infrastructure returns have been remarkably resilient during the pandemic.
See all articles

You are now seeing the Luxembourg version of the page despite being located in USA. You can change the country below.