Back to the present and the near future. December brought a little more certainty on two major global issues. First the British voted for Boris Johnson, and thus for Brexit as quickly as possible. Second, the United States and China announced that they had essentially agreed on the key points of the "phase-one" deal. The trade agreement is due to be signed on January 15. The markets reacted quite positively, judging by the marked price gains. But maybe the year-end rally also reflected markets that had the momentum to grind higher based on stabilizing economic data and larger than expected monetary stimulus. We, however, are somewhat more skeptical about both the U.S.-China treaty and Brexit. Although the extreme risks (a further escalation of punitive trade tariffs or a no-deal Brexit) may have diminished, many risks remain. The concrete U.S.-China treaty may turn out to be much less solid than hoped for, and Boris Johnson's Brexit timeline may prove hopelessly overambitious.

Meanwhile the new European-Central-Bank (ECB) President Christine Lagarde hosted her first press conference in December. She made it clear that for the time being there would be no changes to monetary policy, but that in the medium term the goals, instruments and strategies of the bank would be tested and its mandate might be interpreted more broadly – including for example environmental and social targets as well. On the macroeconomic side, the Purchasing Managers' Indices (PMIs) stabilized in many regions in December, although manufacturing mostly remained in recessionary territory. However, the most recent Ifo figures from Germany clearly exceeded expectations. The U.S. labor market meanwhile continues to look strong.

Summing up, the year ended somewhat better than expected on a political level, and a recession did not occur in any of the world's major economies. Growth, however, was not higher than most observers had expected and corporate earnings actually fell short of expectations. On the other hand, the central banks were far more expansionary than expected at the beginning of the year – and the markets performed much better than expected. At 27.3%, the MSCI AC World Index achieved its third best annual total return since 1991. This is not necessarily a bad omen for the current year, as historically a good year has been followed by another good year more often than not. But stretched valuations and the generally quite high level of market confidence leave us only cautiously optimistic.

Before we move on to the tactical (one-to-three month horizon) changes, a brief word about our strategic outlook (12-months horizon). Shortly before Christmas, a brief strategy meeting was held to review the decisions made at the last meeting in light of market developments and the progress made on Brexit and the U.S.-China trade dispute. Overall, our 12-month forecasts showed little need for revision. The price target for the S&P 500 was adjusted slightly upward on the basis of lower tariff forecasts. The pronounced year-end rally pushed market indices to levels that leave little more return potential (according to our index forecasts) than the expected dividend yield.

On a tactical level, we have made no changes at a sector or country level for equities. Even though we expect positive returns over a 12-month period, we do see potential for disappointment in the short term, whether in an unpromising partial agreement between the United States and China, or in Boris Johnson's risky, high-speed game with the EU. Disappointments could also come from the reporting season for the fourth quarter, as the uncertainty caused by the trade dispute could still be reflected in many sectors. The U.S. election campaign could also cause volatile markets, especially as the president is facing impeachment proceedings. Although we do not expect them to affect his current term of office.

There have been some tactical adjustments in bonds and currencies. These primarily reflect the perceived easing in the trade dispute, which has increased investors' appetite for risk. For this reason, we have upgraded emerging-market corporate bonds and U.S. investment grade to positive, as well as U.S. mortgage-backed securities. We have also downgraded the euro-yen currency pair to neutral. Although we continue to regard the yen as a good hedge against macro risks, we do not see any further appreciation against the euro in the short term. Most recently, due to macroeconomic stabilization and recently slower supply growth, we have upgraded crude oil and, as a potential hedging instrument, gold.

From a portfolio perspective we are entering the New Year with a somewhat more cautious attitude after the year-end rally. This means a lower equity allocation and a slightly higher weighting for long-term bonds compared with the previous month in order to be ready for short-term market corrections. In regional terms, we are focusing more on equities in the United States and the Eurozone and are maintaining a balanced weighting of growth vs. value stocks. For bonds we expect largely sideway movements, but see a slightly better risk-return profile in the United States. 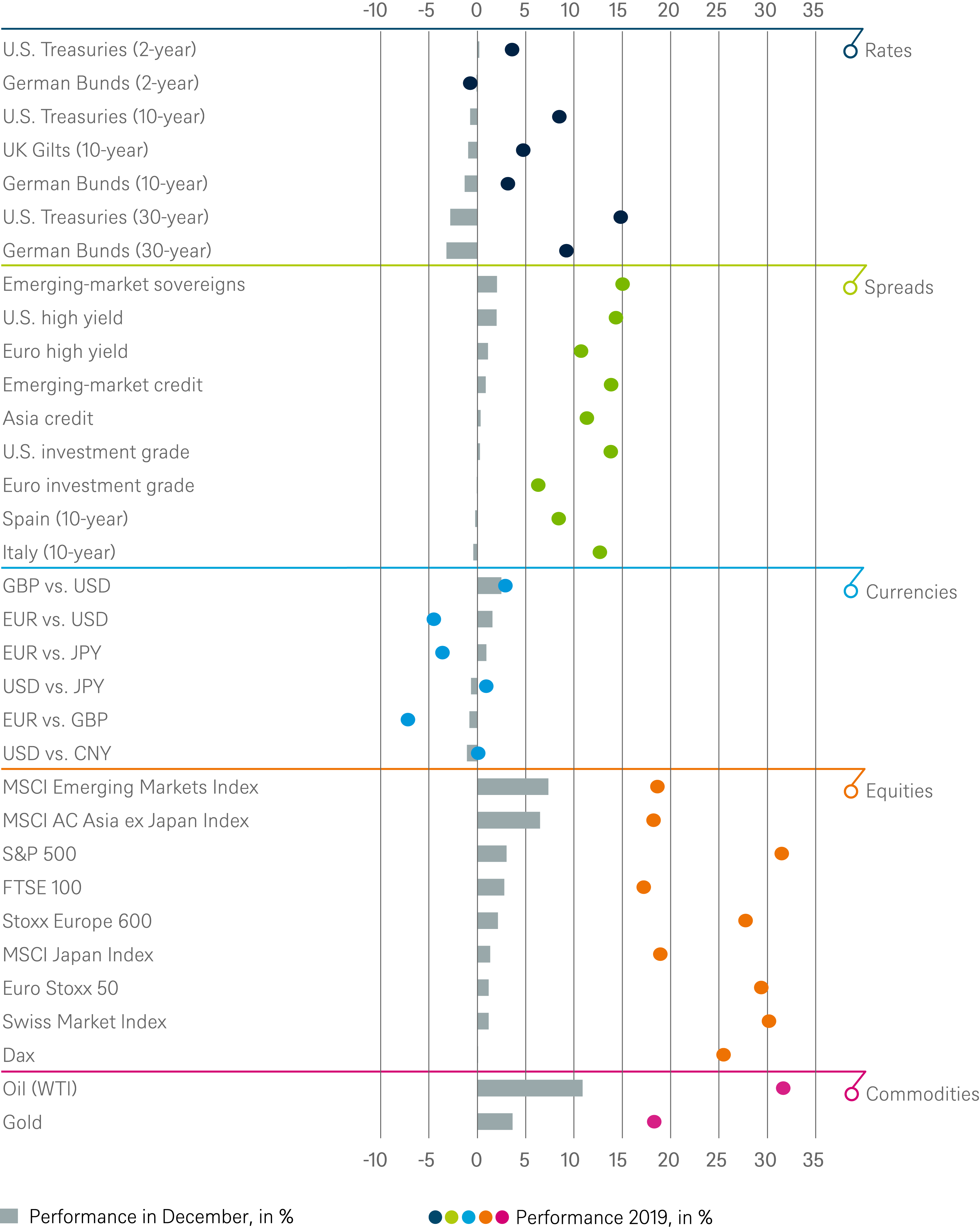 26. Relative
to the Bloomberg Commodity Index

Over the past quarter it has become clear that with the ongoing crisis the impact on corporate fundamentals may be comparable to those witnessed in 2009.

It’s too early to write the dollar’s obituary

Tech titans: super enterprises in a class all their own