No wonder the President of the United States was frustrated when he compared the raging wild fires on the West Coast with the relative calm in Europe. His explanation was that Europeans, partly living in forest cities, are better dealing with the threat for example by raking their forests more regularly[1]. It rather seems that weather conditions have been more extreme in the United States for quite a while already. The result is that the United States is top ranked when it comes to the financial losses incurred from extreme-weather events among the developed countries. According to data from the National Oceanic and Atmospheric Administration (NOAA), between 1980 and 2019 the United States sustained 263 weather and climate disasters with damages totaling 1.77 trillion U.S. dollars or more than three times the comparable figure for Europe, as shown in our "Chart of the Week"[2]. According to the European Environment Agency, weather and climate-related losses for the European Union (EU) between 1980 and 2017 (latest data) amounted to 480 billion dollars[3].

This may help to explain why action at a sub-national level is so much more widespread in the United States than Europe when measured by population. The "New Climate Institute" shows in a new report, that in the United States 27 regions and 121 cities have made net zero greenhouse-gas emission reduction pledges representing over 222 million people or 60% of the population[4]. This includes nearly half of all U.S. states such as California, Louisiana and New York.

In comparison, similar pledges at a European city and regional level cover 162 million people or just 36% of the EU’s total population. While the EU as a whole has committed to net-zero emissions by 2050, the Trump administration’s intention to withdraw from the Paris Agreement also helps to explain the growth in net-zero commitments from U.S. city and regional governments, companies and financial institutions.

In a landmark pledge for climate action President Xi announced just this week that China will aim to peak CO2 emissions before 2030 and deliver climate neutrality before 2060.

Where the United States and Europe don’t differ is in the concern their populations have towards climate change and the responses required. According to a poll (from Ipsos-MORI) conducted in April this year 57% of Americans and Germans alike say their government’s response to Covid-19 should prioritize climate change[5].

Research shows the best way governments can power job creation is through green stimulus. Subsidies for renewable energy and energy efficiency create three times as many jobs per dollar as subsidies for fossil fuels[6]. That is surely not the only example that shows that good climate policies are less of an obstacle but can be a solution to various problems. 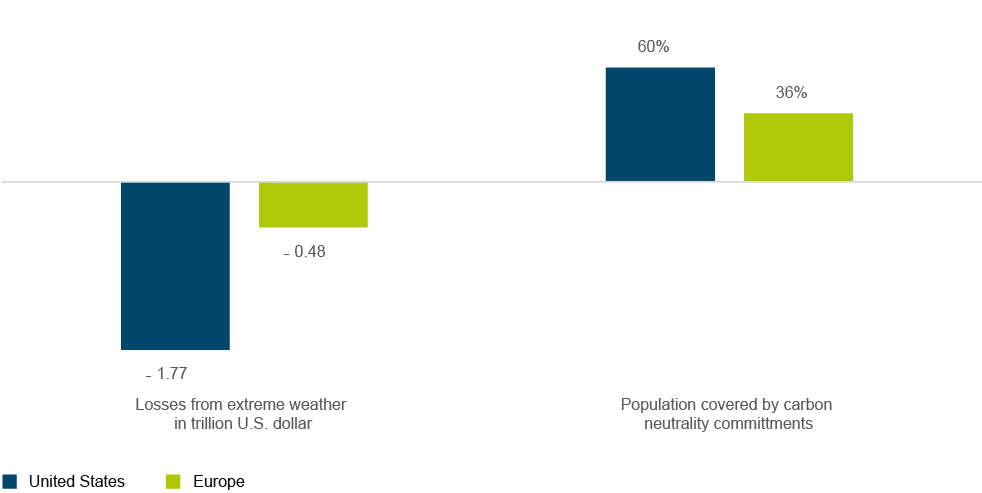 Sustainability: 17 goals that are changing the world

Five years ago, the United Nations adopted 17 sustainability goals. The decision was a milestone – and that applies to financial markets too.

How sub-national actors have taken center stage in climate action

Investing in health: it’s not all about Covid

Demographic changes should further increase demand for healthcare services in the coming years. This opens up return opportunities for investors.