How a virus may speed up the energy transition

What the last few months taught us about winners, losers and survivors in European electricity markets.

Covid-19 has been an unprecedented shock for global energy markets in general. The pandemic is expected to cause the biggest drop in global energy demand in modern history. To put things in perspective, the 6% reduction in energy demand expected for 2020 may be over six times the scale of the drop experienced during the Great Financial Crisis.

You might recall that back in April, the price per barrel of West-Texas-Intermediate (WTI) crude for the May 2020 futures collapsed to almost minus forty dollars. That took a perfect storm of weak demand due to Covid-19, unrestrained production by producers, and the near exhaustion of storage capacity at Cushing in Oklahoma. Cushing landlocked, also known as the "Pipeline Crossroads of the World", is the delivery point specified in WTI futures contracts.[1]

The shock has also been severe for electricity markets in Europe. However, unlike the situation in oil markets, short-lived episodes of negative prices for hourly contracts have become increasingly common over the past decade in European electricity markets. [2] Moreover, utilities tend to hedge power prices for 12 to 18 months, further mitigating the potential financial impact of such risks.

Lockdown measures led to a material contraction of industrial production in March and April, and to a decline in peak power prices. Residential demand has remained more resilient, providing some support to baseload power prices. However, the growth in renewable energy capacity, and especially wind, has made key sources of electricity generation increasingly unpredictable. Crucially, electricity cannot be easily stored, unlike crude oil for example, and large-scale chemical batteries are not yet a fully economically viable electricity storage solution. To keep the electrical grid stable, surplus production has to be temporarily switched off. Or demand has to be boosted, say by inducing large electricity users to increase consumption, pumping up water to the reservoir of a hydropower plant.

As a result, roughly at the same time that WTI-crude futures prices went sub-zero, there were similar short-lived price patterns in the electricity markets of several countries, notably in Germany and France. The main difference is that it did not take anyone by surprise to see negative prices for electricity (which are usually traded one day ahead) for a few hours. In certain European electricity markets, such short-lived events are almost inevitable, due to inflexible renewable or nuclear power production, and limited capacity either of pumped-storage hydropower plants or batteries, when there is historically low power demand.

Like the events in Cushing, however, developments in Europe point to opportunities as well as threats for investors in infrastructure assets. The collapse in WTI prices highlighted the need for additional and more flexible crude storage capacity in the United States. In Europe, investors have had plenty of time to come to terms with this sort of challenge, not only determined by market conditions, but also by a clear direction of policymakers supporting energy transition over recent years.

Notably, lower energy consumption has also resulted in a decline in global CO2-emission, now expected to decrease by 8% in 2020. In Europe, CO2-emission prices have initially dropped substantially to 15 euros per ton, before rebounding strongly to about 25 euros. [3] That is roughly where emissions prices were trading before the crisis. It partly reflects plans by the European Union (EU) for a green recovery, such as imposing carbon tariffs on imported goods. This would allow the bloc to further shrink the pool of emissions permits and effectively increasing emission prices, without eroding the competitiveness of EU manufacturers.

As lockdown measures are being progressively lifted across several European countries, we note that industrial production and power demand are gradually resuming, supporting a recovery in power prices already seen during the past eight weeks. However, we anticipate that the recovery may be slow, and progress well into 2021.

In our view, the Covid-19 crisis may represent a catalyst for the ongoing energy-transition process, and provide us with an indication of who may be the winners, losers and survivors over the coming years. One way or the other, it seems likely that things will only get harder for coal-fired power stations, Germany, the Netherlands, Italy, France and the United Kingdom all have plans to accelerate the phase out of coal and lignite.

Meanwhile more efficient gas generators will probably have a role to play in supplying peak demand. With renewables generation continuing to expand across Europe, the need to balance supply and demand on the power grid should continue to prove supportive for efficient gas power generation in the long-term. Merchant power generation margins have been hit by weaker power prices. Nevertheless, European utilities have proven to be largely resilient so far, as electricity networks benefit from regulated returns, and hedging contracts generally stabilizing margins over a period of 12 to 18 months. In the longer-term, more interconnectors between national power grids could reduce pricing power, however.

The likely winners certainly include renewables, which the International Energy Agency expects to be the only energy source experiencing demand growth in 2020. In the short term, lower power prices may negatively impact planning assumptions for projects. Nevertheless, falling technology costs, particularly for photovoltaic, should in our view support renewables as the likely long-term winner in the energy transition process.

As retail-power prices are already high in some countries, including for example Germany, financing the energy transition may be more complex than what is currently envisaged. A growing share of renewables will require substantial investment in grids. Smart grids use digital communications technology to detect and react to local changes in usage. As a result, they can help alleviate the need for big moves in prices of the sort we saw in April. Energy-from-waste and energy storage, should also benefit. As the price of battery storage should continue to fall, transport electrification poses a threat to oil demand, but likely only in the long-term, as the process of substitution may be slow.

For farsighted investors willing to do their homework in understanding the intricacies of electricity markets, we believe there will certainly be no shortage of opportunities to consider deploying capital.

Coal-fired power plants are likely to be squeezed further in industrialized countries. However, they may well continue to play a role in electricity supply across emerging markets. 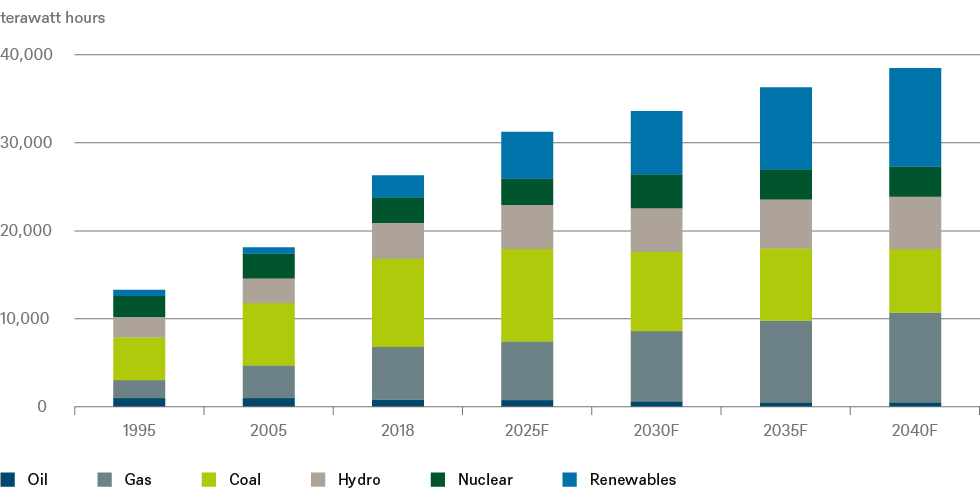 Sources: S&P Global, Platts Analytics as of May 2020

Alternative investments may be speculative and involve significant risks including illiquidity, heightened potential for loss and lack of transparency. Alternatives are not suitable for all clients. This information is subject to change at any time, based upon economic, market and other considerations and should not be construed as a recommendation. Past performance is not indicative of future returns. Forecasts are based on assumptions, estimates, opinions and hypothetical models that may prove to be incorrect.

The bulls are back in town
See all articles

Alternative investments may be speculative and involve significant risks including illiquidity, heightened potential for loss and lack of transparency. Alternatives are not suitable for all clients. This information is subject to change at any time, based upon economic, market and other considerations and should not be construed as a recommendation. Past performance is not indicative of future returns. Forecasts are based on assumptions, estimates, opinions and hypothetical models that may prove to be incorrect.