Only a few years ago, U.S. companies could be sure that their international trade was supported by reliable bilateral or multilateral agreements. Now it seems that short-term changes[1] initiated by the White House are the "new normal," especially in trade with China.

After another significant deterioration in U.S.-Chinese relations in recent weeks, the signs for the review of the trade agreement (Phase 1) signed in January were dismal already. Our "Chart of the Week" is adding to this. It shows how Chinese agricultural- and industrial-goods imports are lagging far behind the planned figures for the rest of the year.[2]

There are of course some good reasons for this, above all the Covid-19 crisis. Perhaps that is why the United States sounded restrained in the run-up to the talks scheduled for August 15-16. The fact that the talks were postponed without providing any reason, however, was worrying, but then conciliatory voices from Washington followed. On August 17, White House trade advisor Peter Navarro saw the trade agreement as "well on track" and Donald Trump praised China for "wanting to make him happy"[3] with their purchases. Just one day later, however, he announced that he no longer wanted to talk to China[4].

Elke Speidel-Walz, DWS Chief Economist for Emerging Markets, comments: "Actually, the trade agreement seems to be only a side show for China. The extensive sanctions against Chinese telecommunication, technology and, more recently, internet companies are doing far more damage to China than potential new punitive tariffs. Beijing's incentive to support Trump politically with higher imports is now likely to be low. Especially if some sanctions were to be implemented from mid-September onwards."

All this means increasing risks for global financial markets. Beijing could still react with retaliatory measures. And the trade dispute could be prolonged. Overall, the decoupling of the world’s two largest economies is therefore continuing, we believe to the detriment of both – and the rest of the world. Although the share of exports in gross domestic product (GDP) is relatively low in the United States at 12.2% for 2018, the average share of exports as a proportion of revenues for S&P 500 companies is almost 50%.[5] Some U.S. corporations generate higher revenues in China than in the United States. They are likely to continue their lobbying activities in Washington regardless of the outcome of the election. But for now we doubt they will be very successful. 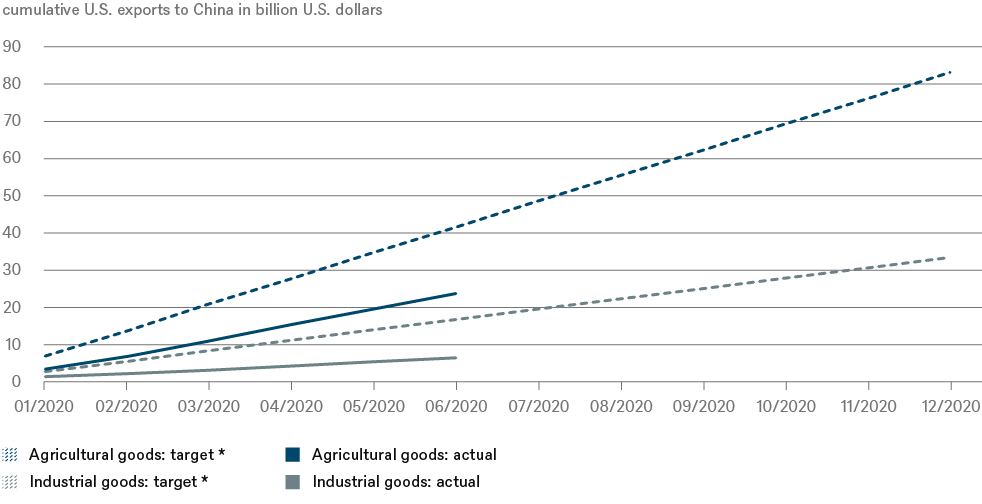 * For this chart, the annual target is assumed to be equally distributed across the months
Sources: United States Census Bureau, DWS Investment GmbH as of 7/27/20

1. Announcements about legal changes can already be enough to increase the uncertainty amongst business leaders.

2. Assuming the 2020 target is evenly spread across the months.

Is the ECB about to floor the monetary gas pedal again?

Covid-19 infection rates are on the rise again. So, why have growth forecasts become more optimistic? Trends in service-sector sentiments suggest some answers