Rising prices for an unloved product

When OPEC meets again next Wednesday, April 28, the mood should be almost relaxed. Thanks to the economic recovery, production volumes are being allowed to rise. Meanwhile, discipline till now has helped to keep oil prices at a respectably high level in recent months. However, global economic recovery joy in this sector is likely to be much more restrained than in other cyclical sectors, as the Chart of the Week shows.

First, there is the relative price performance of the fossil-fuel-dominated energy sector that has been going in only one direction for years: downhill. Demand for oil is still growing now but investors foresee decreasing longer-term demand.[1] The industry seems to agree. While the energy sector's capital investment in 2014 made up almost half of that of all other sectors' investments combined, its relative share is now down to less than 15%.[2] This share could decline even further in the context of economic stimulus packages in the United States and Europe that are supporting everything except conventional energy. At the same time, investors seem less willing to continue injecting fresh capital into the sector, especially into the investment-hungry U.S. shale oil industry. Even more so as sustainability becomes more directly incorporated into the investment decisions of institutional investors.

There seems to be no golden future for the oil industry in the long run. And yet we might still see continued price peaks in the "black gold." The oil industry's reluctance to invest in recent years is likely to ensure that demand for oil, which might, for now, continue to grow, meets a tighter supply side. Normally, in a capital-intensive industry such as oil, the mechanics of the hog cycle should kick in, with the supply shortage caused by underinvestment followed by an increase in prices, investment and in turn falling prices. However, as the pressure to phase out CO2-intensive energy production has never been greater, and renewable energies are increasingly becoming competitive, the willingness to respond to oil-price increases with capacity expansion is likely to be subdued.

And so, whether it is despite oil being outlawed or because it is, motorists should not bet on being able to fill up their tanks more cheaply in the coming decade.[3] 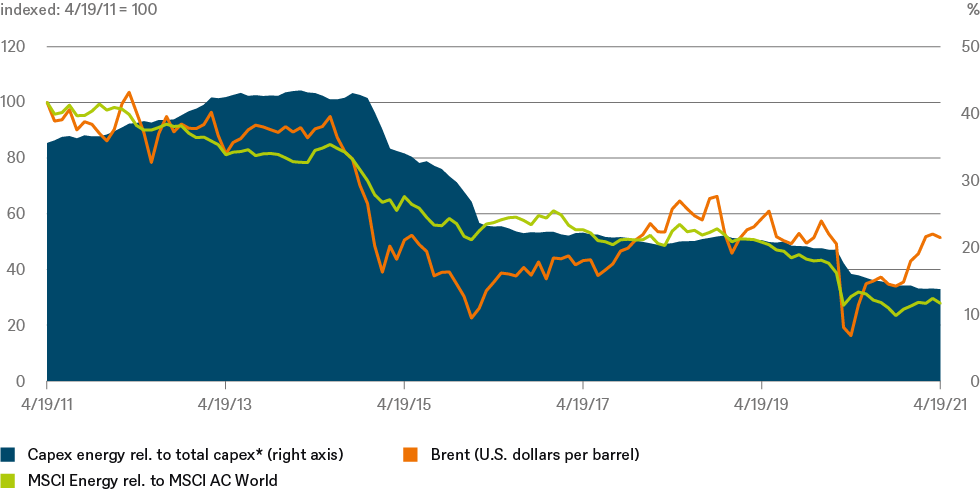 2. As measured by next-12-months consensus estimates for the MSCI AC World (Energy)

3. Industry experts from Wood Mackenzie in their more aggressive scenario – full compliance to the Paris accord – also expect an average oil price of 40 U.S. dollars per barrel only from 2030 onwards. https://www.woodmac.com/press-releases/action-to-achieve-paris-climate-goals-will-upend-oil-and-gas-prices/

Workers are viewed as the most financially material of a company’s stakeholders
Jun 16, 2021 Equities

Beyond the reopening
See all articles