This article is as of March 16, 2020. While the story line still reflects our current thinking, the coronavirus' rapid spread and the drastic measures to contain it will probably force us to adjust our forecasts downwards.

Can you believe that it is only mid-March? It already feels like the last two weeks have seen more developments than most years since – and indeed before – the 2008 financial crisis! In this long business cycle, everything has been moving in slow motion: weak credit creation, weak capital-expenditure (capex) spending, weak inflation and so on. Not so, it turned out, in the almost daily series of stock-market plunges that ended the 11-year-long equity bull market in the United States and much of the rest of the world.

Such market corrections do not necessarily spell economic doom in and of themselves. Since Wall Street's Black Monday crash in October 1987, central banks in the U.S. and the Eurozone have been willing and, eventually, able to calm investor nerves by cutting rates, injecting liquidity or both. This time around, they have so far appeared powerless to limit contagion – the viral spread of fear, if you wish. Much the same, sadly, can be said about the novel coronavirus Covid-19, which was officially declared a pandemic by the World Health Organization (WHO) on March 11. On the same day, the U.S. announced a ban for European air passengers.

To avoid being overly influenced by the recent apocalyptic market mood it might be helpful to recall what the world economy felt and looked like only six short weeks ago. January finally saw the long-hoped-for phase-one trade deal between the United States and China. Brexit, too, finally happened, removing another persistent source of uncertainty, at least for now. Not coincidentally, there were also indications that the weakness in global manufacturing was beginning to fade. Our hopes that services, coupled with solid private consumption, would carry us through a phase of weakness in manufacturing, seemed to be holding.

But then, Covid-19 introduced a hefty dose of uncertainty and downside risks to our forecasts. How to model an expected quarterly global growth pattern, without even knowing exactly where and how the disease might strike next? Back then, Covid-19 still seemed to be far away from the Western world, but the growth in daily infections in Hubai province appeared extremely troubling. Would we see a second wave of new infections in China, once normal business activity resumed later in the year? Or perhaps elsewhere? And when exactly would China return to work at full capacity, or at least at pre-crisis levels again? Along with the whole analyst community, we have been searching and tracking all sorts of daily data. We didn't just look at new Covid-19 infection cases, but also at things like traffic congestion, air pollution and other indicators for Chinese cities, some of which, to be perfectly frank, I had never heard of before the virus outbreak.

Now, we need to translate the new information into gross-domestic-product (GDP) forecasts. Ahead of the outbreak of the coronavirus, we had penciled in a "natural" annualized growth rate of about 6% for China in 2020. From that, we now expect a sharp slowdown in China's growth to an annualized -1.5% in the first quarter, before a strong rebound we believe likely to start in the course of the second quarter, driven by factors like a restocking of depleted inventories, pent-up demand for some goods and services and supported by substantial macroeconomic stimulus.

After the rebound, we expect Chinese growth to moderate again into the second half of 2020. That would leave us with an overall growth figure of 5% for the full year 2020. However, plenty of uncertainty surrounds that figure in both directions. As a statistical, if not medical, matter, Covid-19 uncertainty spills over into our forecasts for 2021, too. By then, we expect the disease to be well contained. As a result, year-on-year comparisons should heavily flatter China's growth in the first quarter – and more so the weaker this year's first-quarter growth to be announced on April 17, 2020.

I have explained our approach to forecasting Chinese growth in detail partly to illustrate how difficult modelling an expected quarterly growth pattern is, even once we know, more or less, how the disease has developed during the initial period. In China, the number of new infections has slowed to a trickle in recent days. As for the rest of the world, matters will probably get worse, potentially much worse, before they get better. Plenty of uncertainty remains. According to the WHO, South Korea currently has around 8,300 confirmed cases, thereof 74 deaths and new infections appear to be declining. By contrast, Italy has seen nearly 25,000 people getting infected and over 1,800 deaths at the time of writing.[1] This has prompted the Italian government to essentially put the entire country under quarantine.

In coming weeks, new clusters of cases are likely to emerge around the world. Against this backdrop, we have cut our 2020 economic growth forecasts to 1.0% instead of 1.6% for the United States, 0.0% instead of 0.6% for the Eurozone and 2.5% for the world economy, followed by a fairly sharp rebound in 2021. The stagnation in Europe partly reflects the situation in Italy, and our current thinking on how Covid-19 might develop in other countries. Plenty of uncertainty remains, however, not least in terms of the containment measures countries might take and how effective those might prove to be. Of course, countries also have different starting points in terms of economic momentum before the virus struck. For example, Italy had already been stagnating, after a sharp contraction in the last quarter of 2019. In Japan, we had to make a sharp downward adjustment despite new Covid-19 infections through local transmission appearing unusually well contained. Similarly, we have had to cut our forecast for Asian emerging markets to 5.4% for 2020, mainly reflecting the slowdown in China.

Perhaps the biggest single reason for the uncertainty surrounding our forecasts is the situation in the United States. On the one hand, the epidemic is in the early stages at the time of writing and so is the potential financial contagion from a lower oil price and turmoil in high-yield-bond and equity markets. On the other hand, momentum looked solid heading into the crisis. Indeed, if it had not been for the coronavirus outbreak, we would probably have upgraded U.S. growth. That said (economists, after all, are notorious for having three hands), the evidence that the U.S. business cycle is maturing has been mounting.

One sign is the stagnation in underlying U.S. corporate-sector profitability – unhelpful, to say the least, if corporate indebtedness becomes a major market concern. The U.S. labor market also points towards a bottoming out in the unemployment rate. The number of temporary jobs is no longer rising. If matters get worse in terms of viral infections or fear-driven financial-market contagion, Covid-19 could derail this long economic recovery. Or it may provide it with a new lease on life thanks to various stimulus measures. We continue to lean towards the second scenario, but admit that unusually large bands of uncertainty surround our forecast.

U.S. profits have been stalling

For a number of years, corporate profits, measured as receipts less expenses as defined in federal tax law, have been trending sideways. This is a typical pattern late in the business cycle. 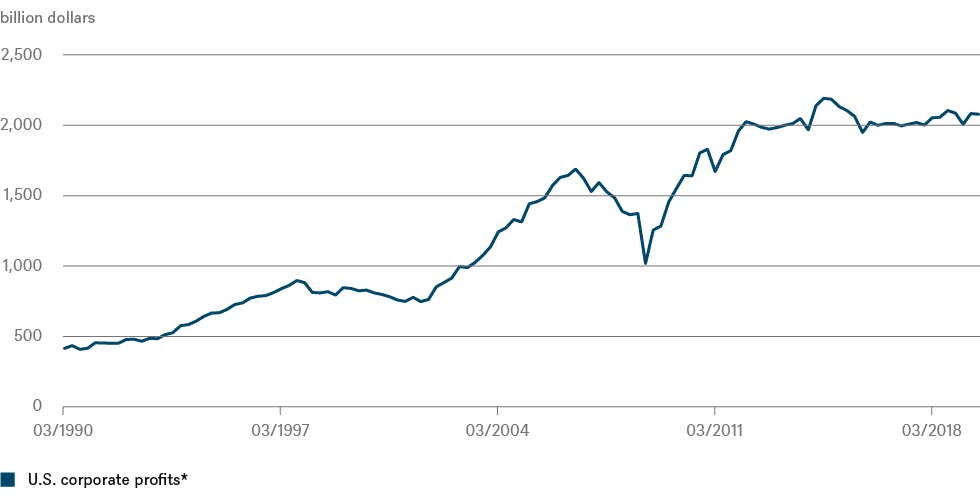 * Corporate profits with inventory-valuation and capital-consumption adjustments.
Source: U.S. Bureau of Economic Analysis as of 2/25/20

Since the end of 2018, job openings, as measured by the Job Openings and Labor Turnover Survey (JOLTS) have declined significantly but are still above the number of unemployed. 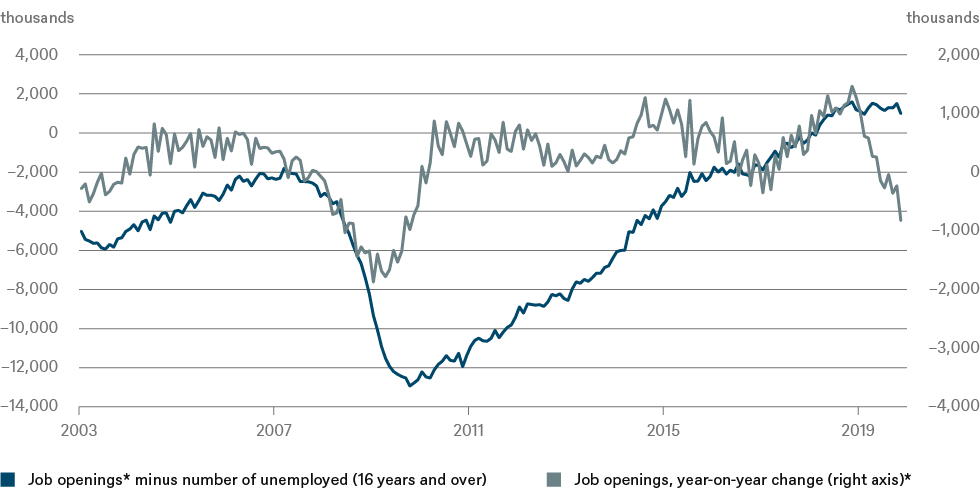 Higher inflation might persist for a while longer
Jun 11, 2021 Macro

Plans to revamp the international rules on corporate taxation are the latest sign of the political pendulum swinging in favor of labor.
More topics