So far, so good. When discussing its recently presented monetary-policy-framework review, the U.S. Federal Reserve (Fed) had promised an "… evolution, not a revolution …"[1] and on that, the Fed has certainly delivered, both at the Jackson Hole symposium last month and at its September monetary-policy meeting. After all, an evolution is a developmental process from something simple to something more complex and the new framework indeed got far more complex. Not less than twelve scientific papers, a whole set of accompanying speeches, and an extensive Q&A have been published along the revisited statement of longer-run goals and monetary-policy strategy.[2] Maybe because of this vast amount of information, markets mainly focused on the "lower for even longer" narrative: the main message taken was inflation for goods and services now can overshoot the two-percent target for some time. From our point of view, however, the framework acknowledges the limitations of current economic theory, especially in a globalized world, with remarkable frankness.

The major change was the weakening of any strict formal relationship between inflation and employment. The underlying concept, the Phillips Curve, has a long history since its original formulation in 1958. Recent versions predicted inflationary pressure would increase once unemployment approached what is considered to be its natural level – Non-Accelerating Inflation Rate of Unemployment (NAIRU) – prompting the Fed to react by raising interest rates. Chart 1 shows that this logic has been a fairly nice predictor of the Federal funds rate since the early 2000s. 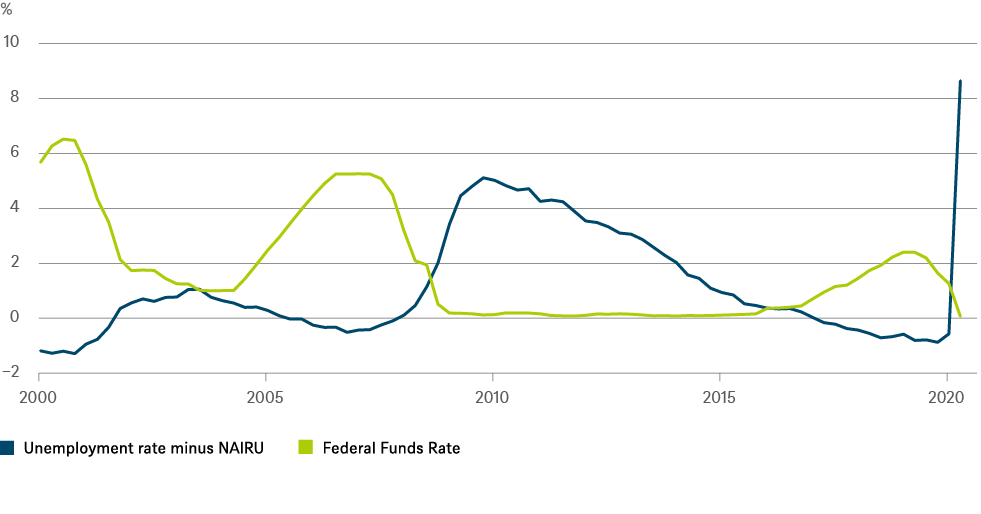 Alas, the problems with this approach have become increasingly obvious – especially, in the aftermath of the Great Financial Crisis (Chart 2) . Empirical representations of the Phillips Curve suggest a rather weak relationship between unemployment and inflation. With a few exceptions, inflation, as measured by the Personal Consumption Expenditure (PCE) Index, tended to undershoot the two-percent target since its introduction in 2012 – even when the economy is at or above full employment.[3] And hence, the inverse relationship as predicted by the Phillips Curve seems tenuous at best.

Sources: Bureau of Labor Statistics and Congressional Budget Office as of 9/15/20

Which leads to another, pretty obvious problem: what is full employment, consistent with overall price stability? How does NAIRU itself change over time? Or as Chair Powell puts it: "… the maximum level of employment is not directly measurable and changes over time for reasons unrelated to monetary policy."[4] Following the Fed's framework review, it instead emphasizes that maximum employment is a qualitative, broad-based and inclusive goal. For the Fed, this has the added advantage of leaving plenty of scope for interpretation.

That said, the new employment-reaction function, seems to be asymmetrical as the Fed now targets "…the shortfalls of employment from its maximum level, recognizing that such assessments are necessarily uncertain and subject to revision."[5] This formulation grants the Fed lots of degrees of freedom and implicitly introduces a dovish bias: in good times employment can increase further than before but the Fed will react quicker with more accommodation, once risks emerge to labor markets.

In addition to unceremoniously ditching the Phillips Curve, the new framework introduces a second major change, namely the one immediately noticed by market participants. Chair Powell calls the new approach "… a flexible form of average inflation targeting," which seeks "… to achieve inflation that averages 2 percent over time …" but "… if excessive inflationary pressures were to build … we would not hesitate to act."[4] It is important to understand that this formulation implies far more than simply wait and see for some arbitrarily time to get the desired two-percent inflation on average. In other words, the Fed continues to think that a longer-run inflation of two-percent seems desirable. But from now on they will tolerate inflation moderately above two percent, following periods in which it has been persistently below the target.[6]

It remains to be seen what all this will mean in practice. However, it seems likely that the Fed's reaction function too might evolve toward more complexity. In addition to its qualitative employment goals, several other elements are likely to play key roles, including long-term inflation expectations by households and businesses, as well as the velocity of change of inflation. Also, rather subtly, we may have witnessed a change of the target variable: a footnote in Chair Powell's speech now mentions overall PCE instead of the former preferred core PCE (excluding volatile components like energy and food).[4] Finally, and crucially, the Fed explicitly mentioned two elements that did not change during the review: first, the time lag in the effectiveness of monetary policy and second, the Fed's medium-term outlook's crucial role for monetary-policy setting.[6] From our point of view, this again represents an asymmetrical reaction function: the Fed will remain patient for longer but once inflation expectations start to rise significantly, they intend to act swiftly.

All told, the Fed's framework review has produced some interesting insights, beyond simply allowing inflation to temporarily run above the two-percent target. Perhaps wisely given all the uncertainties outlined, the U.S. central bank will not tie itself to any specific mathematical formulation of a reaction function. Still, we could not resist to crunching some numbers (Chart 3).[7] 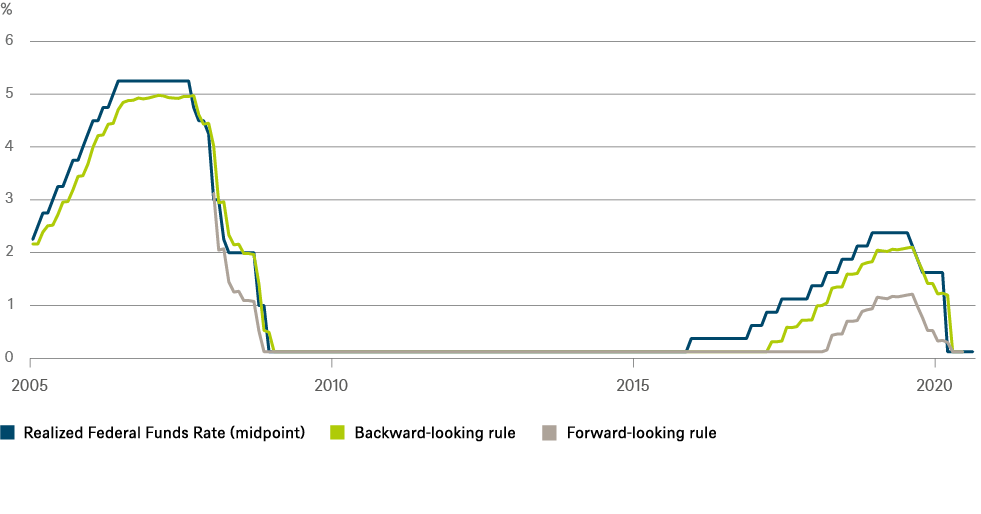 In line with most recent Fed papers, we calibrated our model relays to an eight-year time horizon.[8] For the backward-looking version simply an eight-year moving average of inflation enters in the calculation. For the forward-looking version, we included five years of historical inflation as well as three years of inflation expectations as provided by the Summary of Economic Projections (SEP). The result, while obviously far from representative, nevertheless is quite stunning. In the last hiking cycle, the lack of inflation, or the expectations thereof, the Fed would have held rates lower for quite longer. Without inflationary pressure stemming from overheating labor markets (recall the dysfunctional Phillips-Curve relationship) such a policy would have had the potential to produce superior employment levels than those we had seen in the past.

So, the Fed has "solved" the Phillips-Curve dilemma by abandoning it. Its timing is a bit odd, though. For many commentators, including us, one key element to help solve the puzzle of a dysfunctional Phillips-Curve relationship has been globalization. Put simply, while goods prices depend on global competition (technology and wages), service prices may depend more on local variables like the availability of domestic workers. The markets for services tend to be local while markets for goods tend to be global, and there are some hints of this in the data (see Chart 2). For the service sector, inflation has trended above two-percent even before the unemployment rate converges toward the NAIRU. The classical Phillips-Curve relationship seems to hold: fewer available service workers imply higher wages, imply higher prices for domestic services. Goods inflation, however, has regularly fallen short of its target.

The snag is that recent developments like the trade war could well continue to prompt large scale re-organizations of global supply chains. The Covid-19 crisis too might result in structural changes that could make such globalized thinking obsolete, resulting in less available capacity for local services as a consequence of social-distancing measures. All this could well imply higher inflation for goods and services in the near future.

Looking ahead, we well could imagine the return of a revamped Phillips Curve that also accounts for sectoral idiosyncrasies, i.e. includes global factors to explain goods inflation. The framework review addresses the theoretical constraints of fully capturing the employment and inflation trade-off. That at least shows some kind of evolution in economic thinking. As evolutionary biologists well know, however, not every change is necessary for the better. From this point of view it is somewhat reassuring that the Fed has given itself plenty of flexibility. With respect to the resulting uncertainty for financial markets, it is also comforting to know that financial conditions and the role of Large Scale Asset Purchase Programs might have seen an upgrade within the framework review. The Fed also once again promised to further use all of its tools available to achieve their dual mandate. Still, we believe it is far too early to say which bits of its newly evolved framework will stand the test of time – and which of its recent innovations might eventually go the way of the dodo.

3. Full employment here is defined as the unemployment rate at or below the NAIRU.

7. Helpfully, one source within the framework literature provided some formulas: https://www.federalreserve.gov/econres/feds/alternative-strategies-how-do-they-work-how-might-they-help.htm

All opinions and claims are based upon data on 9/17/20 and may not come to pass. This information is subject to change at any time, based upon economic, market and other considerations and should not be construed as a recommendation. Past performance is not indicative of future returns. Forecasts are not a reliable indicator of future performance. Forecasts are based on assumptions, estimates, opinions and hypothetical models that may prove to be incorrect. Source: DWS Investment GmbH

Looking good for Democrats – don't count out the underdogs, though

The polls have spoken: Have the people?