The first quarter of 2021 was characterized by conflicts and contrasts. America's dynamism versus Europe's stagnation. Vaccine progress versus new waves of the virus, new mutations and further lockdowns. The United States versus China. Growth stocks versus cyclical ones. Retail investors versus institutional ones. Covid fatigue versus renascent industry. The German Constitutional Court versus the European Union's (EU's) 750 billion euro coronavirus aid package. And, in Germany specifically, the Christian Democratic Union (CDU) versus itself.

The United States once again dominated the global agenda. It is hard to believe that it is less than three months since Joe Biden was sworn in as the new U.S. President. The speed, effectiveness and tactical finesse with which he is carrying out his ambitious program have amazed not only us. The progress in vaccination and the billion-U.S. dollar fiscal packages are causing more and more economists to revise their 2021 growth estimates for the United States upward, from a consensus forecast of 3.9% at the beginning of the year to 5.7%.[1]‌ Financial markets are taking note. Despite the relative weakness of the technology heavyweights, the S&P 500 has been able to report new record highs, breaking through the 4,000 mark for the first time at the beginning of April, driven primarily by value stocks.

In the bond market, the cyclical momentum is reflected in the 10-year yields of U.S. government bonds, which touched 1.75% in late March, and also in a dramatic shift in the yield curve of 2- to 10-year bonds: in September 2019 that curve was still negative; at the beginning of 2021, it stood at 80 basis points and it has since roughly doubled. This also explains why the financial sector was the second strongest on the stock market in the first quarter, after energy. In general, U.S. companies are doing relatively well, which is also reflected in the fact that analysts raised their first quarter earnings estimates by 6% during the course of the quarter. According to Factset's[2]‌ calculations, this is the biggest increase within a quarter since 2002, when data collection began. However, on average, estimates are revised downward in the course of a quarter. What could put a damper on the euphoria in the medium term, and not only in the U.S. corporate sector, are the increasing signals that governments will eventually call on companies to finance the various economic stimulus packages – a reversal of the trend that has seen the burden on multinational corporations in particular falling steadily for years.

In Asia the economic recovery is somewhat less dynamic. This also has to do with the fact that the region shrank less sharply in 2020 – and in some cases did not shrink at all. That Asia was the equity market laggard in March reflects the aforementioned U.S. momentum – and a strong U.S. dollar and high U.S. yields tend historically to have a negative impact on emerging markets – and the increasingly sharp rhetoric of the United States toward China. We expect this tension to persist and to be more than just rhetoric: the clash between the two rival economic giants with their vastly different political and economic systems may result in concrete economic measures.

For the time being the global economy has not been affected too much by any of these longer-term fears and tensions, as can be seen in the 15-year high of 57.5 in the global Manufacturing Purchasing Managers' Index (PMI) as of March 21. This may also explain why European stock markets have also been rising steadily of late, despite the painfully slow vaccination campaign, further lockdowns and the threat that ratification of the Covid-19 bailout package may be delayed. Export-oriented industry is doing well but there is a general lack of economic momentum, which is reflected in government-bond yield increases that are muted compared to those in the United States. The fact that the European Central Bank (ECB) used the small rise in bond yields in February as grounds for expanding its monetary policy even further did not inspire confidence. But lack of confidence certainly did not stand in the way of Germany's Dax stock index: it achieved new record highs, breaking through the 15,000 point level.

In general, the first quarter’s best performers were cyclical and riskier stocks. In the bond market, meanwhile, riskier, high-yield (HY) bonds were among the few winners on both sides of the Atlantic, while 30-year U.S. government bonds posted their worst quarter since 1919, with a negative total return of 16%. While oil and the cyclically sensitive metal, copper, were among the first-quarter gainers, they fell back somewhat in March. Gold and silver, on the other hand, suffered losses both for the quarter as a whole and for March. All of this was a pale shadow of the turbulence of the first quarter of 2020. But this year's first quarter was also extraordinarily eventful and full of repositionings from a capital-market perspective.

...Another market mantra is to buy the rumor, sell the facts. Investors have very much been looking forward to the prospect of economic reopening and fiscal stimulus – and it might already be priced into markets.

Market logic might suggest the recent strength will continue. The market’s momentum is positive. And it has shown that it can keep going up even without technology leading the way. Secondly, investors are unlikely to want to sell equities while PMIs are strong and earnings as well as consensus earnings estimates are increasing. Finally, there is always the "don't fight the Fed" mantra. But this brings us to what may be grounds for caution. You might not want to fight the Fed, but is the Fed still in control?

Inflation is a concern. The Fed has recently reiterated that it would leave interest rates where they are at least until 2023. And that it is happy to let inflation overshoot 2% for some time. But, looking at current inflation dynamics and the mix of re-opening and supply-chain constraints, some investors might find it hard to believe (as we do) that this inflation is a one-off this and maybe next year, rather than the beginning of an inflationary trend.

Another market mantra is to buy the rumor, sell the facts. Investors have very much been looking forward to the prospect of economic reopening and fiscal stimulus – and it might already be priced into markets. When economies motor and stimulus is spent, the market might encounter more hiccups and difficulties than expected. And in relative terms we might now be seeing peak U.S. euphoria and peak Europe skepticism, which could reverse in the course of this year or next year. We have seen a similar development in Asia. It hit peak euphoria – first in and first out of the pandemic; less gross-domestic-product (GDP) loss than other regions – in the middle of last year; this might be one of the reasons why its markets are now lagging behind other regions.

While we believe the trajectory leading to higher sovereign-bond yields remains intact, we are only negative on German 10-year Bunds at present, as in most countries, after a high-speed run-up, consolidation is taking place at current levels. We are also neutral on emerging-market sovereign bonds (as well as other EM credit) as both negative local news[3] and a stronger U.S. dollar and higher rates are headwinds.

In corporates, we remain positive on most parts of the Euro and U.S. markets, except U.S. investment grade (IG), where we have turned neutral because we believe the market is running ahead of expectations. While this is also true for U.S. HY, this asset class tends to benefit from even more cyclical exposure and a lower average duration. Default rates are below the historical average and last year's expectations. Turning to Europe, corporate bonds have the benefit of less competition from sovereign bonds, some of which are still offering negative yields. We are, however, becoming a little bit more selective for both IG and HY.

We are positive on the U.S. dollar versus various currencies, because of the greater dynamism of the United States at present and the interest yield gap to many other regions, most notably the Eurozone.

There are mixed signals for equities in the next quarter. While earnings are surprisingly strong, rising interest yields are capping equity valuations. We still believe a barbell strategy, using cyclical stocks and Information Technology, may be among the best options in this situation, as we explain below.

We stick to our view that our market forecast – the S&P 500 at 4,100 in March 2022 – offers modest upside so long as real interest rates remain negative, i.e. U.S. 10-year Treasury yields stay below ~2%. Most companies should be able to pass on input-cost inflation to customers and therefore offer a certain degree of "inflation protection" to equity investors. We expect though that higher nominal yields will cap the upside on U.S. valuation multiples. Our assumptions on European valuation multiples are rather conservative.

Higher yields have triggered a massive rotation out of "high-duration" stocks into cyclical companies. As a result, the composition of "momentum" has shifted from "growth" to "value." The chances are high that this trend will continue as long as global PMIs keep improving. Therefore, we stick to a barbell strategy which should make it possible to share in strong earnings growth and limit interest-rate exposure at the same time. We therefore prefer on one side the barbell cyclical exposure between and within sectors. Automotive and consumer service stocks, commodity chemicals and many industrials in Europe and Asia remain attractive. In the United States, banks should still offer upside, as they wind down their 2020 loan-loss provisions, return excess capital to shareholders and improve their interest income. In our view, EU small caps offer more cyclical upside than their large-cap peers. Following their significant outperformance in the year to date, energy companies have by now probably seen most of their recovery. On the other side of the barbell, we stick to our long-held IT overweight, as the secular digitalization trend remains intact. We would, however, continue to avoid hyper-expensive growth stocks (e.g. those with valuations of Enterprise Valuation-to-sales larger than 20x). We stick to a real-estate underweight for the time being, however, though we are aware the sector has some "economic reopening" attractiveness.

On a regional level, we stick to our preference for Asia despite its recent underperformance. We remain attracted by expected 30% earnings-per-share (EPS) growth in 2021, reasonable valuations, Chinese economic strength and the rising participation of domestic investors.

The oil market has had a lot to digest in recent weeks: the Suez blockage, the OPEC meeting that resulted in the expected agreement to ramp up production gradually over the next three months, and of course the conflicting signals from vaccination progress in some countries and new lockdowns in others. Overall we expect crude prices to remain supported, though there could be some short-term volatility. Precious metals continue to bear the brunt of the rise in nominal bond yields and might also be vulnerable to a new wave of ETF liquidations. We continue to prefer industrial metals, such as copper and aluminum, over precious metals as the economic recovery is likely to give them a renewed demand push given still restrictive supply conditions. 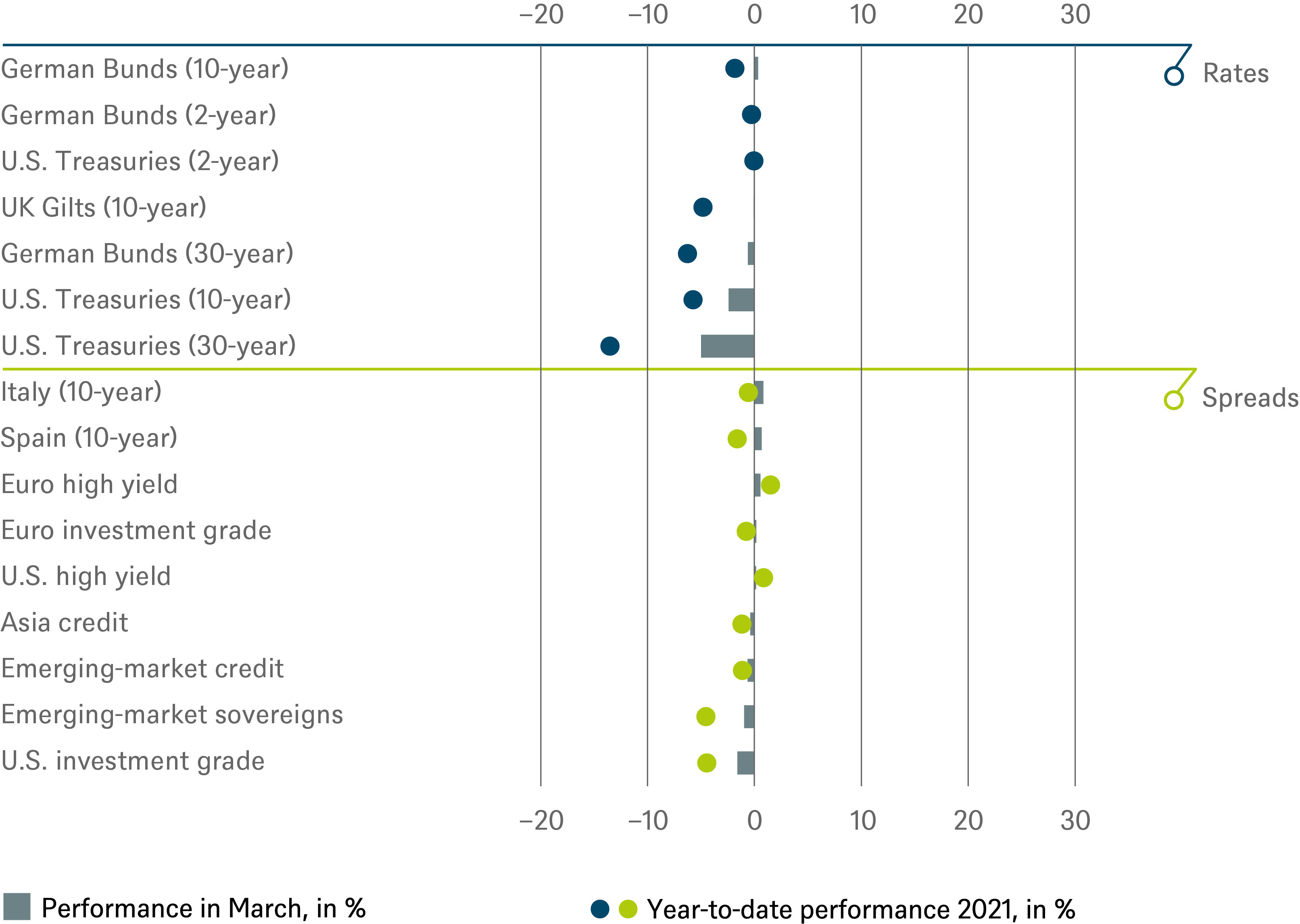 Past performance is not indicative of future returns.
Sources: Bloomberg Finance L.P., DWS Investment GmbH as of 3/31//21 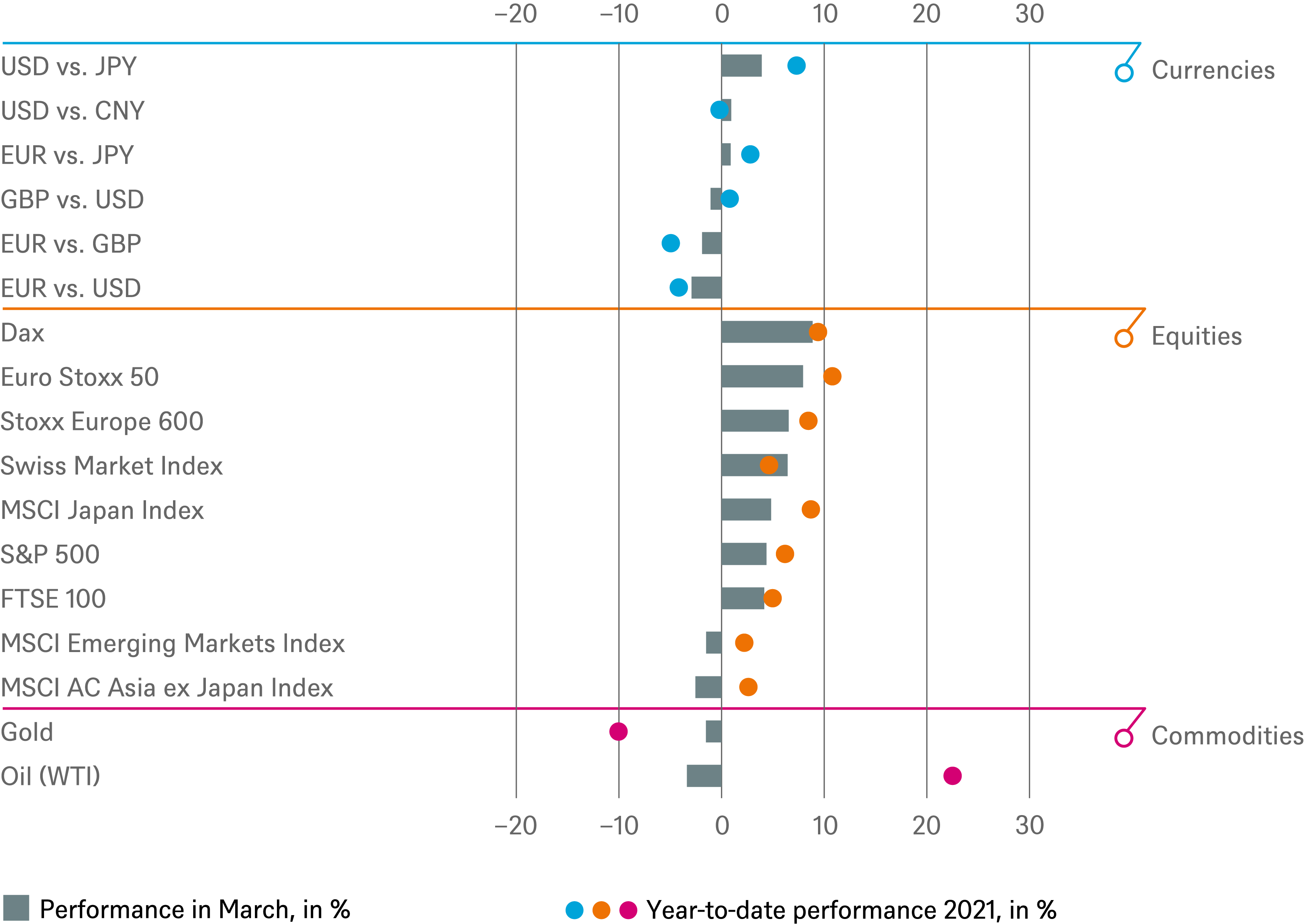 Sense and nonsense in pandemic times

How to think through both the long- and the short-term implications of Covid-19 for markets, the economy and forecasting: What we have learned so far.
Sep 20, 2021

A different sort of China shock?

What to make of Monday's market turmoil
Sep 20, 2021 Politics

Markets are barely reacting to the sharp change in the German Federal election odds. Rightly so?

3. See for example Turkey and its renewed replacement of its head of the centrtal bank; Brazil's mismanagement of Covid.

28. Relative
to the Bloomberg Commodity Index

You are now seeing the Netherlands version of the page despite being located in USA. You can change the country below.